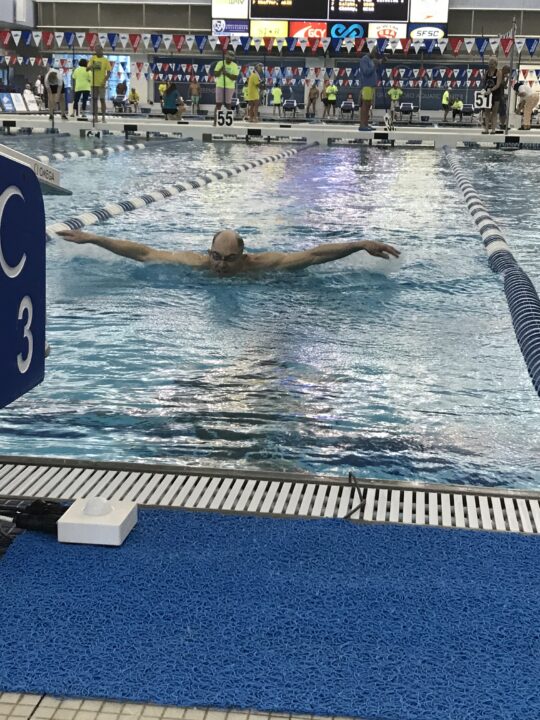 Bill Durell climbed out of the pool with ease following his first event Wednesday at the U.S. Masters Swimming Short Course National Championship in Greensboro, North Carolina. The 1,650 yards he had just swum hadn’t worn down the 70-year-old.

No, he doesn’t tire easily despite having done his entire race butterfly.

“It’s the weirdest event I’ve ever done,” he says. “That one is psychologically the most difficult to swim. The third and fourth lengths are the worst. The first two [lengths], you’re just getting in the water, but the third and fourth, it sets in: ‘Oh, my God, how many more do I have to do?’

“It’s just methodical. You just need to get in the groove. It takes about 20 (lengths) to do that. That is the only event I’ve ever swum where the further you go, the easier it becomes.”

Swimming butterfly or at a national championship didn’t seem likely for him not too long ago.

After swimming while growing up, Durell took several decades off from the sport. He started lap swimming about a decade ago, and when a Masters coach invited him to compete in a meet, he joined USMS in 2014.

Durell, however, had trouble settling on which events to swim.

“I’m not a gifted swimmer, not fast,” says Durell, who holds eight USMS Top 10 times. “You know the old saying, ‘If you’re not fast, you’ve got to be long.’ I thought, ‘What could I do if I can’t swim fast? I’m not a sprinter and not terribly fast at the long (freestyle) events. What is it that I could do that would be different yet would be long? Why not this?’”

Durell only learned how to swim butterfly at age 68 so he could do IM races, but he celebrated his 69th birthday by doing his first 1650 butterfly. His time of 39:20.90 on Wednesday, which placed him fourth in the 70-74 age group, was his personal best for a 1650 butterfly.

He describes the 1650 butterfly as meditative.

“It’s a combination of meditation and concentration,” Durell says. “I’ve found the only thing you should focus on is the breathing. In the butterfly stroke, the breathing is the absolute hardest of all the strokes. I’ve found if you don’t think about the number of lengths, don’t focus on the kick, the pool, anything. Focus on the breathing. And that’s what the meditation people do.”

Durell, a member of Minnesota Masters, trains extensively for his race, swimming 1,000 yards of butterfly five days a week. He usually does 7 x 50s of the stroke and then a 650 butterfly, though sometimes he’ll just do the 1,000 yards consecutively.

He doesn’t plan to stop swimming butterfly anytime soon. Durell hopes to become the oldest man to complete the Borboleta Challenge, a 1650 butterfly swum at an annual meet hosted by Palo Alto Masters. (Borboleta is Portuguese for butterfly.) The record is 74.

Durell, who also swam the 1000 freestyle doing freestyle later on Wednesday, recognizes that a 1650 butterfly isn’t for everyone.

“It’s kind of nutty to do something like that,” he says.

However, Durell recommends people try it.

“When I first started swimming butterfly, I could only do three (strokes) and then I was beat,” Durell says. “If I can do [it, then everyone can]. It’s a tremendous sense of empowerment.”

It’s a great accomplishment, even if he is swimming breaststroke with an over-water recovery.

This dude is awesome and giving me life goals

I get to race this man in August. What a legend. Mile butterfly!!!