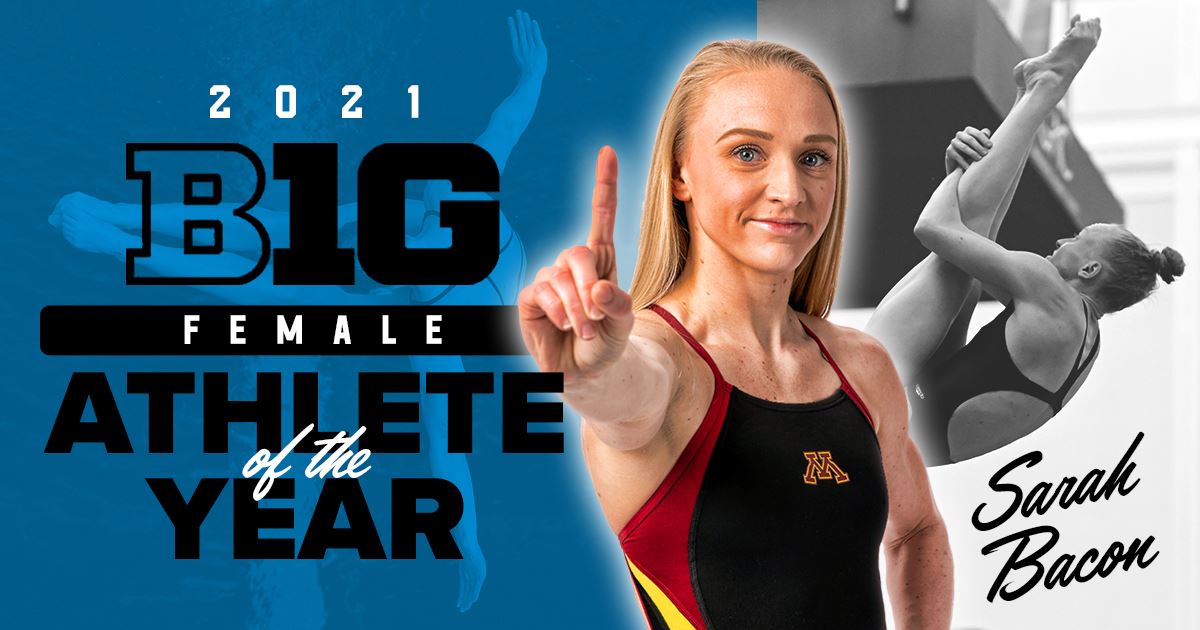 Tuesday's announcement makes Bacon only the fourth Gopher in any sport to secure the honor since the induction of the award in 1983, and the third since 2013. Current photo via Minnesota Athletics

“I couldn’t be more honored to receive this award,” said Bacon. “There are so many incredible female student-athletes in the Big Ten, it’s just amazing to receive this honor among them. I have to thank my coaches and teammates, as well as my family and friends for helping me along the way.”

Tuesday’s announcement makes Bacon only the fourth Gopher in any sport to secure the honor since the induction of the award in 1983, and the third since 2013, joining basketball’s Rachel Banham (2016) and hockey’s Amanda Kessel (2013). Minnesota swimmer Gretchen Hegener took home a share of the award in 1997 as well, making Bacon the second winner in program history.

Bacon is also only the second diver to secure the award and the first to do so outright, following Michigan State’s 1991 co-recipient Julie Farrell-Ovenhouse.

“Sarah is so deserving of any and all recognition she gets after the career she has had,” said Minnesota head coach Kelly Kremer. “She now has such a massive place in our history that we’ll need to build a room specifically for her! I’m really happy for her, she deserves this more than anyone.”

The Indianapolis, Ind. native earned the nod after an incredibly successful 2020-21 campaign, for which she has earned a multitude of awards at the local, conference and national levels. Those include:

The plethora of recognition came following the 2021 Minnesota team captain’s best collegiate season to date, which saw her secure NCAA titles on both springboard events at the Championships in late March. Added to her 2018 and 2019 titles on the one-meter, the pair of medals made Bacon the winningest-woman in Minnesota history with four national titles and only the third Minnesota athlete in any sport to secure three straight titles in the same event.

Since her historic performance at the 2021 NCAA Championships, Bacon has managed to turn eyes on the international stage as well. The success began for her at the 2021 FINA Diving World Cup, where she secured a silver medal on the individual three-meter along with a pair of Olympic quota spots for the upcoming 2021 Tokyo Olympics. She then went on to compete at the 2021 U.S. Olympic Diving Trials earlier this summer, where she claimed a pair of top-three finishes in both the individual and synchronized three-meter events with the help of her synchro partner Kassidy Cook.

Opposite Bacon for the 2021 athlete of the year award was Iowa men’s basketball player Luka Garza.