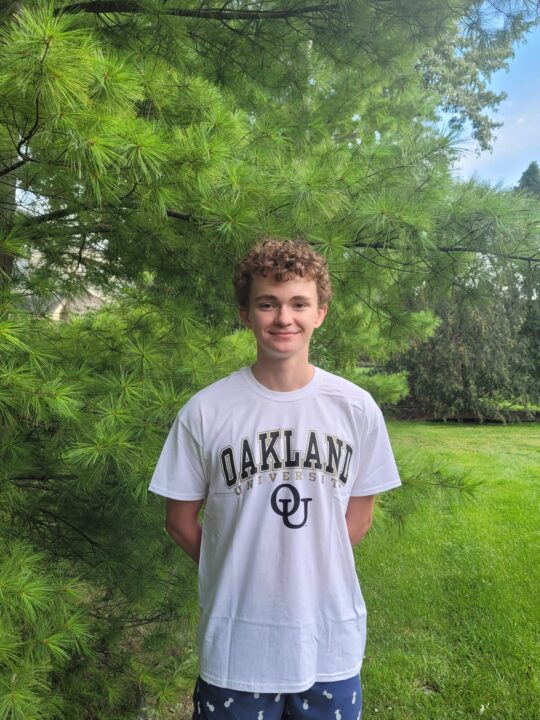 Choosing to attend college within his home state, Kieron Bezuidenhout has announced that he will be joining the Golden Grizzlies of Oakland University next fall. Bezuidenhout is from Novi, Michigan where he swims for the Spartan Aquatic Club.

“I am so excited to announce my verbal commitment to Oakland University! I chose Oakland because of the amazing coaching staff and the great team atmosphere. I would like to thank my parents, coach and everyone else who has supported me along the way. I would like to give a special thank you to my coach, Jamie Murphy, because I would not be here if it wasn’t for him. I can’t wait to join such a great team. Go Golden Grizzlies!”

Bezuidenhout is a distance freestyle specialist who gets better as the distance goes up. He also dabbles in open water races. At the 2021 Central Zone Open Water Championships, he finished in 9th in the 5k men’s open event, less than a minute behind the leader. His final time for that race was 56.28.79.

The Golden Grizzlies have sat atop the Horizon League for decades. The 2021 edition of the meet was no different, with the men cruising to a win over Cleveland State by 100 points. The team’s distance group was led by a junior last season, Ben Davis. After finishing with a pair of silver medals as a freshman and two silver medals and one bronze as a sophomore, Davis had a huge junior year that saw him bring home three gold medals with wins in the 200, 500, and 1650 freestyles. Unless Davis elects to make use of his additional year of eligibility, he will have graduated prior to Bezuidenhout’s arrival on campus next fall.

Bezuidenhout has the potential to a multiple event scorer when he joins the team in 2022. At the 2021 Horizon League Championships, his best time in the 200 free, 500 free, and 400 IM would have all been just outside of scoring range. He would have scored points in the 1650 however, with his best time being fast enough to have earned 9th in the event.

Oakland is led by Pete Hovland, who holds the distinction of being the second longest-tenured coach in Divison I. He has been at the helm of the Golden Grizzlies for over 43 seasons. Hovland is aided by the team’s recently hired associate head coach, Mitch Alters. Alters came to the team this summer after serving as an assistant coach at the University of Richmond.

Thank you so much!!!