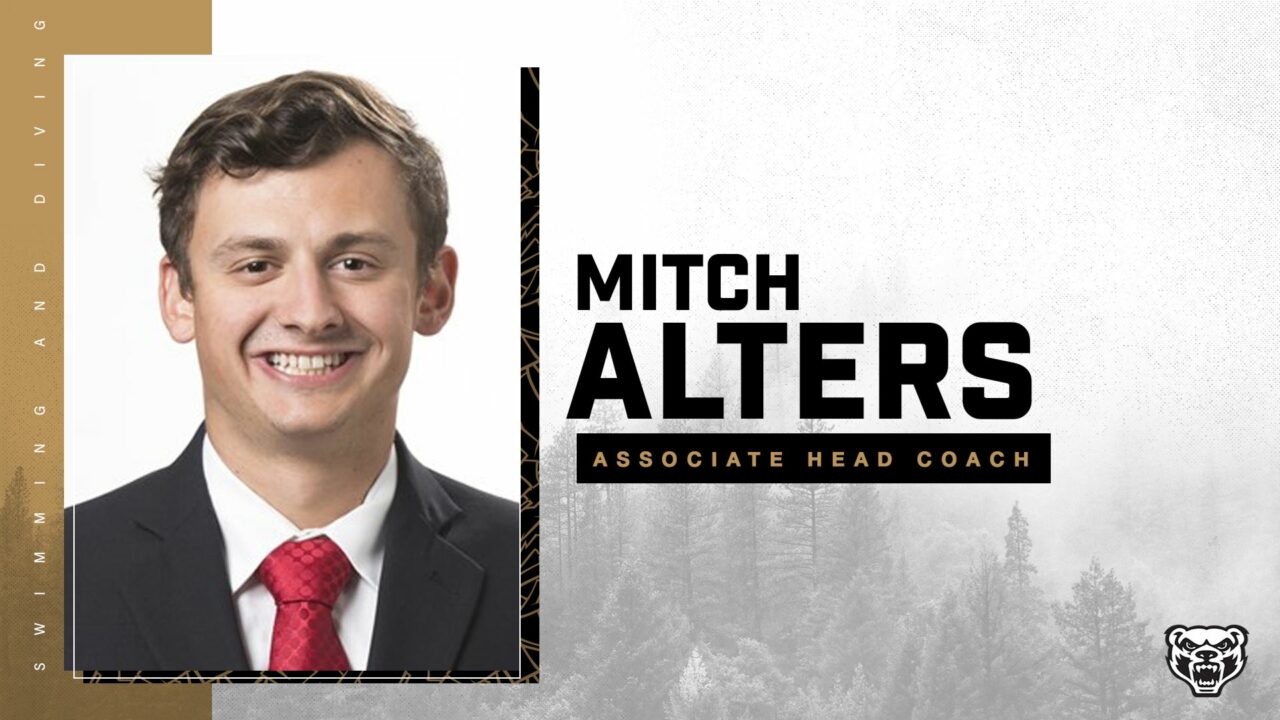 Alters joins Oakland after spending the last three years as an assistant coach at the University of Richmond. Current photo via Oakland Athletics

ROCHESTER, Mich. – Oakland men’s and women’s swimming and diving head coach Pete Hovland has announced the addition of Mitch Alters to his coaching staff. Alters joins Oakland after spending the last three years as an assistant coach at the University of Richmond.

“I am extremely grateful for the opportunity to return home to my alma mater. Oakland’s legacy of fast swimming and the strong focus on a positive student-athlete experience is unmatched,” Alters said. “It is an honor to take my experiences and continue to elevate the strong tradition of success this program has built within the Horizon League, the NCAA and beyond.”

Prior to his time with the Spiders, Alters served as a graduate assistant at the University of Arkansas and was a four-year letterwinner for the Golden Grizzlies from 2012-16.

“I am pleased to announce that Mitch has accepted my offer to become our next Associate Head Coach,” Hovland said. “Since Mitch left Oakland I have kept my eye on his development and progress both at Arkansas and again at Richmond. During the hiring process it was gratifying to hear the positive comments from both club and collegiate coaches that met Mitch for the first time and or that got to see him in action.”

While at Richmond, Alters was instrumental in the resurgence of the Atlantic 10 Champions. His recruiting efforts the last three seasons have been influential in producing the top freshmen classes in the A-10 as well as the Newcomer of the Year in 2021. His efforts in both coaching and recruiting helped guide the Richmond staff to earn ‘Coaching Staff of the Year this past year.

At Oakland University, Alters was twice selected as a team captain and a four-time conference champion. He was a College Swimming Coaches Association of America All-American Honorable Mention in 2016 and won the 200 fly at the Horizon League Championships. Alters was a Horizon League Academic All-Conference honoree and was named to Horizon League Fall Honor Roll three times.

As a graduate assistant at Arkansas, Alters oversaw and conducted workouts for the team and individual training groups, working with sprint, stroke and distance during the season with a focus on the sprint group. He also planned official and unofficial visits as well as coordinating team travel and compliance management.

While in Lafayette, Alters also worked with the Aquahawgs Razorback Aquatic Club as an assistant coach, where he worked with swimmers of all ages, focusing on technique and training habits. He also helped coach the senior level group during a transition phase for coaching at the senior level.

Other coaching opportunities including working as an assistant swim coach and swim instructor at Canton City Schools, Starting Line Health and Fitness and Heart of the Hills.

Alters earned a degree from Oakland in 2016 in exercise science and received a master’s degree in sports management and recreation from the University of Arkansas.

“His enthusiasm and passion for what he does will be obvious and contagious. He was a leader in every sense when he swam for me and I am excited to be reunited,” Hovland said. “Our alumni and our student-athletes are going to enjoy having Mitch on deck as a Golden Grizzly once again.”

“Thank you to Pete Hovland, John Ciszewski, and Steve Waterfield for their trust in me. Lastly, thank you to everyone else who has helped me get to this point,” Alters said. “I share this opportunity and success with you. I am excited to get to work, OU Pride.”