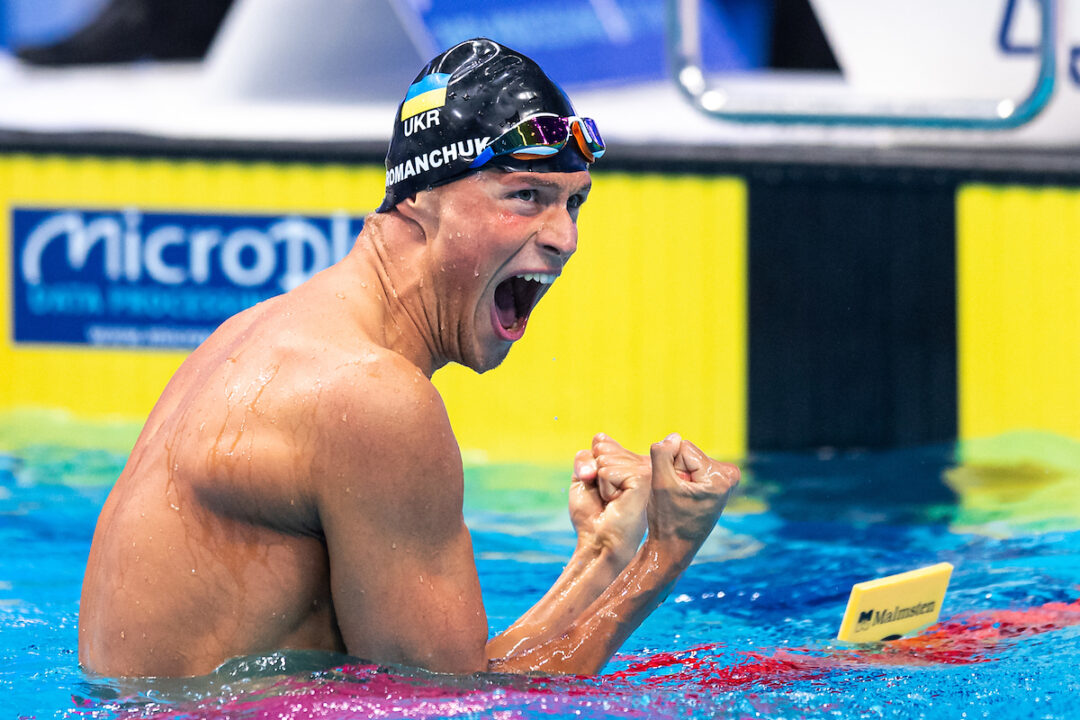 A slew of records fell by the wayside in the Olympic debut of the men’s 800 freestyle on Tuesday night in Tokyo, with Ukrainian Mykhailo Romanchuk emerging with the first-ever Olympic Record.

Romanchuk, 24, paced the fourth of five heats in a time of 7:41.28, lowering the mark established by Sweden’s Victor Johansson in the opening heat (7:49.14) to ultimately earn him the inaugural Olympic Record in the event and the top seed for the final.

The event yielded an unprecedented amount of National Records as well, including the top five finishers all lowering their respective marks.

This is no doubt due in part to the men’s 800 free recently becoming an Olympic event, meaning that as a whole, swimmers are giving the event more focus than ever before.

Germany’s Florian Wellbrock was second to Romanchuk in the heat in a time of 7:41.77, lowering his German Record of 7:43.03 from two years ago, while American Bobby Finke was third in 7:42.72 to extinguish the eight-year-old U.S. Record of 7:43.60 held by Michael McBroom.

Felix Auboeck then broke his Austrian Record of 7:46.72 in the final heat, clocking 7:45.73, and fifth-fastest qualifier Guilherme Costa of Brazil took down both the South American and Brazilian Records in 7:46.09. Costa had held both records previously in 7:47.37.

On the flip side of things we saw several of the medal favorites struggle through the heats, with 2019 world champion Gregorio Paltrinieri sneaking into the final in eighth place, more than eight seconds off his best time in 7:47.73.

Paltrinieri, Detti and Christiansen came in as the three fastest swimmers in this event since 2015.

Nope. His meet is over.

five second drop for Finke, hell of a swim. really looking forward to the final tomorrow!

The only person missing from that heat is Grant Hackett, and he would have won with a WR

Paltrinieri looked like he had absolutely nothing, but just gutted his way through it. Tough to watch. He was swimming incredibly well since the coaching change until he got hit with mono last month. Definition of bad luck.

I am heartbroken, never saw him this way during post-race interview… he had to rest for over a month in June and was not sure to go to Tokyo until a few days ago

Amazing he’s swimming this well but that’s no consolation for him.

Even considering that it’s the biggest stage ever for this event on the men’s side, that’s still one helluva prelims. 😲

Costa interview told he missed 400 by going out too slow and his coach was pretty angry about that. That he needed to focus more here and he want to go all out (Do or Die) on the final. That Scheffer and de Deus results are giving him a boost.