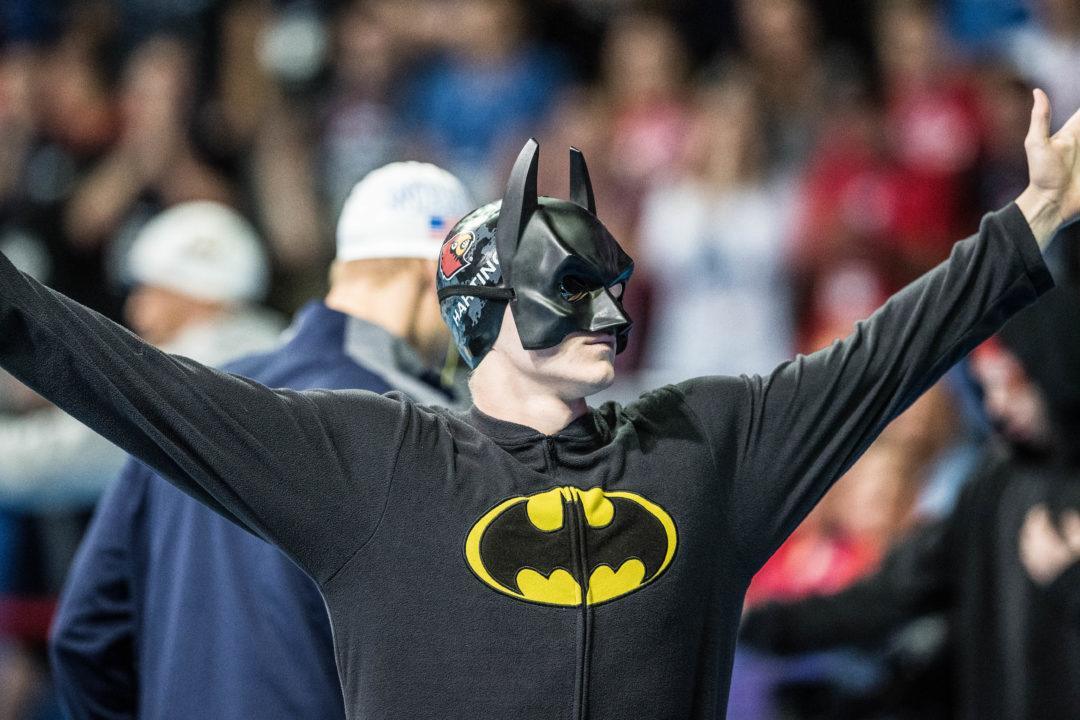 Gotham has been saved. Zach “Batman” Harting has officially qualified for the 2021 US Olympic Team after winning the men’s 200 butterfly. Archive photo via Mike Lewis/Ola Vista Photography

Gotham has been saved. Zach “Batman” Harting has officially qualified for the 2021 US Olympic Team.

Tonight, Harting touched the wall first in the 200 butterfly, adding a new title to his name: “Olympian”. “What was his motivation?” You might ask. “You get to sit on the lane line if you win!” Harting told reporters in his post race interview. Unlike Batman, Harting doesn’t mind some rule-breaking.

Harting’s Dark Knight first rose to prominence in 2016 when he made the final at the US Olympic Trials. At the final, Harting stole the show, making a superhero appearance in full costume. As the attention drew back to the pool, Harting fought his way through the water, posting a 7th place finish in the event.

Zach Harting as batman in the finals of the 200 fly at the Mesa Pro Swim Series stop (photo: Mike Lewis)

Harting is famous for his one-liners. After the semi-finals, he noticed himself and pointed out that “I look good on camera.”

Since the 2016 Trials meet, Harting has captivated swimming fans with his superhuman personality, with his alter-ego making several more appearances at major meets.

In addition, Harting has earned quite the following on social media, where his presence has provided several memorable moments (and many TopTen Tweets).

For the first time since the pandemic started a year ago, I have found Fruity Dyno-Bytes at Kroger!!!

I just tried making Mayo and unlike the Beatles song, it did not come together over me… I’ll be back better

Had to apologize to coach today for absolutely obliterating the set today.

PLEASE tell me I wasn’t the only one who noticed the batman logo with ZH on it on his cap. He had better pull up to finals in at least the mask

Watching him become an Olympian and knowing what he and his family have been through, is worth every cent I have spent in this past week.

I swam with Zach growing up. He’s one of the most humble, hard working guys. He’s always been goofy, he wore a pair of bright yellow crocs as a good luck charm for the majority of his career. If we’re ok with girls doing a Beyoncé dance to get in the zone, I think he can wear a Batman onesie.

Harting is a refreshing and interesting guy. Adds some personality to a sport that, let’s admit it, has highly accomplished athletes that are perceived by the general public as mostly boring.

Whatever floats his boat….but he better back it up. Loosen folks and have some fun!

Unlike Harting, all the other men in the 200 Fly are going down!