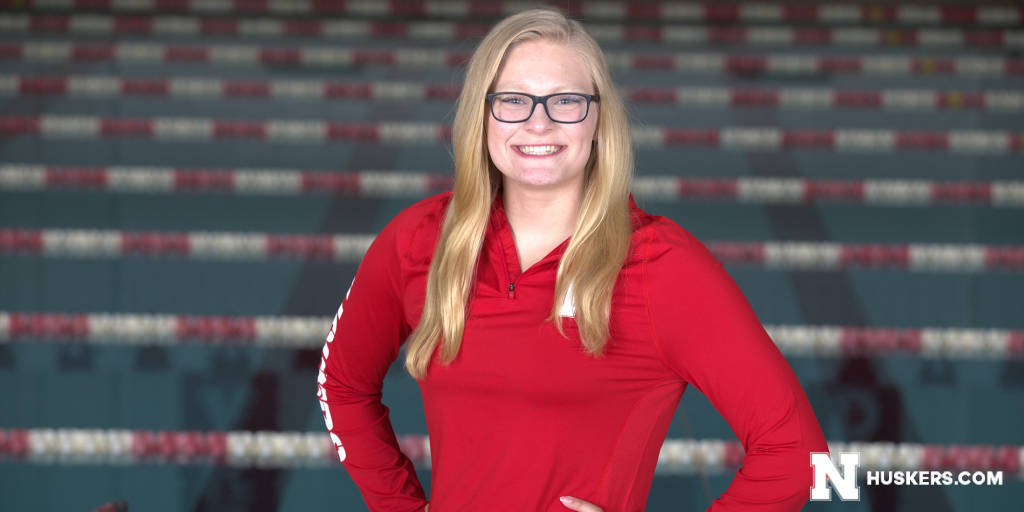 Nebraska's Autumn Haebig was triple event winner, taking the 100, 200, and 500 frees for the Huskers. Stock photo via Nebraska Athletics

Nebraska traveled to Iowa City on Saturday for a dual meet against the Iowa Hawkeyes. Wisconsin was also set to participate in the meet, however, like Michigan State, they had COVID issues among the roster, and had to withdraw from the meet for safety purposes. That left the Iowa men’s team without an opponent, so they competed yesterday as an intrasquad meet.

Iowa sophomore Julia Koluch swept the backstroke events. Koluch clocked a 54.91 in the 100 back, touching as the only swimmer in the field under 56 seconds. She went on to swim a 1:59.11 in the 200 back, winning by nearly 3 seconds.

IOWA CITY, Iowa – The University of Iowa women’s swimming and diving posted a 170-128 victory over Nebraska in their season opener Saturday at the Campus Recreation and Wellness Center. The Hawkeyes won 10 of the 16 events.

The Iowa men competed in an intrasquad meet after Wisconsin withdrew from the competition because of Covid concerns.

“The women took advantage of the opportunity, stepped up and had a great win today,” said head coach Marc Long. “We want to keep moving forward and take advantage of every opportunity we have. Today we had an opportunity to race and they did a great job with it.”

STRONG START
The Hawkeyes started of strong with a win in the first event of the afternoon in the 200-medley relay. The relay consisting of sophomore Kennedy Gilbertson, sophomore Aleksandra Olesiak, senior Kelsey Drake, and junior Lauren McDougall posted a winning time of 1:42.76.

It was the first of 10 event victories.

UNDERCLASSMEN MAKE A SPLASH
The Hawkeye underclassmen had a great all around showing in the dual. Freshman Alyssa Graves won the 200 fly, edging Drake, with a time of 2:01.38 and she was second in the 500 free (4:52.13). Freshman Alexa Puccini had the best time of the day in the 200 IM (2:06.00), but she swimming the event as an exhibition.

UP NEXT
The Hawkeyes return to action next weekend, traveling to Evanston, Illinois, for a tri-meet against Northwestern and Penn State.

The Nebraska swimming and diving team opened up the season with a close 170-128 defeat against Big Ten foe Iowa on Saturday afternoon. This was the first action of the new 2021 campaign for the Huskers, who still managed to succeed against a tough Hawkeye team in their hometown of Iowa City.

Nebraska saw some similar faces rise up to the ranks, as seniors Autumn Haebig and Abi Knapton, along with junior Audrey Coffey, all secured victories in their respective events earlier this afternoon.

Haebig began her successful stretch of three victories in the 200 free, where she swam to a first place finish with a time of 1:46.82. Kim Lanaghen was the next Husker to finish, rallying in fourth (1:51.52).

In the 50 yard free, two Huskers placed in the top four, with freshman Lexi Kucera earning a great second place finish (23.59), falling to Iowa’s Sarah Schemmel by a tenth of a second. Fellow freshman Caitlin Cairns swam to a fourth place finish (23.90)

Coffey already looks to be in mid-season form after receiving her victory in the 1000 free, swimming to a quick time of 9:53.80. Coffey already holds the Nebraska record in the 1000 free, conquering that achievement last year. Her time today would have been good for second all time, if she hadn’t already held the top spot. Katelyn Kilpatrick followed up the nice performance, landing in third (10:13.35), while Molly Rosenthal finished in fourth (10:13.73).

In the 100 fly, it was senior Izzie Murray who swam to a good second place finish (55.12), followed by Lexi Kucera who finished right behind in third (55.46). Maggie Berning was the first Husker to finish in the 200 fly, where she swam to a third place finish in a tight race, with a time of 2:02.04. Berning was followed by junior transfer, Shannon Stott, who finished in fourth (2:03.22), in her first official race as a Husker.

In the 100 backstroke, Boise State junior transfer Madesyn Ronquillio grabbed fourth place (56.25) and Gabby Donahue landed in fifth (57.57). Berkeley Livingston would be the first Husker finisher in the 200 back, grabbing fourth (2:05.68).

Abi Knapton led the charge on the diving boards, as the Huskers had a great performance all day in the deep water. In the one meter dive, Knapton was victorious after securing a score of 298.15. Junior Sara Troyer followed up with a good third place score of 276.25. Hallie Roman dove in fourth for the Huskers (260.30).

In the three meter dive, it was again Knapton who took first, diving to a winning score of 343.55. Sara Troyer came in second place, diving to a score of 321.90 and Hallie Roman captured fourth with a score of 270.40.

In the relays, the Huskers performed well, capturing second place in both the 200 yard medley and the 400 yard freestyle relay. In the 200 medley, it was Madesyn Ronquillio, Ella Stein, Caitlin Cairns and Lexi Kucera (1:43.79). The 400 free was led by Autumn Haebig, Lexi Kucera, Caitlin Cairns and Shannon Stott (3:27.35).

The Huskers drop to 0-1 on the season, but will try and even that record at home next weekend. Nebraska will host the Illinois Fighting Illini at 11 AM on Saturday, January 23 for Senior Day at the Devaney Natatorium.

Neb breaststroker quit in December. I’m sure that didn’t help