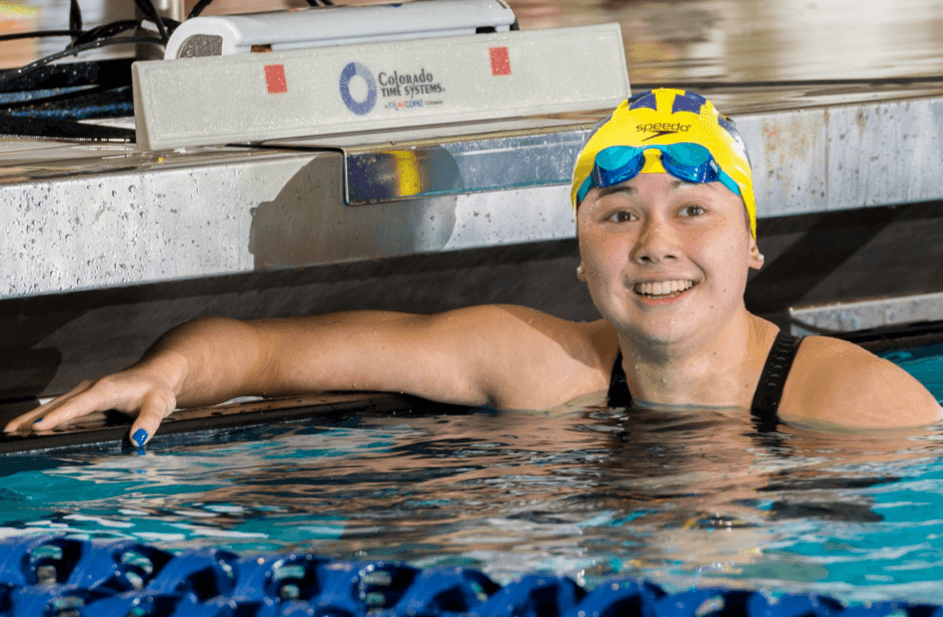 All-American Siobhan Haughey had an impressive showing to start the season. She won both the 200 free (1:45.7) and 100 free (48.5) by nearly 5 seconds. Archive photo via Michigan Swimming

All-American Siobhan Haughey had an impressive showing to start the season. She first stepped up for the 200 free, dominating the event by nearly 5 seconds. She was the only swimmer to break 1:50 today, turning in a speedy 1:45.71 for the win. Haughey’s next conquest came in the 100 free, where she turned in a 48.57 to outpace teammate Catie Deloof (49.26).

Butterflier Vanessa Krause also picked up multiple individual wins for the women. Her first victory came in the 200 fly, where she posted a 2:01.14 to win by over 2 seconds ahead of teammate Rose Bi (2:03.36). Next, she went up against teammate Alexis Margett in the 100 fly. Margett lead by a hundredth at the halfway point, but Krause was slightly better on the back half, winning the race in 54.98 to Margett’s 55.08.

On the men’s side, Jacob Montague was the top performer, bringing in 3 individual titles. Montague swept the breaststroke races, first putting together a 55.02 in the 100 breast and then finishing off the sweep with a 2:00.36 in the 200 breast. He finished off his triple with a win in the 200 IM, touching the wall in 1:50.71 to stay perfect throughout the session.

Sophomore Kai Williams used a furious kick down the last 25 yards to overtake junior Mokhtar Al-Yamani for the 200-yard freestyle, less than a tenth-of-a-second separating the two at the wall (1:38.14, 1:38.22). Another sophomore, James Jones, was the other individual winner in the pool, taking the 100-yard freestyle (44.68).

In the diving well, sophomore Jake Herremans and freshman Ross Todd each claimed a win: Herremans with a career-best performance on one-meter (351.60) and Todd on three-meter with a score that would’ve been a team-high last year (369.15). One meet in and both men have already achieved their NCAA Zone Diving qualifying scores on both the one- and three-meter springboards.

Michigan also swept the relays. The team of Sanders, Montague, junior Jon Burkett and Powers came in at 3:18.13 in the 400-yard medley relay, while Al-Yamani, sophomore Alex Martin, Sanders and Powers were clocked at 1:21.34 in the 200-yard freestyle relay. Of note in that final swim was freshman Luiz Gustavo Borges, who anchored the ‘A’ team in a team-best 19.69.

Coming off a fantastic summer on the international stage, junior Siobhán Haughey didn’t show any signs of rust, easily winning the 100-yard freestyle (48.57) and 200-yard freestyle (1:45.71), the latter coming by nearly five seconds. Both times cleared the NCAA ‘B’ standard. Sophomore Vanessa Krause was the other swimmer to win multiple times, claiming the 100-yard butterfly (54.98) and the 200-yard butterfly (2:01.14).

It was also a night of firsts. In her first individual swim as a member of the Maize and Blue, junior Taylor Garcia, the transfer from Arizona, touched out senior Clara Smiddy to win the 100-yard backstroke (54.03). Later in the meet, it was Ann Arbor native Emma Cleason who got her first collegiate win, taking the 200-yard IM (2:05.10).

ANN ARBOR, Mich. – Joe Smith placed second in the one-meter diving competition with a score of 342.82 to led the Golden Grizzlies as the Oakland men’s and women’s swimming and diving teams dropped a dual meet against the University of Michigan Friday at Canham Natatorium. Cassie Misiewicz placed second in the 100-yard butterfly with a time of 1:00.16. The Oakland men fell to the Wolverines 203-91, while the women’s squad was defeated 203-90.

The Black and Gold return to the pool Saturday for the Michigan Water Carnival beginning at 11 a.m. at Canham Natatorium. In a celebration of aquatic sports, the non-traditional competition will feature Oakland, Calvin College and Michigan while swimming, diving, and water polo will compete at the same time.

Those are amazing early season times! NCAA A cuts?

That carnival sounds fun. Wish they had that when I was there.

Didn’t see 3rd “Deloof” swimming?? I think she’s a captain, was she sick?? Also is Emily Eastin still at MI?? Didn’t see her either??

Eastin isn’t listed on their roster, but we’ll reach out to check.