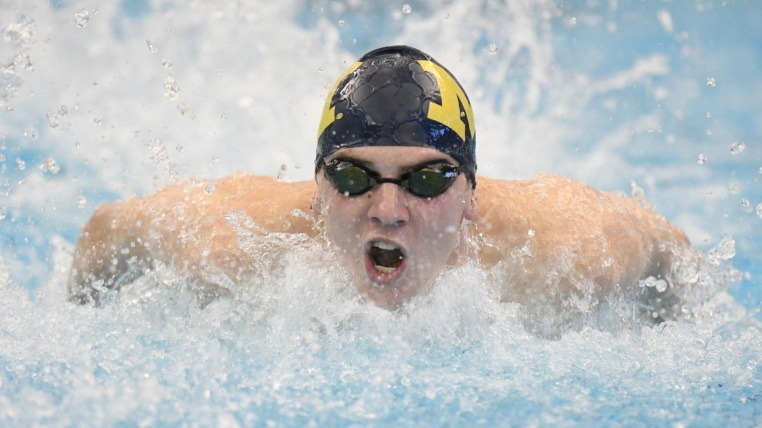 While the Michigan men had their winning streak snapped by Indiana at the 2017 Big Ten Championships, the Wolverines' future looks bright based on the performance of their freshman class. Archive photo via Michigan Athletics 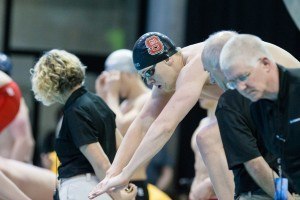 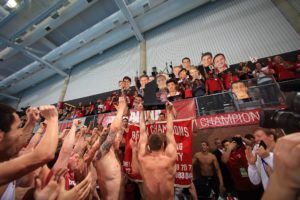 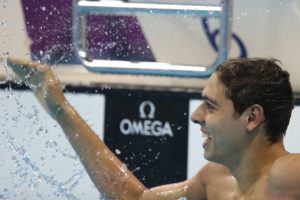 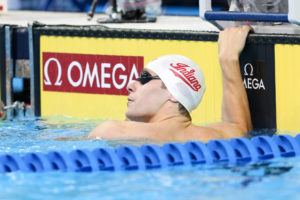 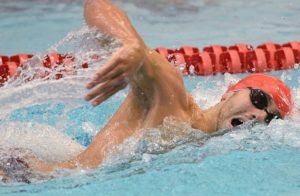 While the Michigan men had their winning streak snapped by Indiana at the 2017 Big Ten Championships, the Wolverines’ future looks bright based on the performance of their freshman class. The 9 freshman scorers combined for 423 points, 413 of which came from the swimmers.

One of the most impressive performers was Felix Auboeck, who was named Big Ten Freshman of the Year. Auboeck took down Peter Vanderkaay B1g Meet Record, winning the event in 4:10.63. He then went on to win the mile in 14:29.25, making him the 10th fastest performer ever in the event and the fastest freshman ever. Auboeck also won a bronze medal in the 200 free (1:33.27).

Auboeck is not your typical freshman. From Austria, I believe he was born in Dec.1996 which would make him 20 yrs old.

what is your point SUNY CAL….?

The point is Michigan brings in “freshmen” who are grown men 20 plus years of age.

He was 19 when he started school at UofM, which is not what I would call a “grown man”. Also, it is not ridiculous for somebody to take a year off after graduation to focus on something other than school. I’m not sure if that was the case for Felix because some European schooling systems go longer than the standard American system. If it was the case he took time off, be sure to criticize Katie Ledecky also!

He turned 20 three months after school started so yes he is more mature/ stronger than your typical freshman. Since men mature much later than girls it’s not fair to compare to KLedecky taking yr off.

While I think the obsession with Auboeck being 20 isn’t really warranted (though it is important to note that he’s older), Michigan still has an incredibly stacked freshman class. The point to take away here is the direction that Michigan will likely go (up!) with its freshman class.

Hemming and hawing about the legitimacy of someone who is still in his very first year at Michigan and under Mike Bottom shouldn’t detract from the impressive weekend by the Michigan rookies.

I see you’re very worked up over a 19-20 year old being a freshman instead of a sophomore. I understand, but that’s your opinion (although I will note it’s not any different than being a redshirt freshman)

That being said, please, for the love of God do not look at the D2 National meet results next month. Or, at least for our sakes, disable your keyboard after looking at them so we don’t hear your inevitable rant!

Its pretty common to see internationals as old as 23 or even 24 by the time they are seniors. You just have a problem with Michigan for some reason. This is not an issue. If you want to pick this fight, take it to division II. I swam D2 and when I was 18 years old I had to race a 29 year old in the 100 fly at our conference championships. They have gotten tighter on many rules but age is still a big factor in many of the top ranked d2 teams.