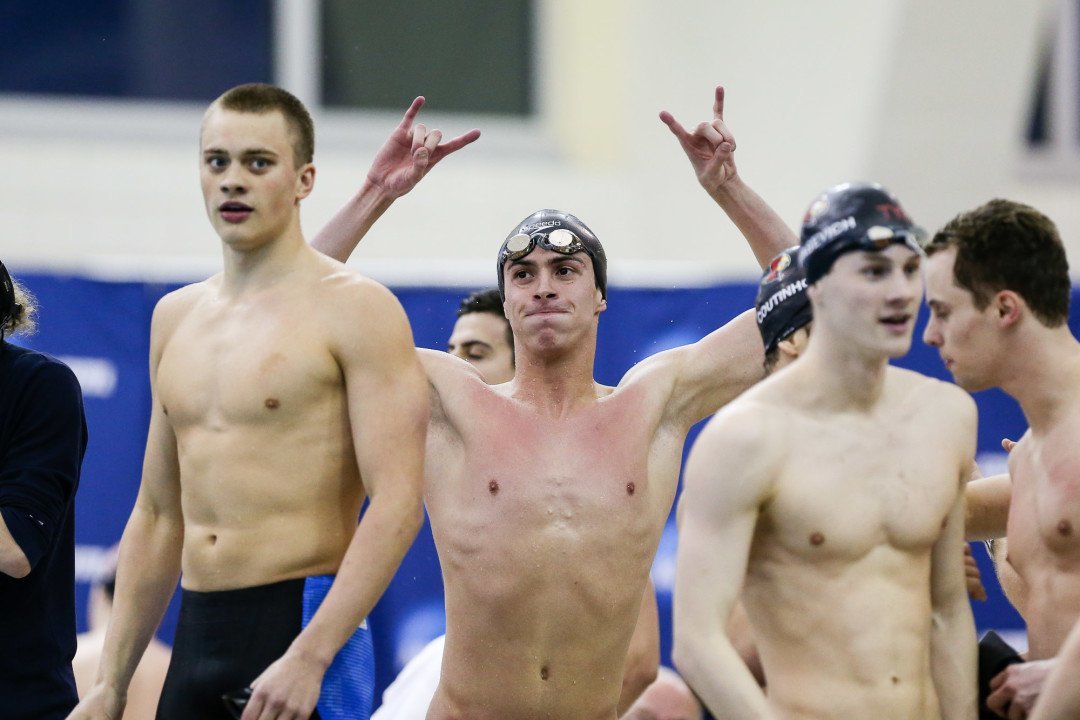 Townley Haas, last year’s NCAA champion in the 500 and 200 free, will be tackling some tough teammates in the 100 free today, the final day of the 2017 Big 12 championships.

The 2017 Big 12 Swimming & Diving Championships is in the books, and unsurprisingly, both the Texas Longhorn men and women took home conference championships for the fifth straight year.

There was some concern earlier in the season that the two-time defending NCAA champions Texas men might be vulnerable after they lost dual meets to Indiana and NC State and a few key swimmers were out.  Yet, the Longhorns’ elite core — Jack Conger, Townley Haas, Will Licon, Clark Smith, and Joseph Schooling — all appeared to be in great shape and returning NCAA points scorers, like Brett Ringgold, Jonathan Roberts, and John Shebat, all looked sharp this week as well.

Most of those men had secured NCAA cuts before this meet, so there was no reason they should be anywhere close to fully rested, and should be capable of even more improvement come NCAA’s next month.

While the ACC and Pac-12 men still have their championship meets coming up this week, as of the moment, the Longhorns have at least one man among the top 10 in Division I in every single individual event, and could conceivably put a swimmer into the A-final of all 13 individual events next month.

Whether or not that happens depends partially on how Coach Eddie Reese decides to structure his lineup.  Jack Conger looks to be done with the backstrokes completely, as he doesn’t have a single 100 or 200 back time in the NCAA database this season.  There is still a chance he could throw down a swim at next week’s American Short Course Championships, or he could swim all five relays, or he could try out the 50 free on day 1.  Joseph Schooling also has some options after recording the 2nd-fastest 50 free time this season on Thursday.  Coach Reese has some decisions to make about other swimmers, including Will Licon and John Shebat.

The Longhorn women are also looking sharp, as they have been all season.  The key for Texas will be continuing their momentum into next month’s NCAA championships.  Last year they had the biggest drop between projected scoring based on the psych sheet and actual score, at -63.  Tasija Karosas had some health issues during the meet that cost the Longhorns a good chunk of those points, but several other swimmers were a bit off their seed times and just missed out on finals swims.

Currently Karosas, Rebecca Millard, Joanna Evans, Claire Adams, and Remedy Rule are all ranked in the top 16 nation-wide in at least one event, mostly thanks to swims from this past week.  Madisyn Cox in one of the best IMers in the country; a 4:01 400 IM usually would have received much more attention — it just happened to be the same day that Katie Ledecky broke the American Record in the event.

The Longhorns have four relays ranked in the top 8 in Division I, and their fifth relay is well inside the top 16.  If they can replicate those times in prelims next month and make the championship finals, they could be knocking on the door of a top five finish at NCAA’s.

Here is my bold prediction:

Conger wins the 200 fly at NCAAs. Here is my reasoning: Coach Reese stated in an interview that several of his Olympians eased back into training and that Schooling didn’t round into form until the Arizona dual meet. Indeed Schooling competed less this year than his teammates. I think Schooling is very close to fully rested right now and that is why his times were so fast.

I suspect Conger has been training hard all year. I don’t believe he missed any meets. He will go faster still than his 1:39.1 here at Conference. He will go a 1:37, set a new American and NCAA record, and will win.

Schooling may nip him in the… Read more »

Doesn’t seem like an unreasonable prediction. I would not be the least bit surprised if Conger won the 200 fly this year.

Of course, Schooling is both competitive and clutch to an inhuman degree.. A deadly combo in any race, so it really is up in the air even though it is likely Conger has had better preparation.

I’m pulling for Conger to finally win something, but either way it should be an exciting race.

I think Texas has just a touch more depth than Cal (probably the biggest challengers), and they’ve improved where they were weak last year. Licon covers the breaststrokes very well, and Shebat/Roberts are improving nicely also so they can cover the backstrokes. Same with guys like Ringgold and Newkirk. Texas will probably take all three free relays, with a possible challenge from NC State, though they lost Bilis which is huge, and Schooling went a 18.7 from a flat start so…
Cal is better in backstroke, obviously, and they have strong IM as well, with Murphy and Seliskar especially. They are definitely a huge factor in the medley relays.
I’m still going with Texas, as I imagine most… Read more »

The only question after March will be how would this texas team have done against the team with fiegen berens Walters, or perhaps the Aaron P, Crocker,Hansen team? Hook’em forever, champs by 100 points

Considering Licon beat Hansen’s 100 breast record with the first 100 of his 200 last year, they would probably smash both of those old teams. Longhorns are stacked

Cal stacked, too. The Horn divers may be the difference thia year. If Anderson can acore 35 again this year, and Grayson Cambell add another
15, their 50 pts. might be the difference. Backstrokers only scored 18 total last year. Shebat and Roberts should increase that total this year.
Can’t wait for N.C.’s!

I would also add freshman Lauren Case to the list of “ranked in the top 16 nationwide”. She had a great Big12 Championship, Newcomer of the Year.

All I should say is, I hope they bring their A game. #STATEment

When NC state gets 3rd-5th next month will you finally shut up?

He or she won’t… a fan could just be that proud of his/her team. That’s why we love our sport!

We’re talking about a team that was 9th in the conference not too long ago and now challenging for top 4 finish at NCAA every year.