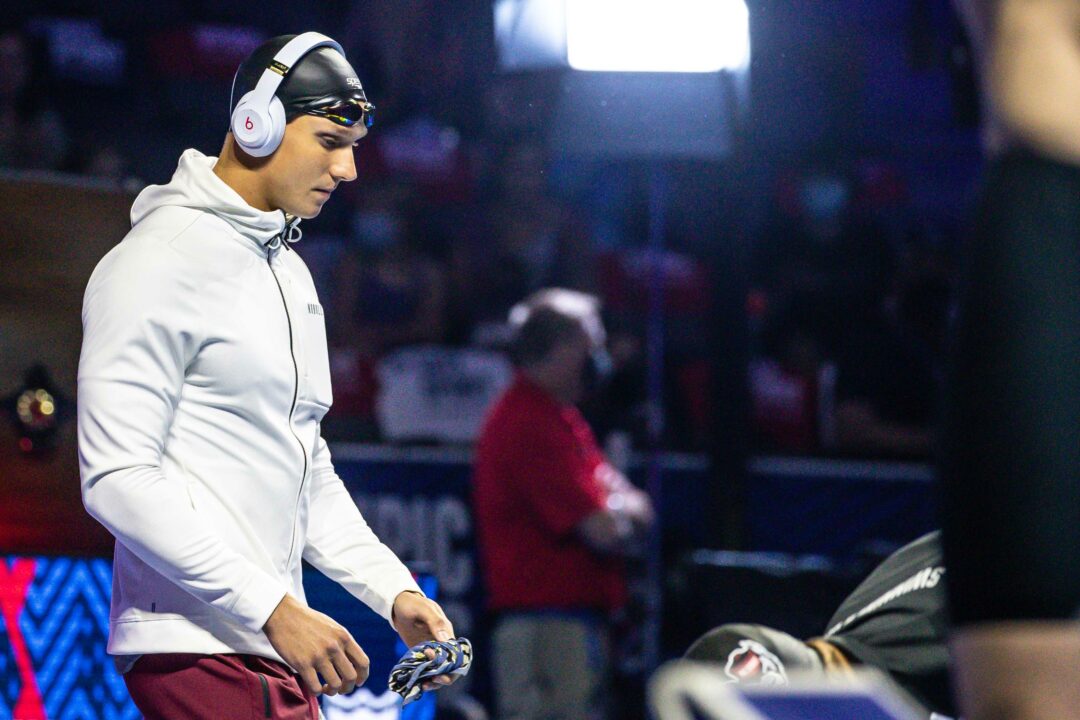 The British men missed out on the final of the men’s 400 free relay on Day 2 of the Tokyo 2020 Summer Oympics. While this was the weakest of the three men’s free relays, they certainly had a chance at a medal – enough so that they held Joe Litchfield out of the 100 backstroke to focus on this race.

That ultimately proved to be the wrong decision, but had they used, say, Duncan Scott in that slot, we’d still have seen a significant miss: the team that was just .03 ahead of Great Britain, in 8th, are heavy gold medal contenders Russia.

It was the Italians who stole the show in the morning for the top seed, while the Americans took care of business and have left their coaches with a much easier decision than the women did earlier in the meet.

There is a lot for the Italians to be excited about here, especially the 47.29 leading split from Lorenzo Zazzeri, who grew famous during the pandemic for his art as much as his swimming.

The team has one swap to make, bringing in Thomas Ceccon after the 100 back prelims, but with Santo Condorelli swimming well – it’s not totally clear cut as it might have seemed on paper. I still suspect that move will happen, but it’s at least a gamble.

Miressi is locked in, missing the Italian Record by just .01 on the leadoff leg.

The Americans have left coaches with a rather easy to decision to make for finals. With no “non 100 freestylers” really in serious consideration here, and the 6th-place finisher from Trials Ryan Held being left home because of roster limit rules, this is a straight-forward swap: Caeleb Dressel jumps in for Brooks Curry on the leadoff leg and uses his electric start to get the Americans off to an early lead.

It feels, based on this order, that the US coaches knew this was coming, and got their order prepped for where they wanted it. This continues the improbable run of Bowen Becker to a likely Olympic podium. He was retired and bussing tables in a restaurant earlier this year, and is now going to be swimming for Olympic gold.

Cam McEvoy continues to struggle to follow-up on his 47.04, but he did enough to get the team to finals. This is not a great men’s relay field, luckily for the Australians, and with the Brits out and Russia struggling, they might be able to absorb that Alexander Graham 48.44 if repeated in finals.

They’ve got one swap to make, Matthew Temple, which probably holds them in a strong medal position, but it will be down to Graham to find another few tenths if they want to do better than that. It’s worth acknowledging that his flat-start best is 48.65, done at Trials earlier this year, so that isn’t a direct criticism of him – he had a good swim by his own standard – but it looks like maybe the Australians are a leg short of contending for gold – even with that huge anchor leg for Chalmers.

The French relay did well, and avoided the disappointment that their women had to not final on the first chunk of the meet.

Mignon was flat, though, and Metella is still not back to where he was pre shoulder injury.

There’s one gamble available for the French: using their 50 freestyle ace Florent Manaudou in finals. He has been 47.9, but 48.58 from June’s Trials is his best in the last 5 years. On the one hand, it’s their best chance at a medal, on the other hand, they may not risk Manaudou’s individual 50 free chances without a surer path to medal.

Not much do be done here for Brazil. Breno Correia dropped the 200 free to focus on this race, but this is pretty much the team they’ll take into finals and about what we’ll expect based on recent results.

Milak has been 48.00, Szabo has been 48.45 on a flat-start and 47.8 on a split, Bohus has been 47.2 on a split, and Nemeth has been 47.1 on a split. That adds up to about 2.4 seconds that they could find here, which could put them into medal contention if they chase it down. A better evening swim will also be crucial for them to build momentum for the rest of the meet.

Markus Thormeyer missing the semifinals of the 100 back takes the decision-making out of this for Canada – he’s now an obvious swap onto this relay for Ruslan Gaziev, who was the slow leg in prelims.

Thormeyer’s presence, depending on how he’s performing, could get the Canadians half-a-second or more. A medal is a stretch at this point, but this will be crucial to build momentum with hopes of a similar Canadian rise over the next quad to what the women saw before Rio.

The team that had to be the favorite entering the meet snuck in by the skin of their teeth to the final.

Now the Russian coaches have choices. Kolsenikov comes on for Shchegolev for sure, even though Kolsenikov has a double on the 100 back semifinal (and we saw him struggle with doubles at the European Championships).

It’s a challenge for Russia, because their other ‘next choice’ is also a backstroker – there aren’t a ton of backstrokers on men’s 400 free relays globally.

So do they swap in Rylov for Grinev? And do they swap in Girev for Morozov the veteran who has split a 46.6? If the Russians don’t find some fire for the final, it might be moot anyway.

Hungary could possibly swap in Dominik Kozma. He didn’t have a great 200 free, but he’s at this meet and his best 100 free split is 46.72

Does anyone know how Canada plan on using Acevedo? They brrrght. Him as alternates for this relay but wisely didn’t use him.

Here is a thought: Santo Condorelli leads off for Italy, gets out, changes cap and close for Canada

This would seem to be about how much difference Ceccon and Dressel make to their respective teams. Dressel is obviously a big asset. All the same, he normally doesn’t swim his fastest early in the meet and Ceccon is on a bit of tear.

Beyond that, I wouldn’t quite write off the Russians. They were even worse in the heats at the Europeans and then went 3.10.

Colossal mistake by UK coaches. Some explaining to do.

This final is gonna be exciting. Interesting to see how Russian Backstrokers hold up on the double. This finals session could also hint a lot at rylovs endurance, which he will need for the 2 back.

Brazil have Andre Luiz De Souza as their fastest on flat-start with 48.09. But I don’t know if he will take part in this olympic.

Not sure if trolling. Souza was caught doping at Brazilian trials. He’s going to be gone for years.

I didn’t know that. Thanks for telling me