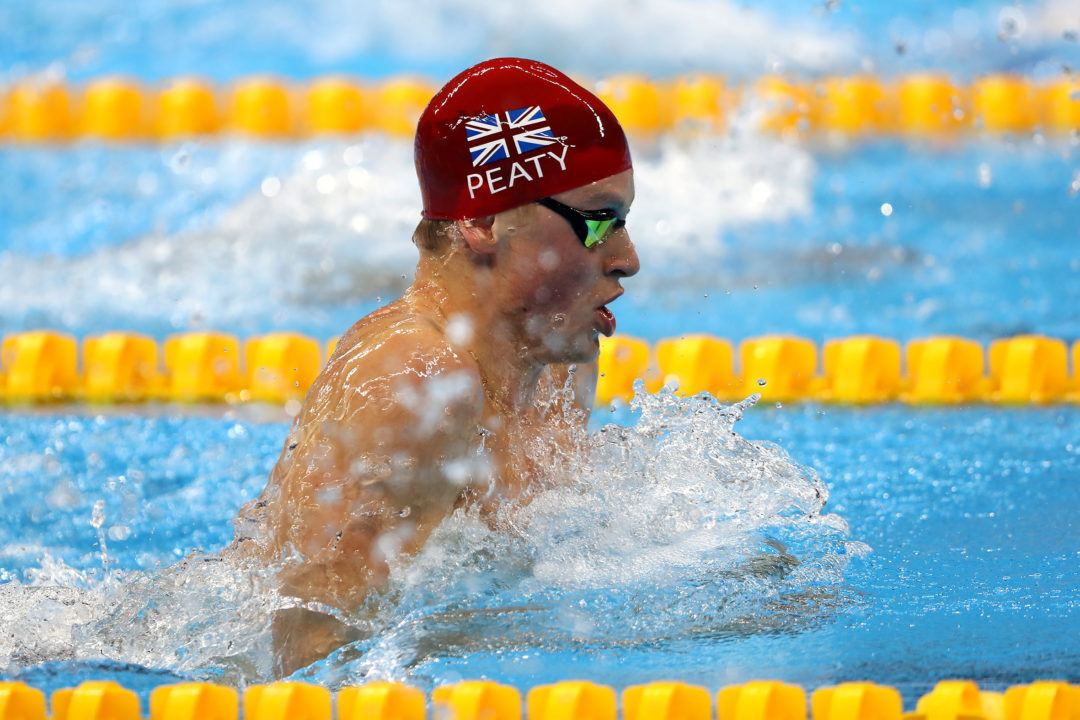 After seeing of what British breaststroking Olympic champion Adam Peaty is capable, it was fun to see what the star would produce in his first meet back at it after his World Championships journey. The 22-year-old Loughborough athlete who owns the men’s 100m breaststroke WR in the other-worldly 57.13 from Rio, earned the top seed in the men’s 18/over 100m breaststroke this morning with a mark of 1:00.11. He then dropped his time down under the minute threshold tonight to easily win the event in 59.88.

Splitting 27.73/32.15, Peaty comfortably beat the field by well over a second, with the next-fastest competitor, James Wilby, touching the wall in 1:01.15.  Peaty is set to lead tomorrow’s 50m breaststroke field in Manchester, so we’ll see what kind of raw speed the Brit has this early in the season.

One-time British national record holder Molly Renshaw took the women’s 200m breaststroke tonight in a time of 2:29.17 to represent the only swimmer under the 2:30 mark in the race. Olympic silver medalist in the 200m IM, Siobhan-Marie O’Connor of Bath was next in line with a time of 2:30.77 for silver.

O’Connor also raced in the women’s 50m butterfly, where she settled for another early-season silver in 27.19. The fly splash n’ dash victor tonight was Loughborough’s Marie Wattel, who fired off a mark of 26.59 for the win. Wattel was also the 100m freestyle winner tonight, taking the race in 55.54.

Perth City’s Stephen Milne put his freestyle prowess on display, taking the men’s 200m event in 1:49.44. He and 2nd placed Nick Grainger of Sheffield were the only 2 sub-1:50 swimmers in the race, with Grainger notching a runner-up mark of 1:49.50.

Also making a comeback of sorts is Aimee Willmott, who dropped out of the World Championships due to injury, but was here racing tonight in the women’s 200m IM. Her time of 2:16.31 fell just .03 shy of winner Renshaw, who edged the newly-minted Stirling athlete out in 2:16.28. Loughborough’s Abbie Wood was right behind in 2:16.68 to round out the podium.

Still amazing in season or tapered no matter who you are.

Peaty is also in the 200br today; If he can get anywhere around 2.12 after his 100 time, I’ll be mightily impressed and not at all ready to write him off as a sprinter. Because he is so fast, it catches you off guard, but Peaty typically drops a lot of time with a taper. With his physique, racing a decent 200br in heavy training must be difficult. Lets see how it goes; 2.16s in heats for both Peaty and Wilby (who is really one to watch over 200 today, 1.01.15 is not a million miles off his best, impressive in October for a swimmer who usually goes under the radar right up to trials).

Wait no world record? Is something wrong with him? Uh oh!