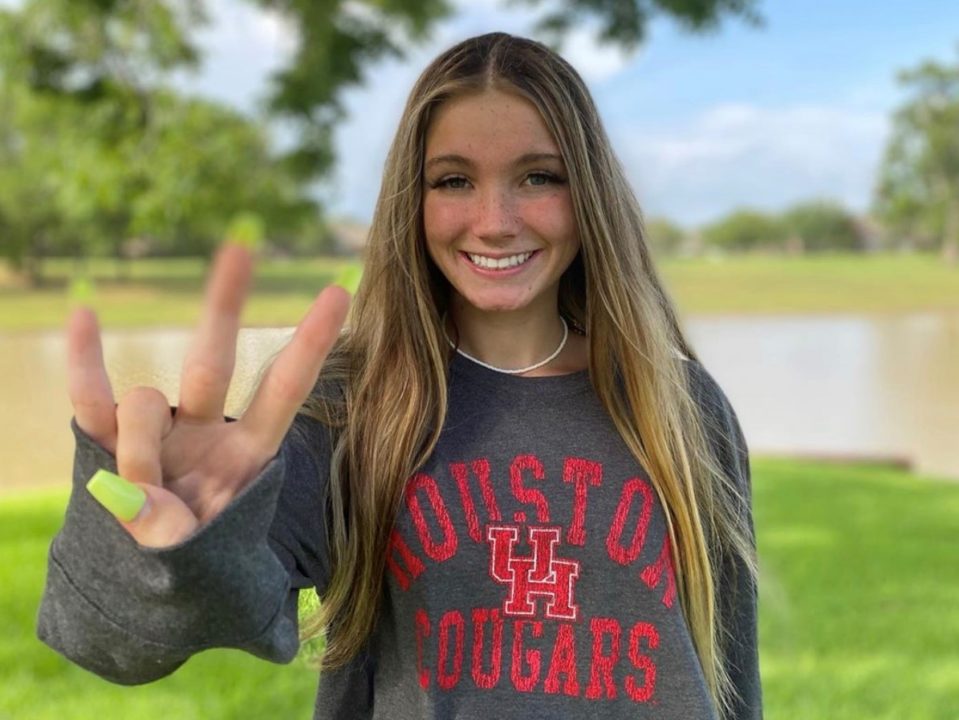 USA Swimming Scholastic All-American Keely Rollinson has verbally committed to swim for the University of Houston's class of 2025. Current photo via Keely Rollinson

Keely Rollinson of Sugar Land, TX announced her decision to remain in-state after verbally committing to swim at the University of Houston beginning in the fall of 2021. She is a member of First Colony Swim Team and she is a rising senior at George Ranch High School.

Under head coach Ryan Wochomurka, the school has begun to see more success in adding swimmers from the recruit-rich suburbs of the Houston. Rollinson will join another First Colony Swim Team alum Claudia Blowers on Houston’s roster. Blowers will be a rising junior when Rollinson arrives.

I am so blessed and excited to announce my verbal commitment to continue my swim and study at the University of Houston!! I would like to thank God, my coaches, teammates, and family for helping me get to this point! GO COOGS!!❤️

Rollinson competed at the 2020 6-6A Pearland Regional Meet in January, earning a pair of top 3 finishes. Her prelims 100 fly time of 56.20 made her the top seed going into finals. That evening, she went a 56.25, coming home with a 2nd place finish in the event. She touched 3rd during the prelims heats of the 200 free, and placed 3rd again in finals. She earned a personal best time in the event and qualified for the state meet a week later.

In February, Houston won its fourth consecutive American Athletic Conference Championship title, bringing home 17 gold medals, 6 silver, and 6 bronze. Houston’s top butterflier, 53.6 rising senior Katie Higgins, will graduate after the 2020-2021 season. Among those currently on the roster, only Chrysten Pacheco (55.3) had a faster time in the 100 fly than Rollison last season.

Rollinson’s top times would have placed her in the B-final of the 100 fly and the 100 free at the 2020 conference meet.