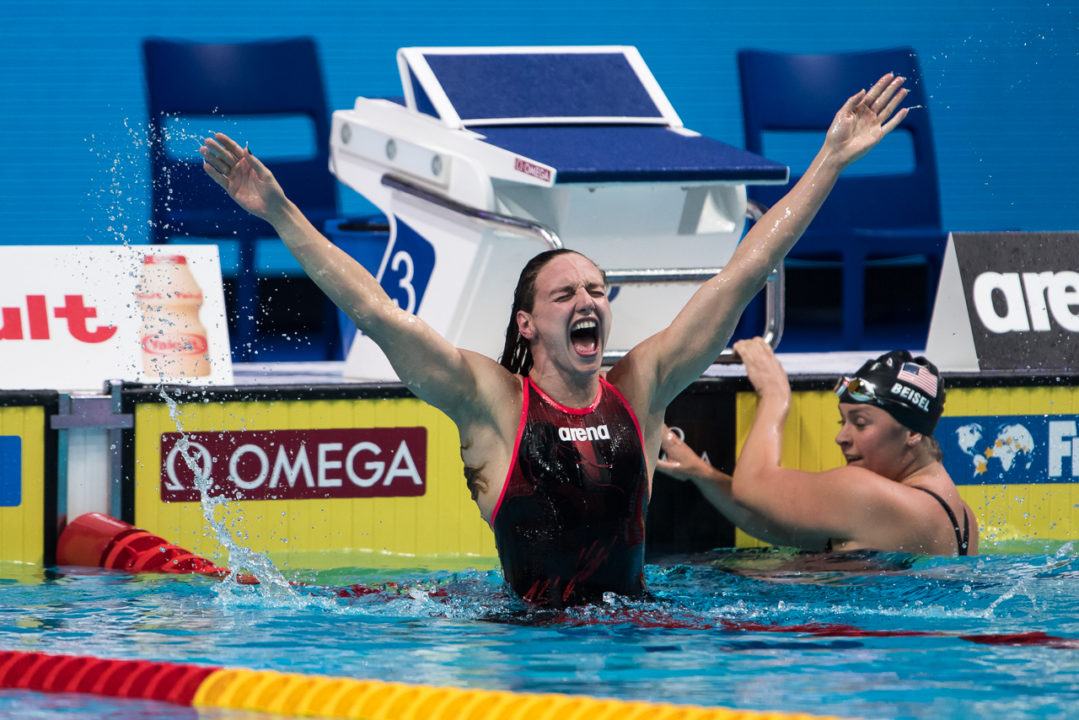 The only thing better than watching Katinka Hosszu destroy the field in the 400 IM final was listening to the crowd cheer her on. Current photo via Peter Sukenik/www.petersukenik.com

Hungary’s Katinka Hosszu became the first woman to win the 400-meter individual medley on her home turf on Sunday. She crushed the field and lowered her own Championship Record by nearly a full second with a 4:29.33 wire-to-wire win in front of an adoring public in Budapest. The home crowd had the opportunity to watch the fourth-fastest 400 IM in history, and they loved every second of it.

Katinka Hosszu won another gold tonight, posting a 4:29.33 for the 400 IM win. She adds that to her gold from the 200 IM final, and becomes the first woman to win a WC gold in her home country.

Mireia Belmonte of Spain picked up the silver, adding to her medal haul this week, with Canada’s Sydney Pickrem touching right behind the Spaniard for bronze, coming back strong after a rough 200 IM. Yui Ohashi did not have the 400 IM that we expected after her stellar 200 IM, her 4:34.50 in for 4th place.

Katinka you are so amazing may God give you strength to continue doing what you know best# go IRON LADY you are a star.

When this championships was spectacular in terms of strong competition and a rain of records (national, championships, continental, world) the W400IM event was the most unimpressive where every finalist with the only one exception was well behind personal best.

Is that you Craig?

Hosszu is an Iron Lady we I can happily admire and respect. Talk about elation!! The tale of Sydney Pickrem is initially amazing in that she stopped in the 200IM due to ‘choking on water’….hmmm…she showed strength and enervy to haul herself to a fantastic silver medal. Tactics talk time….? Whatever, apart from her name being worth a medal alone, she’s had a WC to fondly remember.

Why tf would she choke on water on purpose? She came back strong on the 400 im so kudos to her.

Too bad we cannot see it in Hungary….