46.72 Split Just One of Many Huge Swims from Dominik Kozma This Week 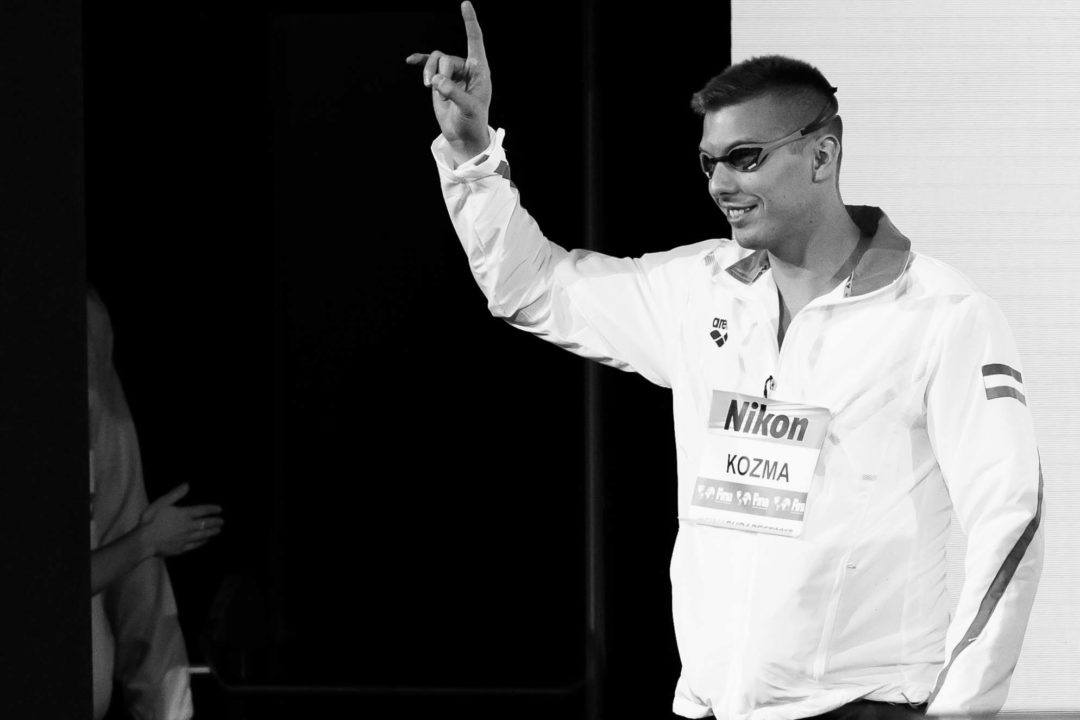 Kozma had a slew of great swims this week to do Hungary proud. Archive photo via Mike Lewis/Ola Vista Photography

All eyes were on the Hungarian swimmers this week at their home championships. Who was going to shine in Budapest? Certainly, the world expected the golden performances from Katinka Hosszu, and Laszlo Cseh‘s silver medal was no big surprise, either. But the Hungarian team proved they were more than just two swimmers deep, and perhaps no person excelled quite as much as Dominik Kozma this week.

Kozma, the son of professional football (soccer) player István Kozma, set national records left and right and provided heroic relay splits when he needed to over the course of these World Championships. He broke the 100 free Hungarian record two times (it would be three, but the most recent one doesn’t count since it was leading off the 4×100 mixed free relay, and mixed relay lead-offs don’t count for records), broke Cseh’s 200 free national record, and came up with two really incredible relay splits in the 4×200 free relay prelims and then tonight in the 4×100 free relay final.

Kozma was just one emerging talent from Hungary that shone this weekend. His relay teammates on the bronze-winning 4×100 free relay (Nandor Nemeth, Richard Bohus, Peter Holoda) are on the younger side, with Nemeth being just 17 and Holoda 21. Bohus is 24, while Kozma himself is 26. Nemeth is part of the Hungarian youth movement with Kristof Milak, another 17-year-old with huge potential after breaking the WJR in the 100 fly this week to win the silver medal.

Doma (Kozma) was outstanding througout the whole week. BTW Ricsi (Bochus) swam 47.21 in the 4×100 (3rd in that race) for the bronze. Nándor had the NR with 48.64 from April. Kristóf swam 3 WJRs in arow. I’m looking for his time in 200 at Indianapolis, where he’s also the WJR holder. FINA would’ve introduced the 4×200 fly relay (Csek, Kenderesi, Milák, Biczó) instead of mixed ones 🙂

Wonder where he was till 26? Kozma already started to swim nice (~49 sec) times in 2014, but came his serious shoulder injury. There was a surgery and could not swim for long months. He was just able to recover from it and reach the previous level to qualify for Rio. So he could start building on it from the autumn of 2016. About 2 years lost.

Crazy that the lead off in a mixed relay can’t count.

Can someone explain why?

Because in the event where men race women, the men will have cleaner water than usual and the women will have men to draft off of

But if you time trial by yourself in an official capacity, or swim a meet where everyone is slower, it counts as long as it’s finally approved, so seems dumb to me

Dates back to Duel in the Pool (2006 I believe?). Mixed 4×100 FR was added as a fun off-event to increase the national competition element between USA and AUS.

Phelps led off for USA. Libby Trickett led off for Australia, and became the first woman to swim sub-53 in a 100 free.

FINA decided not to count the time as a WR, because she may have been able to draft behind MP’s 48-point. Thus, the precedent was set.

Doesn’t make sense for men’s records not to count leading off a mixed relay, but I guess they wanted to make it equal.

Hungarian men look solid for the future, breaststroke the one hole