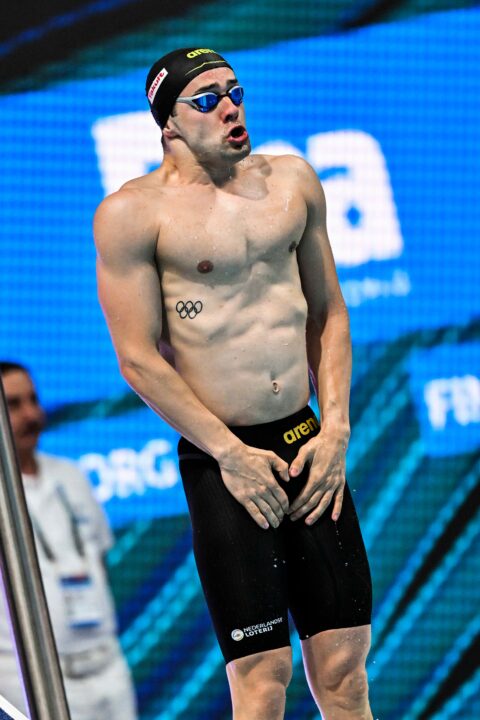 After having taken the bulk of the fall off due to dealing with a series of illnesses, Dutch breaststroking ace Arno Kamminga proved he is on the mend. Archive photo via Mattia D'Alberto LaPresse

Competing on day four of the 2022 Rotterdam Qualification Meet, 27-year-old Kamminga clocked a super quick 58.90 to take the gold in the men’s 100m breaststroke.

The next closest swimmer in the race was Caspar Corbeau, who also races for the University of Texas, with Corbeau hitting 1:00.09 for runner-up. Of note, 21-year-old Corbeau was quicker in the morning with a heats time of 59.90, the 5th fastest time of his career.

After taking two silver medals at the 2020 Olympic Games in Tokyo, Kamminga appeared primed to keep his hardware-reaping streak alive. Kamminga competed at both this year’s World Championships and the European Championships, however, due to illness, things did not go exactly according to plan.

In Budapest, the 26-year-old ace did snag the silver in the 100m breaststroke race, clocking a time of 58.62 to score runner-up status behind winner Nicolo Martinenghi of Italy. However, Kamminga wound up pulling out of the 200m breaststroke semi-finals at those World Championships due to illness.

The story was similar in Rome at the European Championships. Kamminga missed the podium in the 100m event, placing 7th in a time of 59.68. That result was nearly 2 seconds off of his lifetime best, a mark of 57.80 swum at the 2020 Olympic Games that made him the only man not named Adam Peaty to ever have delved into sub-58 second territory in the 1breast.

Kamminga then withdrew from the 200m breast in Rome as well, leaving the Dutchman to watch British swimmer James Wilby bag the gold.

With his sub-59-second outing tonight, Kamminga not only takes over the #1 spot in the season’s world rankings as the only 58-point swimmer. But, his result also qualifies him for Fukuoka 2023 and sets him up with momentum heading into this month’s FINA Short Course World Championships.

Off topic but when is SwimSwam starting Worlds preview?

Today, since the entry lists just came out :-).

Looks like a bunch of swims from short course meet, the 53rd Anniversario FENABA in Argentina, are getting logged at LCM swims in the rankings

according with FINA the 53th FENABA Anniversary is a LCM meet. https://www.fina.org/swimming/rankings?gender=M&distance=100&stroke=BREASTSTROKE&poolConfiguration=LCM&year=all&startDate=09%2F15%2F2022&endDate=12%2F05%2F2022&timesMode=BEST_TIMES&regionId=all&countryId=

Hi Giusy. It was a SCM event (qualifying for SC Worlds) Sres (fenaba.org.ar)

chad kamminga featured in photo grabbing his own Netherlands

So thankful for your comment because I was about to do one and this is way better than anything I could’ve come up with!