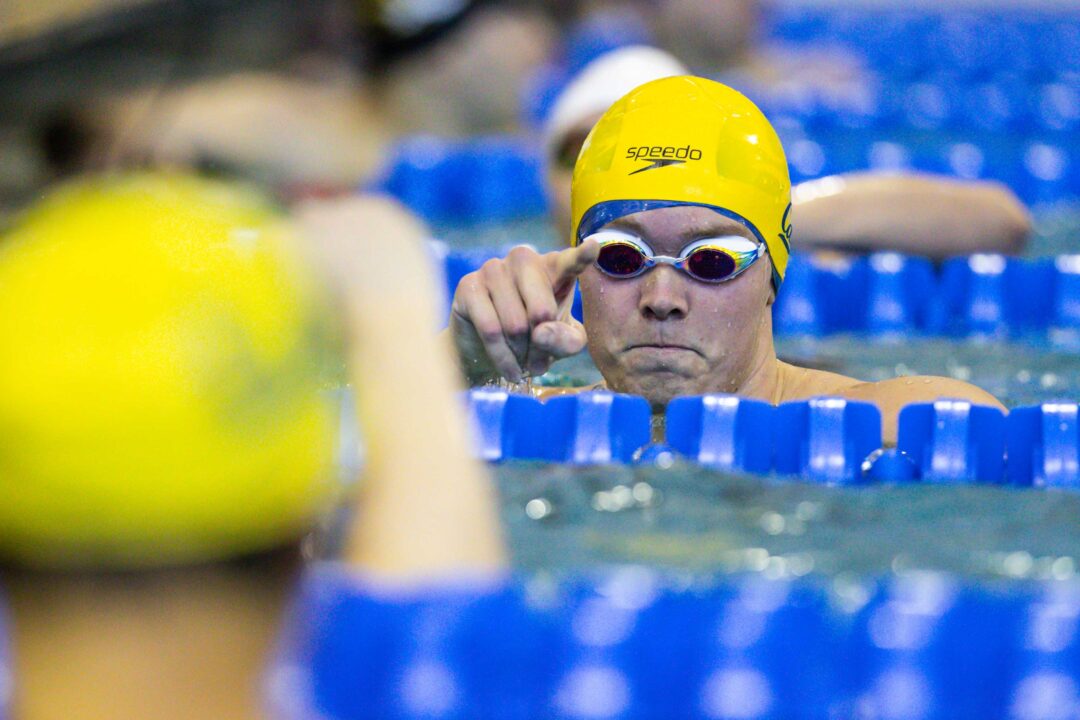 Julian has historically raced aggressively, taking races out fast, and holding on as best he can. It seems as though that may be changing. Stock photo via Jack Spitser/Spitser Photography

Despite missing out on qualifying for the Olympic Team in several events last year, Cal’s Trenton Julian had a great summer, swimming lifetime bests in 5 LCM events.  Julian has historically raced aggressively, taking races out fast, and holding on as best he can. That strategy has gotten Julian to very fast times, however, as was the case at the Olympic Trials last summer, it often yields to him getting run down on the final lap of a race.

We’ll see how Julian is able to back up the performance tonight, however, if he’s able to go another 1:54-low, regardless of how he gets there, it will likely be enough for him to qualify for the World Championships team.

Let’s take a moment to examine how Julian’s splits in the 200 fly this morning stack up against his previous 200 fly splits in his fastest performances.

As the splits show, not only was this Julian’s personal best performance, his final 50 splits was his fastest yet by nearly a second, and the margin between his 3rd and 4th 50 was significantly smaller than in previous swims. He also managed that without compromising his front end speed, splitting just 0.21 seconds slower on the first 100 than he did on his previous personal best swim from last summer.

Come on Teej…..all of us alums will send you good vibes through that last 50 tonight. Let’s get it!

I am puzzled on why Luca hasn’t improved from that time he did 3 years ago. He was 17 to 20 and usually this is when guys improve the most…. He has been going the wrong way!

Didn’t he have a shoulder injury?

Always knew this kid was a beast

Given how stagnant the men’s 200 fly has been behind Milak and Honda, this swim puts Julian in strong contention for bronze at worlds.

Probably why le Clos still swimming it, knows he can get a medal.

this the order I’m praying for