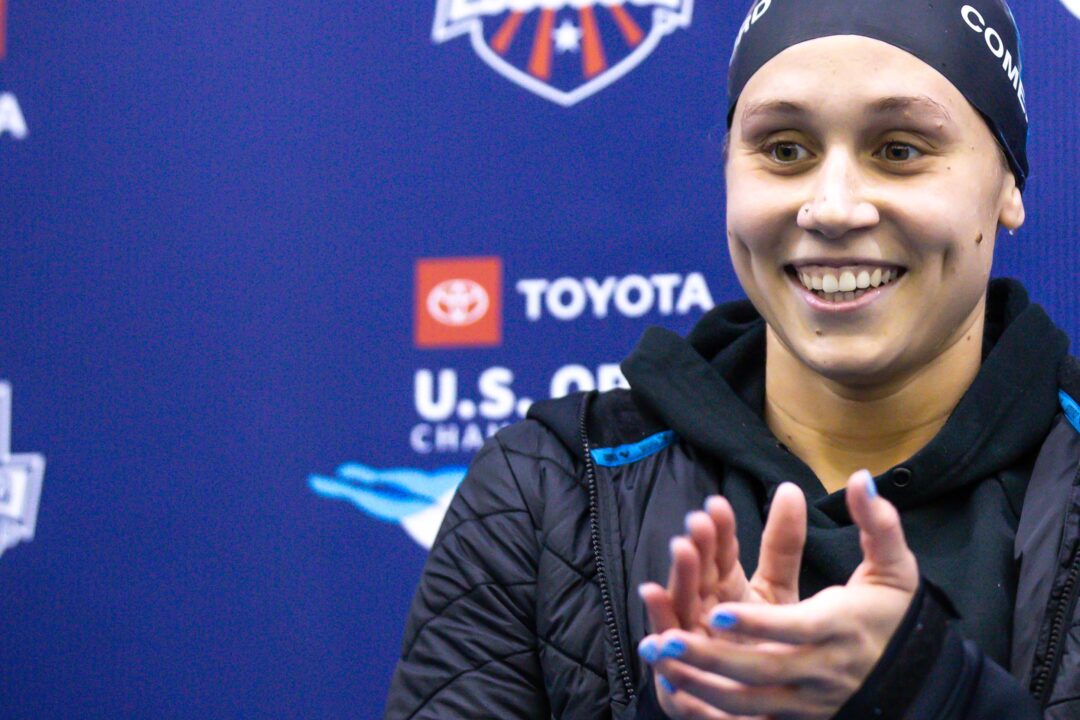 24-year old Mallory Comerford swam her fastest 100 free since before the pandemic on Tuesday morning, qualifying 4th through to the final. Archive photo via Jack Spitser/Spitser Photography

Former American Record holder in the 100 free Mallory Comerford qualified 4th into the finals of the same event on Tuesday to open up her 2022 US World Championship Team Trials in Greensboro, North Carolina.

Normally, a 24-year old former World Record holder qualifying for an A-Final would not be that newsworthy. In this case, though, Comerford’s 54.18 was a significant bounceback from what we’ve seen out of her over the last several years in this race.

Comerford went into the COVID-19 shutdown with a firey swim at the Des Moines Pro Swim Series in March – where so many famously swam fast in their last shot before the Olympics were called off.

When racing resumed after the pandemic, though, she was well off her paces. Comparing her racing since a post-Olympic Trials break, though, she’s well ahead of the curve she had going into Trials.

Comerford wasn’t out of the water for long during COVID-19: her boyfriend Clark Burckle manages swim, tennis, and fitness clubs in the Louisville area, so she had access to water more than most did in the early parts of the pandemic – but she seemed to have trouble finding her pacing when she got back in the water. After a couple of slow swims in November of 2020 and January of 2021, she went to a local invite in Nashville and was aggressive on the front-half, the way she needs to be when at her best, but suffered for it big-time on the back-half.

But on Tuesday morning, she was able to both push her front-half and her back-half, which is how she swims this race when she’s at her best.

A 54.18 isn’t the ‘game-changer’ that the U.S. needs for a Simone Manuel-less relay to challenge the Australians, and that weight is not on Comerford alone, but it is a big step in the right direction for her. At 24-years old, she’s still young enough to recapture her peak performance, which would be a massive leap for the American relay.

So happy to see this. Been following her since her breakout at NCAAs and she’s a fun one to watch. A great story of pushing through adversity if she can make the team tonight and shine at World’s.

Was just wondering the other day what the latest on her was. Ya love to see it!

This puts a smile on my face

Didnt she have mono as well I heard?

Comerford’s regress doesn’t look like she lost raw speed only or she was lack of speed endurance. The shape of her splits remain pretty similar. It’s more like her engine got less fuel. Today in the morning she had the fastest second half of the race than anybody else. Although everybody were pretty slow with that. She was the only one under 28sec.
Mallory may show under 54sec in final but will she be among top 6 finishers is hard to predict because the leading swimmers didn’t push themselves to the limits on the way home in prelim session. Weitzeil(28.21), Brown(28.32) and even Smoliga(28.41) can get ahead of her in final.
I really want to see her shining… Read more »

Pulling for her! She was awesome to watch for those couple of years.