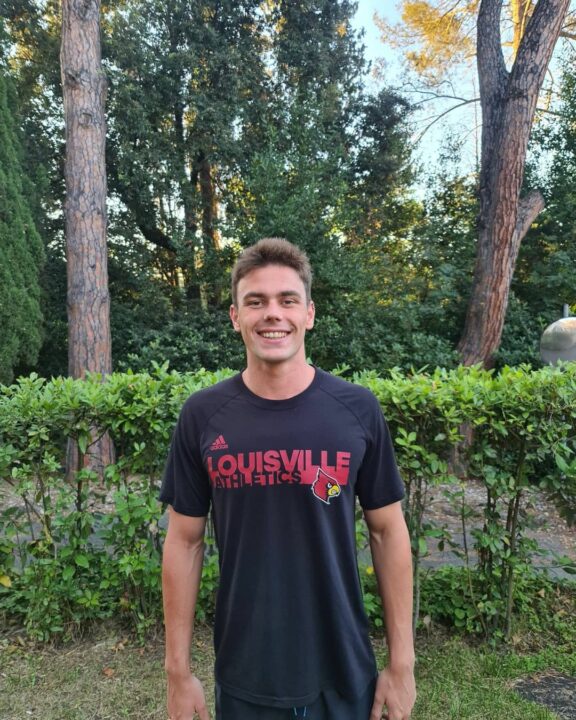 Denis Loktev, the Israeli Record holder in the men's 200 meter freestyle, will join the Louisville Cardinals for the spring 2020 semester. Current photo via Denis Loktev

I’m excited to announce that I plan to continue my academic and athletic career as a student-athlete at the University of Louisville! I want to thank everyone who has supported my journey to get to this point and I’m excited for the next chapter in my career. GO CARDS! 🔴⚫️
@uoflswim_dive

Loktev confirmed that he plans on joining the team sometime around the end of this December, which is a fairly common timeline for international recruits. Loktev is primarily a freestyler who seems to be best at the 100 and 200 distances, but his converted times suggest he could end up making an impact in either the 50 free or the 500 free.

Here’s a look at Loktev’s best times in long course and short course, with approximate yards conversions for each course as well.

Louisville doesn’t have any ranked domestic recruits coming in this fall that we know of, but Brazil’s Murilo Sartori, who split 1:46.09 on the second leg of Brazil’s 4×200 relay in the Olympic finals, committed for this fall, and he and Loktev could provide a big boost the Cardinals’ already-strong relays.

The Cardinals are returning all four legs of their NCAA 8th-place 800 free relay, but Loktev and Sartori could still find themselves on that relay, depending on how quickly they adapt to short course yards. He could also provide additional flexibility and depth on the 200 and 400 free relays.

Joao de Lucca won Louisville’s first NCAA title in swimming in the 200 free in 2013 and repeated a year later in 2014. He was, essentially, the swimmer who put the Cardinals on the proverbial NCAA map, and that’s the same specialty as Loktev.

Nah, Kibler/Carrozza/Larson/Foster is the favorite by a clear mile given the improvement curves of the four, but I could see them upsetting Cal.

Colton Paulson has been poppin’ off 1:32s inside relays since his freshman year, not to say that a bunch of others won’t improve and claim a spot. Cards are looking angry!

Albiero and his team will show him the way

2022 NCAAs going to be so deep, it seems like every day we keep hearing about a big name

i hear the lane lines in louisville are great for pulling

This is THAT guy?

Yes, if you click on his name in red at the top, the article comes up and you can double check yourself

Israeli swimmers have to complete mandatory military service before they can come over to swim. There are oodles of Israeli swimmers currently in the NCAA who had this path.

Hes 21 because all isrealis have a 2 and a half years of mandatory military service when they turn 18..

This guy probabaly had a long in swimming terms layoff

I thought he verbally commited to the lane rope