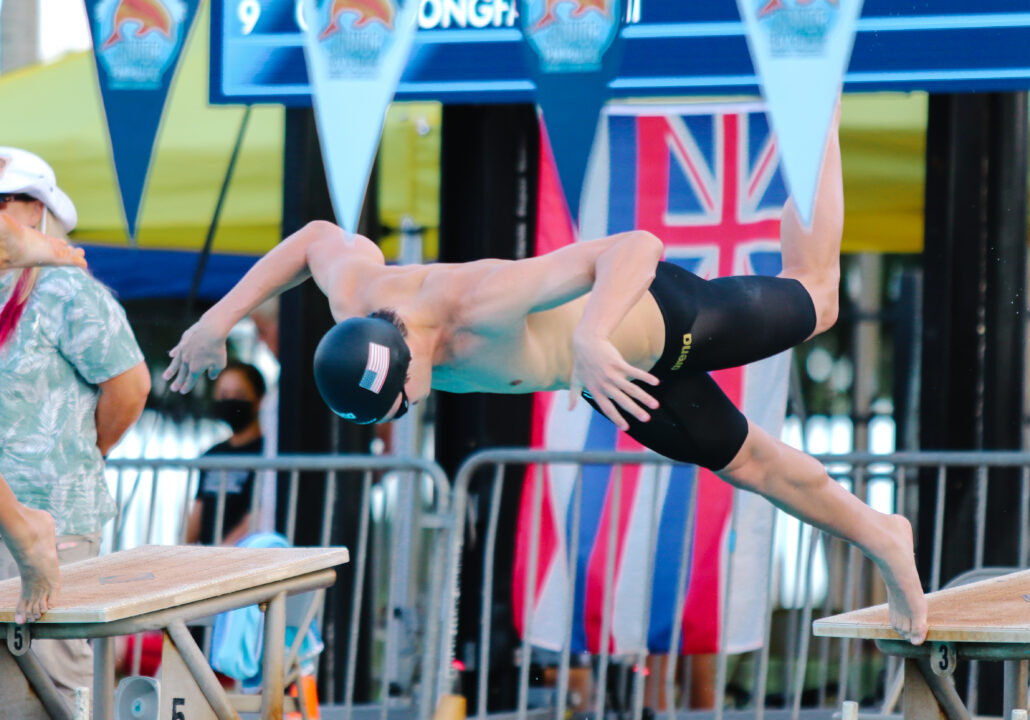 15-year-old Thomas Heilman swam particularly well for the U.S. in tonight's relay, speeding to a blistering 51.71 on the fly leg. Current photo via Jon Reiter

In the final event of the 2022 Junior Pan Pacs in Honolulu, the U.S. team of Daniel Diehl, Zhier Fan, Thomas Heilman, and Kaii Winkler broke the Championship Record in the boys 4×100 medley relay. It looked like the U.S. had the race in the bag, but Australia’s Flynn Southam chased Kaii Winkler down on the anchor leg, swimming an astonishing 47.87 to nearly give Australia the victory. Winkler was able to hold him off, however, and the U.S. added one more gold medal and another Championship Record to their tally for this meet.

The previous Junior Pan Pacs Record was held by Japan from the 2012 Championships. That Japanese team featured current IM star Daiya Seto on the fly leg. Here is a split comparison between the U.S. relay tonight and the previous record holding relay from 2012.

15-year-old Thomas Heilman swam particularly well for the U.S. in tonight’s relay, speeding to a blistering 51.71 on the fly leg. That comes in 1.5 seconds faster than Seto’s fly leg on the previous JPP Record relay from 2012. Heilman crushed the Junior Pan Pacs Record in the 100 fly last night, winning the event in 51.98. That swim also made Heilman the youngest American to ever break 52 seconds in the event.

100 back champion Daniel Diehl, who set a new Championship Record in the 100 back a few nights ago with a 53.27 and split 53.42 leading off the mixed 4×100 medley relay. Tonight, Diehl looked like he was having a spatial issue within his lane, as he was swerving to both sides of the lane on both laps in his lead-off tonight. Nonetheless, 54.24 was still plenty fast enough to give the U.S. a huge lead heading into the breaststroke leg.

Heilman is the new Andrew

Bro has nothing in common with andrew, his worst free event is the 50, he swims a phenomenal 200 fly and he can’t swim IM as MA does

I mean a new teenage phenom

Bro has nothing in common with Andrew, his worst free event is the 50, he swims a phenomenal 200 fly and he can’t swim IM like MA does

MA swam a US Open Cut in the 200 Fly LCM when he was 15 That time would have placed 13th at this meet. Feel free to tell how well you would do at this meet in one of your off events.

Wrong, because his breaststroke sucks and he has no sprinting ability. His 400 IM time from this year (4:32.45) is also 3+ seconds slower than what Summer McIntosh went at CWs.

That was a lot closer than expected!

Monster :47.8 anchor leg by Flynn Southam made it very close. And Diehl had some severe lane line issues and added a full second from his indv. swim; Fan was about 0.7 slower than his indv. swim; Winkler was not as fast as his split in the free relay.

Diehl must learn to swim

Swimming backstroke outside at night isn’t easy. He could possibly go 52 at an indoor pool

Yes. But “indoor” at Trials is equivalent of outdoor. He’ll swim in a massive football stadium, with super high ceilings. So learning to swim outdoor is important for his development to challenge for that Olympic spot in 2024.

The “lane issues” on the last lap of his 200 back prelims swim were the most severe I have seen. He almost came to a complete stop. I think that spooked him enough to carry over into the relay. He probably can go sub-53 and sub-1:47 right now in ideal conditions. He has a lot of raw talent and I won’t be surprised if he eventually breaks a WR.

Outstanding job boys!!! Congrats on your victory and new record.