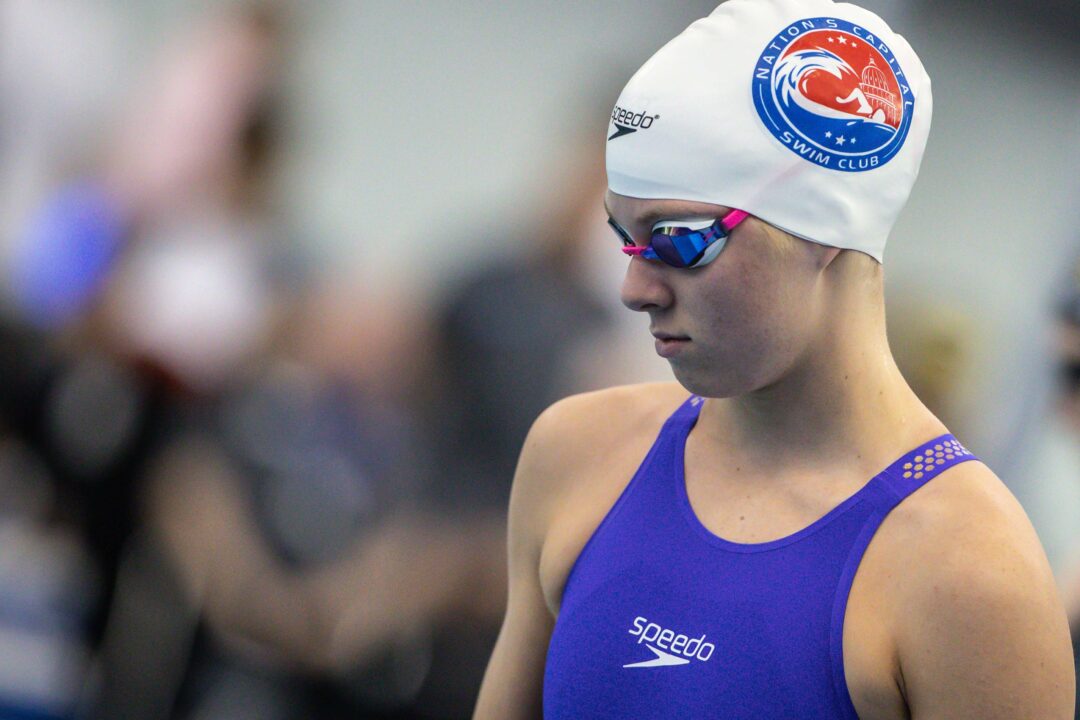 In this article, we review some of the top storylines from the girls' side of the 2022 Junior Pan Pacs meet starting tomorrow. Archive photo via Jack Spitser/Spitser Photography

The 2022 Junior Pan Pacific Championships are set to begin tomorrow, and we will be in for some matchups between the top junior swimmers from Australia, Canada, Cook Islands, Federated States of Micronesia, Fiji, Japan, New Zealand, Samoa, Singapore, and the United States. In this article, we review some of our top storylines from the girls’ side of the meet.

What Can Erin Gemmell Do?

17-year-old Erin Gemmell narrowly missed qualifying for the World Championships, finishing seventh in the 200 free at U.S. Trials with a time of 1:58.12. But what stung the most about this was that her prelims time of 1:57.93, plus the 1:57.41 she went a month before trials, both would have been fast enough to make the team.

Then, at U.S. Nationals this summer, Gemmell roared back to clock a 1:56.14 in the 200 free, a time that was fast enough to take bronze at the World Championships and only trails Katie Ledecky in the U.S. women’s rankings for the event. She wasn’t done with that though, as she went on to win the 400 free in a new best time of 4:06.17, which ranks her #8 all-time in the U.S. girls’ 17-18 age group.

Gemmell comes into Junior Pan Pacs, as the top seed in the 200 and 400 free by over two seconds, the 3rd seed in the 100 free, 5th seed in the 200 IM, and 11th seed in the 50 free. Competing in the big international meet of her summer, Gemmell has a chance to dominate the mid-distance free races, prove that her trials performance was just a fluke, and show that she’s truly fast enough to belong on senior international teams in the future.

Anna Moesch vs. The Aussies In Sprint Free

The battle between Moesch and the Aussie girls at Junior Pan Pacs somewhat mirrors the state of USA vs. Australia on a senior level in women’s sprinting. While Casey, Wunsch, and Jansen represent Australia’s ridiculous depth in sprint free and are expected to to carry on their country’s dominance in the discipline, Moesch is seen as growing young talent that could possibly develop into a 52-point sprinter that America desperately needs in order to catch up to the Aussies.

With so many swimmers sub-25 and sub-55 in the 50 and 100 free respectively, women’s sprint free at Junior Pan Pacs is going to be extremely competitive. The races in which Moesch, Casey, Wunsch, and Jansen face off in could potentially be a foreshadowing of the racing between the USA and Australia to come in future World Championship and Olympic meets down the road.

Mio Narita: The Future Of IMs?

In March 2022, Mio Narita took down the 400 IM world junior record in a time of 4:36.71 at the age of 15. However, despite finishing second at trials, she wasn’t able to qualify for World Championships because third-place finisher Yui Ohashi had qualified by virtue of her Tokyo Olympic gold. Narita’s world junior record didn’t last very long either, as another 15-year-old with the name of Summer McIntosh ripped a 4:29.12 just a few days later (although McIntosh didn’t become the official World Junior Record holder until she won the 400 IM at World Championships).

Narita comes into Junior Pan Pacs as the top seed in both the 200 and 400 IM with times of 2:11.41 and 4:36.71 respectively. Being the heavy favorite in both events, this meet is an opportunity for her to become one of the top swimmers in the world in the IMs, which is already dominated by juniors such as McIntosh, Katie Grimes, and Leah Hayes.

In fact, Narita’s 400 IM time from trials would have placed fourth at the World Championships, so who knows what she could have gone had she qualified for the meet? Would she experience a huge drop like Grimes, who went 4:36.17 at U.S. trials and then swam a 4:32.67 at Worlds? We will have to see what Narita puts up at Junior Pan Pacs in order to answer all the “what ifs”.

Three female swimmers on the U.S. Junior Pan Pacs roster, Natalie Mannion, Kayla Wilson, and Kennedy Noble, are incoming college freshmen and will be starting their NCAA careers shortly after the meet is over. Mannion and Wilson will be headed to Stanford, and Noble will be going to NC State.

With classes for colleges already starting now, these three swimmers will be subject to an extremely quick turnaround from Junior Pan Pacs to the NCAA, which will be an interesting thing to watch unfold. In fact, this is a turnaround that many swimmers have seemed to avoid, such as Lydia Jacoby, who qualified for Junior Pan Pacs but chose not to go likely because she would headed to Texas around the same time as the meet (in fact, she actually moved in to Texas yesterday).

Who’s Going To Show Up For Canada?

Canada has had a history of developing world-class female swimmers at a very young age, with primal examples being Penny Oleksiak, Summer McIntosh, and Maggie MacNeil. In fact, MacNeil actually skipped senior Pan Pacs in 2018 to go to Junior Pan Pacs, and ended up becoming a senior World Champion a year later.

Right now, Canada’s top junior swimmer is obviously McIntosh, who is not eligible to compete at Junior Pan Pacs. However, there are several other Canadians to look out for at this meet. One of them is Regan Rathwell, who is the top seed in the 200 back and the third seed in the 100 back. Canadian backstroke is already extremely deep with the likes of Kylie Masse, Taylor Ruck and Ingrid Wilm, and Rathwell can only add to that.

Also be on the lookout for Ella Jansen, who didn’t qualify for Worlds but recently hit a best time of 4:40.17 in the 400 IM at Commonwealth Games. In fact, she’s extremely similar to McIntosh events-wise, being entered in the 200/400 IM, 100/200 fly, and 400 free at Junior Pan Pacs. Does this mean we going to see two young Canadian butterfly/IM/mid-distance free stars in the future?

A bit off topic, but any information why US, Canada and Australia does not send any swimmer to World Junior Championship?

Because it commenced a day after junior pan pacs

I see, but those swimmers who were not eligible for the pan pacs (McIntosh, Grimmes, Hayes …) could go for WJC

Gemmel had Covid right before Trials. I’m sure that impacted performance there.

Is the Jr Pan Pacs ineligibility after competing at Worlds permanent or just for the year? Like if a 14 year old swimmer competed at 2019 Worlds but not this year, would they be eligible for Jr Pan Pacs this year?

Besides Ella Jansen entering largely the same events as Summer McIntosh has been doing, coming from the same club, they would have grown up training together and competing against one another (with Ella being a year older).

Ella actually switched clubs in the year prior to covid. Prior to 2019 -2020
Season she swam In Burlington. So actually they only trained together half season before covid shutdowns. Then summer moved to the HPC.

I would NOT say Canada developed Taylor Ruck. She grew up in USA age group swimming.

Because she competed at world
Champs and swimmers could not compete in both.

she went to worlds

Not fair on the other swimmers.

Why is it not fair to the other swimmers?

Because it is a Junior Level Meet. Summer is a senior level swimmer despite her age,

That’s not the reason why she can’t compete.

Because she is too good.
Erin Gremell is the fastest 400 free with a 2 seconds break on the field. McIntosh is 8 seconds faster than Gremmell.

Do you also think it’s unfair that a great decision was made to include an extra year of age eligibility even though not technically junior swimmers and can not set JWR’s? These swimmers will also raise the level of competition and faster racing!

Australia doesn’t allow the extra year of eligibility when selecting its junior pan pacs team so is at a self-imposed disadvantage.