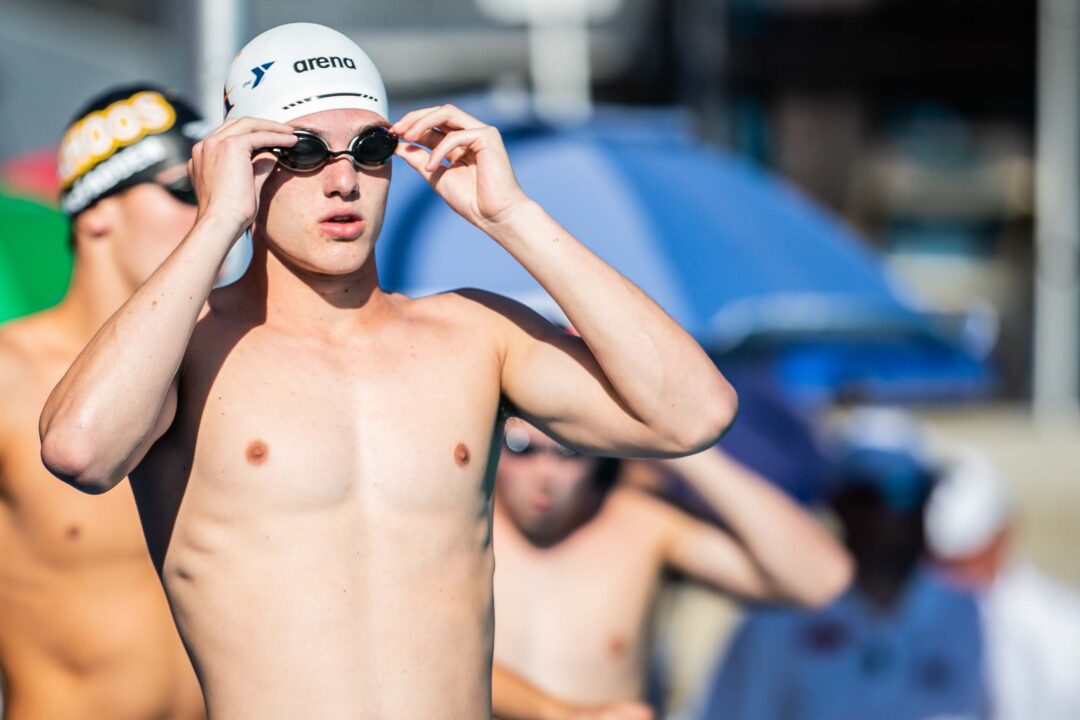 This post will be dedicated to highlighting 5 of the top storylines withing the boys events at these Championships. Stock photo via Jack Spitser/Spitser Photography

The 2022 Junior Pan Pacs are just around the corner, and with this edition of the Championships, we’ll see some of the best and brightest of the young talent among the 10 competing countries and territories. This post will be dedicated to highlighting 5 of the top storylines withing the boys events at these Championships. Unlike the girls events at this meet, there aren’t as many thrilling head-to-head battles to preview with the boys. However, that doesn’t mean there isn’t much to be excited about, as we’re without a doubt in for some phenomenal individual performances.

Does Flynn Southam Have More in the Tank this Summer?

Australian 17-year-old Flynn Southam will all but certainly be one of the stars of these Championships. The up-and-coming sprinter has emerged on the national level within Australian swimming and enters these Championships as the top seed in the boys 50 free, 100 free, and 200 free. Southam has arguably performed best in the 200 free this year, having swum 1:46-points on multiple occasions. First, Southam swam his lifetime best of 1:46.77 at the Australian Age Championships in April, marking a massive improvement for the then-16-year-old. He followed that up with a 1:46.82 at the senior Australian Championships in May, which was one of the performances which qualified Southam for Australia’s senior relays this summer. A few weeks ago at the Commonwealth Games, Southam helped Australia to victory in the men’s 4×200 free relay, splitting 1:46.08. In addition to the gold medal, Australia broke the Commonwealth Games Record with their performance.

Though he didn’t have a terribly busy schedule at the Commonwealth Games, Southam made the most of his first senior international meet experience. He led the Australian men’s 4×100 free relay off in 48.54, establishing a new lifetime best. Yet again, Australia cracked the Commonwealth Games Record in the relay in addition to winning the gold medal.

Southam is also the top seed in the boys 50 free, entering with his lifetime best of 22.39. It’s probably his weakest of his 3 events, although by a very slim margin. He’ll have a battle on his hands in that one almost certainly, as American Diggory Dillingham is entered just 0.09 seconds behind Southam. That being said, we’re still on record watch there, as the JPP Record stands at 22.20, a time which was set by Paul Powers at the 2014 edition of the Championships.

Southam gave an interview following Australian Champs in which he said that his focus for this summer was going to be Junior Pan Pacs, rather than the senior meets he qualified for. Given that, the alert level should be set to high, since we may just see even more lifetime bests from this rising star.

American 16-year-old Daniel Diehl put on a show at a Speedo Sectional meet in March, tearing to a new lifetime best of 53.59 in the 100 back. Not only was it a huge personal best for Diehl, he broke Ryan Murphy‘s 15-16 boys National Age Group Record with the performance. He’s been close to that performance on a couple of occasions since the Sectional in March, swimming a 53.86 at the U.S. International Team Trials in April, and clocked a 54.08 at a meet in May. At the YMCA LCM Nationals last month, Diehl swam a 54.74 in the event.

While Diehl didn’t have a great 100 back at Y Nationals in July, he had a fantastic 200 back. Diehl roared to victory in the event with a 1:57.62, taking 2 seconds off his previous best in the event. That swim lifted Diehl to #3 all-time in the 15-16 age group among Americans.

Like Southam, Diehl has entered this meet under the Championship Record in an event. The JPP Record in the boys 100 back is held by Jack Conger at 54.07, a record which has stood for 10 years.

16-year-old Nick Mahabir made headlines at the U.S. Summer Nationals last month, taking down a Singaporean Record in the men’s 100 breast at his young age. Mahabir represents Singapore internationally, but lives and trains in the U.S. at Coronado Swim Association in California.

At U.S. Nationals, Mahabir tore to a new lifetime best in the 100 breast, posting a head-turning 1:00.37. He backed up those swims the following week, swimming a 1:00.79 and 1:00.94 at the U.S. Junior Nationals. Mahabir also scared the Singaporean Record in the 200 breast at U.S. Nationals, swimming a huge new personal best of 2:12.07. Singapore’s Record stands at 2:11.93, a time which we very well could see Mahabir hit this week. As was the case in the 100 breast, Mahabir backed up his Nationals time at Junior Nationals, swimming a 2:12.54.

Mahabir is well off the Junior Pan Pacs Record in the 200 breast, but his 100 breast time is only half a second off the record mark of 59.85, which was set by Japan’s Akihiro Yamaguchi in 2012.

If you’ve been reading SwimSwam at all over the last year, you’ve no doubt seen Thomas Heilman‘s name in headlines. The 15-year-old American has broken a seemingly endless amount of U.S. National Age Group Records, and has an uncanny ability to drop time at virtually any meet, even if just by small fractions of a second.

One of the youngest boys entered in the meet, Heilman is the top seed in the boys 100 fly, coming in with his lifetime best of 52.44, a time which he swam at the beginning of this month at the U.S. Junior National Championships. In the 100 fly, Heilman comes in just off the JPP Record of 52.37 and does so at just 15 years of age. Given his track record of racing over the past year, it’s very reasonable to say Heilman could drop the 0.08 seconds to break that record, even though his best time was swum just a few weeks ago.

Will Japan Dominate the 400 IM?

Japan has been producing a ton of incredibly high level IMers in recent years. Of course, women’s IM star Yui Ohsahi comes to mind, as well as Daiya Seto, both of whom are among the fastest IMers on the planet. Ohasi won gold in both women’s IMs at the Tokyo 2020 Olympics last summer, while Seto has won 3 World titles in the men’s 400 IM.

Could this group be the next wave of elite Japanese 400 IMers? It’s definitely possible, as they’re not too far off times that would put them in contention to advance to finals at senior international competitions.

But what are the odds that another swimmer comes in and upsets this Japanese squad? Well, Lucas hasn’t yet hit his best time in the event this year. His 4:19.95 is from last summer, and he hasn’t yet gone under 4:21 this year. That’s not to say he couldn’t this week, just that he seems to have been on a plateau in the event this season.

American Maximus Williamson is an intriguing swimmer in the field, coming in as the #6 seed at 4:20.01. He went his lifetime best at the U.S. International Team Trials in April, then matched it in July at a Futures Championship, swimming a 4:20.41.

Does Diggory Dillingham swim for Hogwarts?

I have always assumed this. Somehow Duel in the Pool seemed very much like Quiddich as compared to regular swim meets….too bad this didn’t line up better!!

I just HAD to screenshot this. 🤣

Don’t forget Alec enyeart. About to go off

NB: USA SWIMMING STARTS AT 1 PM – BUT IS THAT EAST COAST? OR CENTRAL?

The young men you highlight here are all excellent choices and have demonstrated great talent. But, in the team vs. team competition, I can’t help but say that the American men’s squad is a considerable favorite to win. Their depth is just awesome and this is the LAST HURRAY before school — I expect super things from TEAM USA!

To me the storyline is how well these kids hold up after a long summer of swimming meet after meet. I expect half of them to just fizzle out cause they have to be exhausted. Okay prove me wrong I’m here for it..

I agree with you. Sending Heilman to Senior and Junior Nats was a bit much…and how did his parents afford to be in CA for 2 weeks straight and miss work, pay for hotels, meals etc…

Parents make impressive sacrifices for their kids. My neighbor took a 2nd mortgage out on their home so that their child could swim for the best club team in town.

Sorry, that’s pretty dumb. Put yourself in more debt for what? That’s the problem with society today.

Sometimes, a small club can surprise you! It’s amazing what our son has accomplished given our little town and club team…Tho he didn’t make.it to Pan Pacs, he’s done incredible things and he’s got a bright future ahead of him. We’re super blessed!

I think it’s all part of the debate of big fish/small pond vs. small fish/big pond. I would guess that ‘on average,’ there will be more success from small fish in big ponds at the club level, but for the right kid and with the right coach, the opposite is definitely possible.

Respectfully, although, we’re not in Thomas Heilman’s position (yet), we do know them a little and if we needed to, we’d move heaven and earth. I totally respect their choices and support for his swimming career. These moments? You can never get them back.

3
0
Reply
SwimMom Minding My Own
Reply to  James Beam

Respectfully…how someone’s parents can or cannot afford to be somewhere to support their child chase his dream is really none of your business. They also had another child swimming at Juniors.