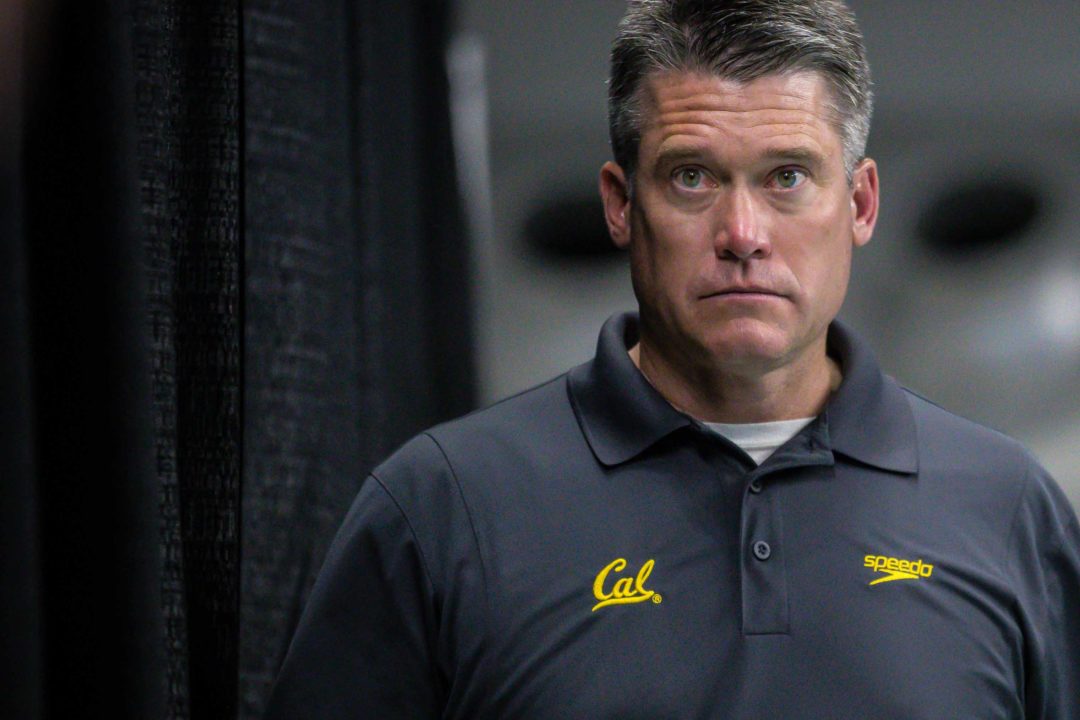 Durden spoke with SwimSwam about the situation in Berkeley and how it has evolved since McKeever has been off deck. Current photo via Jack Spitser/Spitser Photography

With Teri McKeever on administrative leave since May, the Cal women’s team will reportedly be coached by men’s head coach Dave Durden, merging the two programs for the time being.

“Dave Durden will be acting as the Director of Cal Swimming which allows him and his staff to work directly with both the women’s and men’s swimming and diving programs while the current coach is on leave,” Cal spokesman Dan Mogulof said. “When programs are combined, the NCAA permits an additional coach to be on staff to support both programs, and that is what we are doing.”

Durden spoke with SwimSwam about the situation in Berkeley and how it has evolved since McKeever has been off deck. He explains how the teams have trained together this summer and how the coaching staff from both the men’s and women’s teams have worked together to make their pool deck an ideal training spot for all athletes involved.

Looks like Izzy Ivey, Leah Polonksy, and Alicia Wilson are staying at Cal via their insta stories.

Let’s Go Bears!! Honestly a really great pick up for the women’s team, in an other wise really unfortunate few months. I feel like recruiting will probably soar – who wouldn’t want to swim for Durden and Marsh? Cheering for the ladies still at Cal, wishing you all wellness, a healthy and safe environment, and great success. That’s all that matters.

It is damaging Cal’s program to drag this on. It is really negative. They need to cut ties with the problem ASAP. Every post is a reminder of how bad this was for swimmers at Cal and how bad Cal is at handing their problems. Now Durden is being sucked in.

“Durden spoke with SwimSwam about the situation in Berkeley and how it has evolved since McKeever has been off deck”
did he? I mean, about that?

What a weird interview! He is this famous coach and he rambles on in a disjointed way that makes barely any sense. Is he that uncomfortable taking on these new responsibilities? Is that is normal way of talking? Maybe it is an unfair comparison but I think Eddie Reese would have been a lot clearer as to where he stood and wanted to do.

Its better than getting a statement prepared by some PR firm at least. The other thing is that the responsibility to have a good interview rests with person doing the interview. They should cut them off and help them give a more focused answer. This was like Dave Durden’s stream of consciousness for the last few months. It wasn’t that interesting cause he didn’t really have any coherent thoughts.

So we agree that it was not a very good interview.

Marsh was probably not around to tell him what to say.

IMO Dave is too young to take this approach to the world. He’ll get lots of congratulations from his peers 50+, but that’s not the audience. That’s not the athlete, that’s not the market, that’s not what makes his pros money. I never got this idea that older people have where it’s cool to intentionally not know things or how to do things.

Also, who’s going to tell him that Tweets are now 280 characters?

Going to be unpopular but, Eddie Reese is also 100 years old and speaks 3 words a minute

Yes, but those 3 words will be more valuable to our sport than every post you have ever, or will ever make.

Who wouldn’t want to swim for this man? What a leader. Good luck Cal!

Dave sure sounds like “That” executive on your corporate Zoom call.