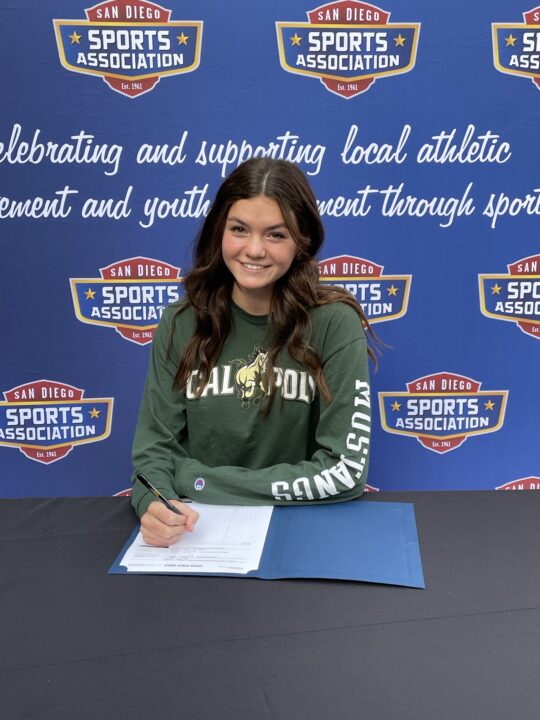 Brooke Dunphy from Carlsbad, CA has announced her commitment to swim for NCAAA Division I California Polytechnic State University for the fall of 2022.  Current photo via Brooke Dunphy

Brooke Dunphy from Carlsbad, CA has announced her commitment to swim for NCAAA Division I California Polytechnic State University (Cal Poly SLO) for the fall of 2022.

Dunphy recently graduated from La Costa Canyon High School in Carlsbad. At the club level, she competes for North Coast Aquatics out of San Diego, where she specializes in the middle distance freestyle events. At her most recent competition, the Western Zone Senior Championships in late July, Dunphy swam best times in the 50 freestyle LC (29.54) and the 200 freestyle LC (2:15.24), showing progress as she enters her freshman year.

When she arrives at Cal Poly SLO, Dunphy should immediately contribute to the team in both individual and relay events. Her best time in the 200 freestyle would have ranked 2nd on the team’s roster last season, giving her potential to be on the 800 freestyle relay on top of the individual event. In addition, Dunphy would have also held the second-fastest time on the roster in the 500 freestyle and the third-fastest time in the 1650 freestyle. Though the 1000 freestyle often is not contested at the NCAA Division I level, Dunphy would have ranked 2nd on the team in that event as well.

With her commitment, Dunphy is set to join Melia Costa, Kiersten Weiler, Jen Reiter, and Katie Treacy in Cal Poly SLO’s class of 2026.

I would love to coach her!