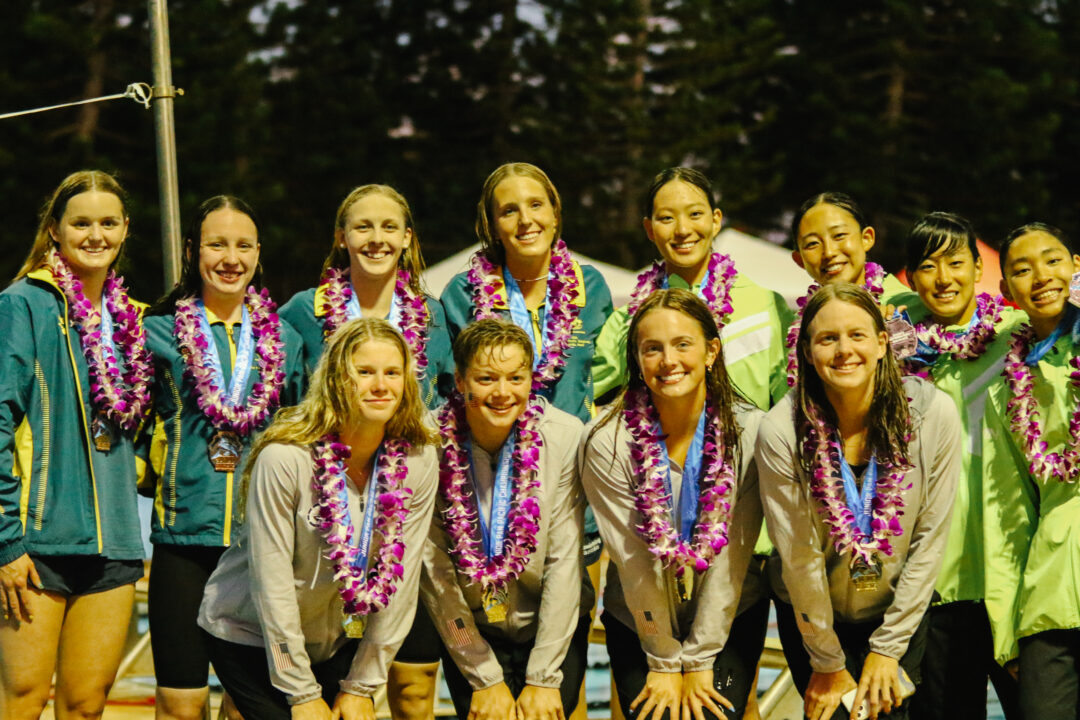 The United States closed out Day 4 of the 2022 Junior Pan Pacific Championships with four more gold medals, three silver medals, and four bronze medals. Maximus Williamson won the 200 IM with a meet record of 1:59.01, which also happened to be a National Age Group record for 15-16 boys in the United States. Michaela Mattes won the 1500 free (16:24.02), the last individual event for the girls. Both U.S. medley relays won gold with meet records. Maggie Wanezek, Piper Enge, Alex Shackell, and Erin Gemmell contributed to the girls’ victory. Daniel Diehl, Zhier Fan, Thomas Heilman, and Kaii Winkler earned the gold for the boys.

Japan had the next-biggest haul on Day 4, with three gold, six silver, and one bronze to leapfrog Australia in both the medal table and the team points table. Mio Narita won the girls’ 200 IM in 2:11.22, earning her second IM gold of the meet. Japan swept both gold and silver in both 200 breaststroke events. Kotomi Kato was the girls’ champion (2:26.55); Asahi Kawashima won the boys’ race (2:11.81).

Australia won both 50 freestyles. Milla Jansen, the runner-up in the 100 free, took home the gold in the girls’ 50 with 25.19. Flynn Southam completed his sweep of the sprint frees with 22.36. Likewise, Joshua Staples completed his set of gold medals in the distance events with a 7:56.29 win in the 800 free.

What happened to team Canada?

Summer Macintosh happened to Canada but I sense the problems go deeper,From the firing of Ben Titley,the timid reaction to covid, the lack of accountability on behalf of the ones in charge of Swim Canada etc..the swimmers did their best…the coaches etc…maybe not so much.When Canada couldn,t get relay times together for the psych sheets ,warning bells went off.When the girls medley B team beat the A team we realized they weren’t just warning bells.

Great job to all. Super happy with how Aus did considering the best female junior and second best male junior didn’t attend. Great meet for Flynn as well, excited to see where he goes from here!

I assume he’s referring to Mollie. She’s not a junior by FINA standards because she turned 18 this year but she would have been eligible for this if she didn’t go to worlds. Likely would have won the women 5 or so more golds

I didn’t mean best overall junior, I meant best Australian junior. It wasn’t a comparison to Summer at all.

However, if you did want to make a comparison, it would be interesting. Individually at worlds, Summer won two golds and a silver compared to Mollie’s one gold and one silver. If you include relays, then it’s 3 gold and 3 silver for Mollie vs 2 gold and 2 silver for Summer. Summer is younger so has more room for improvement. Summer has broken 4 WJRs (although only one is the actual fastest junior of all time) this year, while MOC broke 2 relay world records (one of which involved a fantastic leg by her, and one which was very… Read more »

Best Australian junior.I stand corrected and you’re right you can bend stats around in swimming to try to prove whatever you want.Both great young swimmers.