Gwangju Update: Backstroke Ledges Will Be At Uniform Setting For All 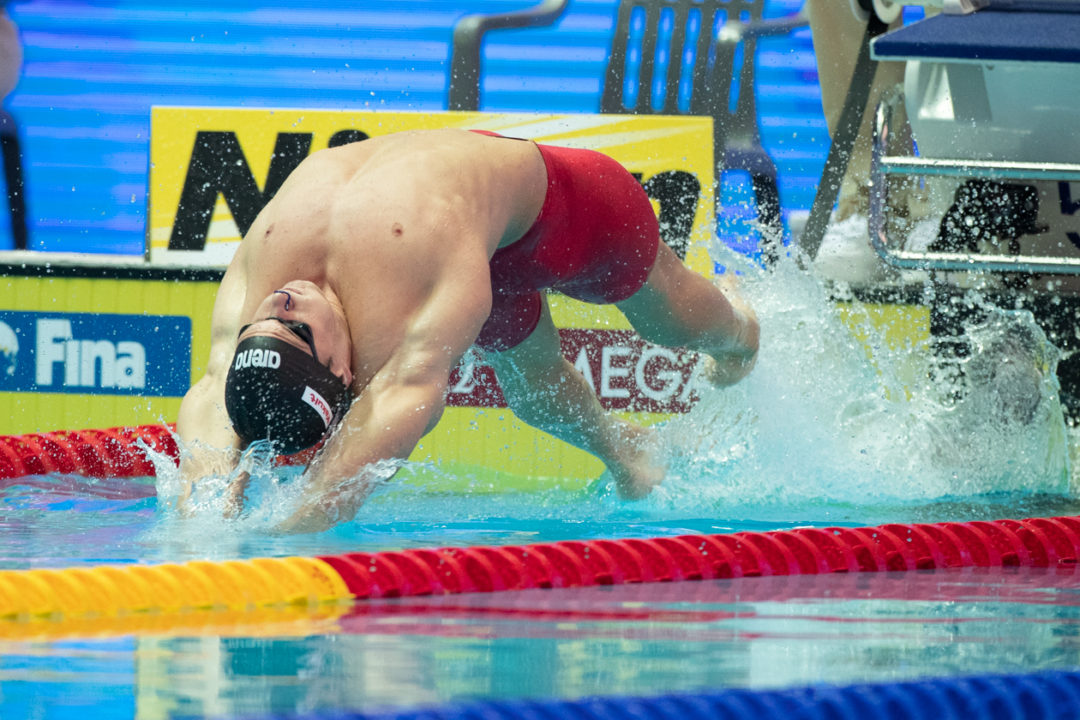 Due to major slippage issues on day 2 heats in Gwangju, the backstroke ledge will not be in use during tonight's semi-finals. Current photo via “Rafael/Domeyko Photography”

We saw a tumultuous day 2 prelims session where we saw several mishaps involving the backstroke ledges in both the women’s and men’s backstroke heats. Due to this, a decision has been made for the ledges not to be used during tonight’s semi-final action at the 2019 FINA World Aquatics Championships.

Update since publishing: Ledges will now be reinstated, but they will be fully extended to the same setting for all swimmers.

Per NBC announcer Rowdy Gaines‘ Twitter, issues will be avoided altogether by the ledges simply not being in use tonight. We will continue to update on if they will be reinstated for the finals.

Wow! No backstroke ledges will be allowed tonight at the World Championships! pic.twitter.com/TiTVTon9cH

As reported during the heats, several women’s races were delayed as the backstroke ledges needed to be tended to prior to the starting sequence. The situation worsened with the men’s heats, where we saw 2 swimmers awarded time trial swims due to starting misfires due to the ledges.

Simone Sabbioni of Italy and Dylan Carter of Trinidad and Tobago were each granted an individual time trial due to obvious, race-impacting slipping at the start, the latter of whom fired off a new National Record in his 2nd swim.

Ultimately, instead of displacing swimmers in the 15th and 16th slot that would have been booted out of the semi-finals due to Sabbioni’s and Carter’s individual swims, tonight’s men’s semi-final will see 18 swimmers in 2 heats of 9.

In terms of backstroke ledges and their impact on the race, swimmers typically benefit from better starting grip, body placement and push factor from using this relatively newer piece of equipment. You can read more about backstroke ledge’s early days here.

Below is a video released by FINA back in 2014, which explains how the backstroke ledge should work.

Even the non-back starts have looked a little sketchy, especially for the men’s sprint events. Seems to be a lot of flex in those starting blocks.

Phil Moriarty Yale swim coach was the first one to develop a backstroke in the water “starting block” but political forces
prevented him from being able to win FINA approval. It is mentioned in my book on Kiphuth.

Thank you for the insight Pete!

Sorry? are we at a local club meet or is this the WORLD CHAMPIONSHIPS? They have had all day to fix/replace/AmazonPrime a new set in for the finals. A complete disservice to the athletes who have practiced their starts to perfection. FINA, what an absolute sh*tshow.