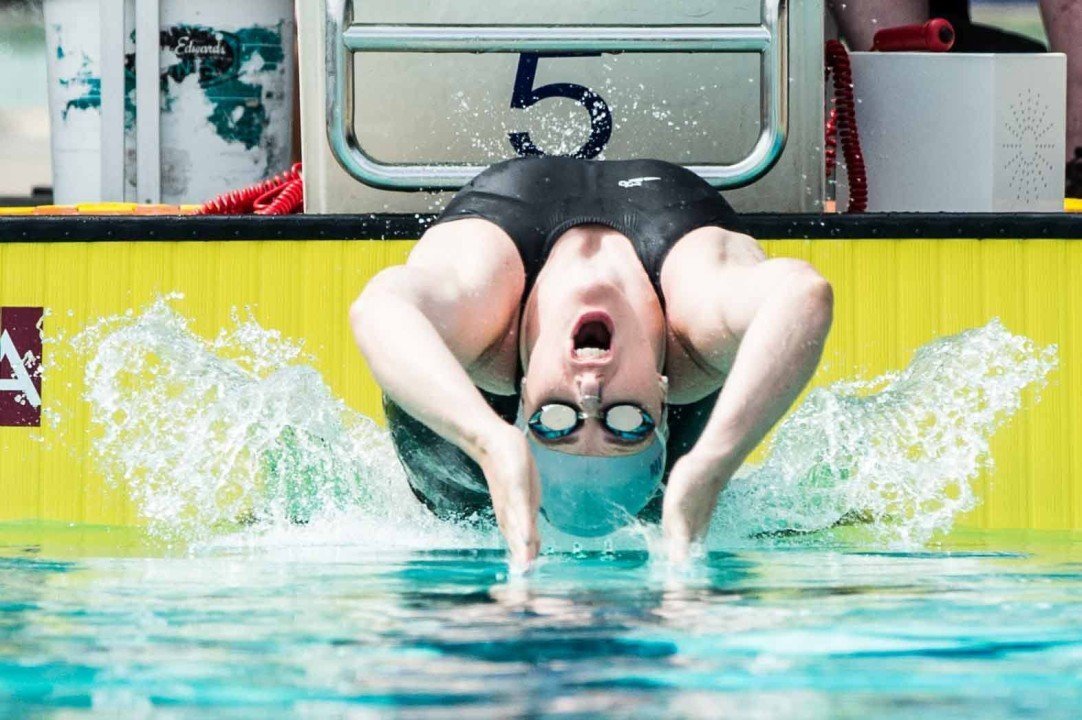 The impact of the new backstroke start wedges was immediately clear at Winter Nationals and SC Worlds.

Amanda Smith is a former SwimSwam reporter who is now the assistant coach at Florida Gulf Coast University. While her coaching duties have resulted in her stepping back from the news side of the business, with one of the best natural eyes for coaching we’ve ever met, she still contributes technique-driven articles from time-to-time.

The backstroke wedges came onto the scene at the grand prix circuit this past summer. Now that they are a bit more regularly used, we wanted to take the time to break down the usage and few swim data points to our best ability. Personally, I have taken film from short course worlds and winter nationals for this analysis.

First, just wanted to link you back to one of our first articles about the wedges. Gives you a little “Wedge 101” if you will.

As a former swimmer, who admittedly was not a backstroke specialist (mainly because of my start), and now a coach, I just wanted to share a few key points within the backstroke start that play in favor of the wedge.

Now let’s look at some video.

Florent Manaudou in the 50 backstroke had a nice hip distance (aka, foot-spread) on the ledge, which I totally agree with (I tell my athletes, do you squat jump better at feet hip distance or feet close together?). You seem him hold very steady in the start position and as the video changes to overhead, you see every single swimmer clear the water (like a rainbow) and everyone’s entry hole is about 5m, with their bodies out flat to the 7m, and just about no one did not break out before the 15m.

The video is very difficult to get splits on, but it looks as Manaudou’s head breaks the surface at 5.67 seconds at 15m.

For interest of comparison over distance, I took a look at the 200 backstroke film. Kawecki was easy to split out, since he was closest to the camera, and his breakout split, at the 15m, was 5.7. Obviously the 200 backstroke is a bit longer, and maybe you’d expect a bigger difference at the breakout (the stigma is that distance swimmers don’t have great starts, because it doesn’t matter or because they’re generally not as powerful overall). The power these swimmers are generating seems to be true in all distance of the backstrokes, at least, however.

The women’s 50 backstroke had an awesome image from above I could pause at, and as a coach, I have never seen a heat of women be able to clear the water that “clean”. The wedge gives so much sturdiness and power on the push, that swimmers hips can stay high from the moment of the beep.

Seebohm has the first camera angle, and her knees are about hip distance and in line with her shoulders as she places up for her start. The women’s entry hole is a bit short than the men, which I think anyone would expect, around 3.5m. And just like the men, the entire field brokeout between the 14-15m mark.

Seebohm was split at 6.04 when her head surfaced just shy of the 15m marker.

Race video of men’s 100 yard back final at Winter Nationals.

I started off with the men’s 100 backstroke. The video gives me a view from the side, and you can see most of the swimmers pull themselves almost all the way out of the water, and their hips push way up to clear the water. The entry distance is harder on this video, but you can see again the entire field, and definitely the middle lanes make it to 15m easily.

The winner Koga, was 5.5 to his breakout, about a head distance from the 15m mark.

Race video of women’s 200 yard back at Winter Nationals.

I only had good footage on the women’s 200 backstroke, and the women sit much lower in the water than the men had. Only lanes 3-5 cleared the water with their hips. It even looked like some of the athletes weren’t even using the wedges, as lanes 1-4 were all college swimmers (and this is not been approved for the NCAA). Lane five, Erin Voss, used the wedge for sure, and you can tell by how high her start position is plus, her hips height during the start.

For some comparison, I had Voss at 7.57 with the wedge at the 15m, and Snodgrass, who won the event and did not use a wedge was the exact same. Snodgrass went about an additional body length underwater than

I think the Short Course World footage is a bit more telling of the benefits to the wedge. When done right, I think it seems to equalize the start across the pool. These athletes really can rocket off the wedge, and have little to no water resistance as their hips are so high in the air as they enter the water.

I think it is key in backstroke starts in general to push your hips up, while also driving away from the wall. Most of the time this duel action is difficult for swimmers; it’s the “pat your head, rub your stomach” phenomena; it’s hard to do both at once. So you see a lot of athletes push the wall, but sink their hips, or vice versa. The wedge now gives athletes something physical to rest the balls of their feet on, giving them now an almost “give me” with the push element. Now athletes just need to get their hips up so their knee angle is at 90* or so to launch their feet free.

Personally, I think the wedges will showcase a lot more faster 50s, if that is at a split or finish. I also think it will definitely shake up the college field as well. There’s plenty of college swimmers who don’t have the strength or coordination of the professional swimmers in the world (yet). The wedge could take a backstroke swimmer who has a poor start, but has underwaters which are key in yards, and get them even with their competitors from the start.

And plus, I am sure plenty of universities and clubs across the nation and world, will begin to find creative and innovative ways to use the wedge. I just need you to put it on camera, please!

The second I saw Junta Kogan go 20.3 in a 50 back I knew these wedges would be making a big difference

Return to the stand-up backtroke start.

I was going to say something similar. Why not go back to letting backstrokers start with their feet in the gutters? It seems we’re looking for a solution to a problem that didn’t exist 20 years ago.

Jerime – fewer and fewer pools have usable gutters, and at meets like the Olympic Trials and the Olympics, there’s no gutter to put your toes on.

The general justification has to do with “inconsistency of pool design.”

Very interesting.
But I’m not sure I’ve well understood.
In summary, is this a good thing or not for someone like Missy Franklin who is a chronic bad starter on backstroke?

bobo – it appears as though they probably make everyone faster, and because of the forces of drag in play, I would guess that it would close the gapon some level between bad starters and good starters.

Bobo, my first thought when I read the title of this article was that the new blocks would be the most help to Missy. Braden, my second thought was that they would probably be more of an equalizing factor than anything else. My third thought: I wonder what Natalie Coughlin could do with them?! If she’s going to train for a 4×100 free relay spot in ’16, I sincerely wish she’d give the 100 back a try too. Let’s start a Swimswam campaign to encourage her! 😉

If Missy can translate power from a squat onto that wedge, assuming she is strong in the weight room, then the wedge will help her a ton. The wedge essentially takes away a big portion of swimmers dropping their ankles (which then drop their weight down and out of the balls of their feet) so they can focus on popping their hips as they push. Forcing the hips gets them into that “power 90” I called it, which leads to getting your hips up and over the water. But this is all in my opinion though!