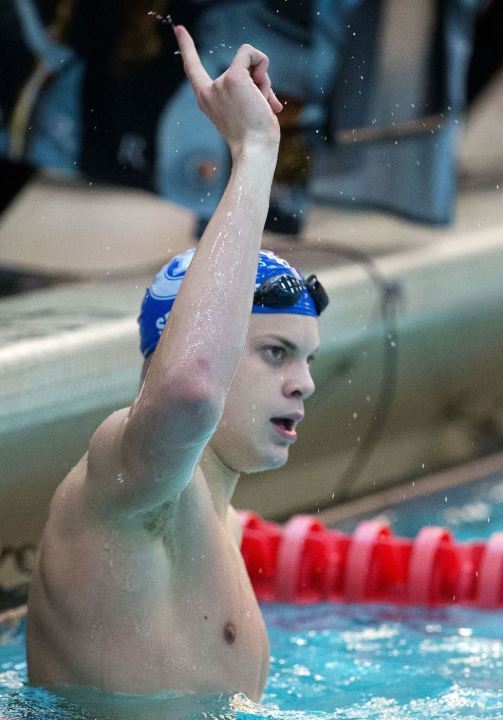 The Maroon & Gold Invite in Minneapolis, Minnesota, has become one of the best cross-state high school invites in the nation as of late, and the 2015 boys edition proved to be one of its most exciting installments.

Last year’s Maroon & Gold champs in the top-ranked “Gold” division (the meet features 4 different divisions, each with their own separate meet during the day) were Creighton Prep, also the defending Nebraska state champions. But this year, they ran up against Wisconsin’s Madison Memorial, the defending state champs in their own stomping grounds. On top of that, defending Minnesota state champs Wayzata were involved, as were the boys of Minnetonka, who look like the favorites to win that title this year.

In an outstanding battle, Creighton Prep nipped Madison Memorial by just half a point, coming from behind with a win in the final relay to defend their Maroon & Gold crown.

Creighton easily had the best top-level talent of the meet, winning all three relays and three individual races. But Memorial stuck around based on depth to nearly steal the title away.

Then his brother Sean, also a senior, rolled to a 100 free win. The Duke commit went 45.76 to smash a meet record previously held by former University of Minnesota All-American Curt Carlson.

Also under that meet record was East Ridge (MN)’s James Tidd, a future Minnesota Gopher. Tidd was 45.96. Sean Tate used that 100 free to avenge an earlier loss to Tidd in the 50 free. In that race, Tidd went 20.62 to break the meet record Sean Tate set last year. Tate was 20.96.

Madison Memorial got its biggest points from junior Justin Temprano, a double-individual winner. Temprano took the 200 IM with ease in 1:53.63, and actually increased his margin of victory in the 100 back, going 50.87 to win by nearly two and a half seconds.

The other double-individual winner was Minnetonka (MN)’s Sam Schilling, who swept the longer freestyle races. Schilling, a sophomore, was 1:42.27 to take the 200 free and also won the 500 free in 4:39.64. In the latter race, he had to come from behind to beat Anoka (MN) senior Matt Hedman, who finished in 4:39.93.

Creighton Prep won all three relays, but had to work hard for its first one. The 200 medley came down to a tenth of a second between Creighton and Madison Memorial, foreshadowing the great team battle to come. Caleb Piti, James Warren, Ryan Tate and Will Tjaden combined to go 1:35.53, while Memorial was 1:35.62. Temprano led off in 23.82 for Memorial, giving his team a lead, but Warren brought Creighton back into contention. Ryan Tate crushed a 22.38 on the fly leg, and though Memorial anchor Alex Peterson-Weber was 21.16, it wasn’t enough to run down Tjaden and Creighton.

The 200 free relay was another battle, with Creighton Prep’s Sean Tate joining Tjaden, Warren and Brandon Abboud to go 1:25.99. Tate was 21.10 leading off that relay, by far the best of the field, and Madison Memorial could only come up with a 1:26.49 for second place.

Memorial jumped back into the points lead over the backstroke and breaststroke events, though, leaving Creighton on the comeback trail in the 400 free relay. Creighton was finally able to pair the Tate brothers, though, and won the relay easily in 3:07.35. Sean Tate was 45.82 leading off, while Ryan went 46.35 on the next leg. Also on the squad were Jake Hedrick and Abboud, who split 46.65.

Madison Memorial fell all the way to 5th, losing ground to Minnesota powers Minnetonka (200/500 winner Schilling was 46.00), Eden Prarie (freshman Joshua Withers split 47.39) and East Ridge (Tidd led off in 45.69, the best of the field). That was enough to give Creighton the overall meet win by just half a point, as the team erased a 9.5-point Memorial lead in the final event.

You can find results of the Maroon, Bronze and Tiger divisions on the meet website here.

Pretty impressive win, the CP boys had a dual the night before with your Silverhawks. Drive up the next morning and back at it.

Yes excellent swims by Creighton Prep and some amazing top end speed. However, Madison Memorial was with out rest, also took a long bus ride that AM, and was not suited up like Creighton Prep. Very rare to see a public high school with so much talent and depth on one team like Madison Memorial. Great competition! Both teams will be better at the end of the season from this experience. Swimming Rocks!

Creighton Prep also swam without rest, and drove the 6 hours to Minneapolis that morning. I think that both teams swam very well and don’t appreciate negative excuses for their performances. Proud to see Nebraska and Wisconsin performing well on a national scale.

Glad to hear Omaha was not rested either should help with time drop and their performance at the end of the year. Will keep track to see what the Junior Blue Jays can accomplish. No excuses on performance simply an observation of choice of suits for meet.

Too bad both teams could not swim again at end of season would be another great meet for sure with some great times.

Good luck to Blue Jays in their quest for #9 in a row.
Memorial going for #5 in a row!