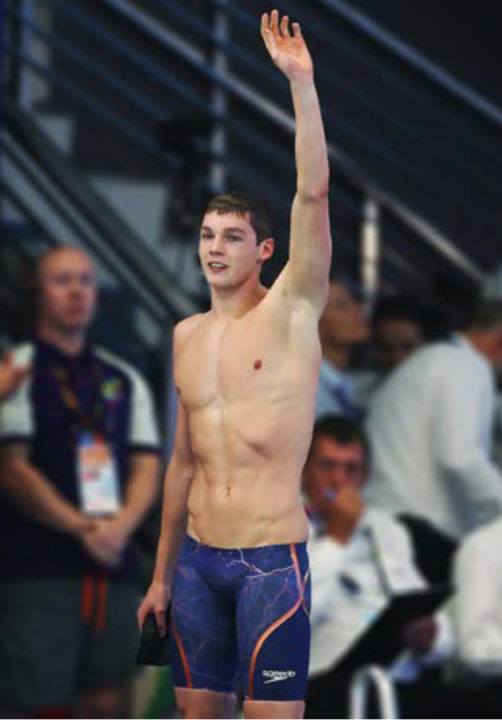 Duncan Scott, Scotland's star of the 2018 Commonwealth Games, has been named British National Lottery's Athlete of the Year. Archive photo via Team Speedo

Shortlisted along with 6 other athletes, Scotland’s Duncan Scott has been named ‘Athlete of the Year’ by Great Britain’s National Lottery. This is the first National Lottery Award of its kind, carrying a £5,000 cash prize to award to a National Lottery-funded project of the winner’s choice.

An original 120 nominees for the prize were narrowed down to 7, with Scott representing the only swimmer in the mix. The National Lottery Athlete of the Year Award celebrates the remarkable achievements of the UK’s world class National Lottery funded athletes, while demonstrating the impact National Lottery players have on elite sport.

“It is a real honour to be crowned ‘Athlete of the Year’ at this year’s National Lottery Awards. Without the support of National Lottery funding, I would never have achieved this much in the pool so it is amazing to be recognized in this way,” Scott said upon accepting the award at a ceremony this weekend.

“It was a dream to represent Team Scotland on the Gold Coast this year – I went there with no expectations other than to race as hard as I could. I never thought I’d walk away with six medals! Thank you to National Lottery players who helped to make this happen.”

At this year’s Commonwealth Games, Scott became the winningest Scot of all-time at a single Games, highlighted by an individual gold in the stacked men’s 100m freestyle race. Before that, Scott had snagged two medals at the 2017 World Championships as a vital member of Britain’s gold medal-winning 4x200m freestyle and silver medal-winning 4x100m medley relays.

Scott’s charity of choice to which to donate the prize money is Edinburgh Limb Loss Association (ELLA). The organization supports lower limb amputees, by arranging social events, including swimming sessions.

British swimming Olympic champion Rebecca Adlington was on-hand to give out Scott’s award.

“I’m thrilled that Duncan has been recognised as National Lottery Athlete of the Year. He was my one to watch after Rio. We picked out who to keep your eye on and Duncan was mine,” said Adlington.

“There were quite a few stand-out performances at the Commonwealth Games but for me it was Duncan by an absolute mile. Even his interviews afterwards, you wanted to give him a hug and say ‘you’re amazing’. He is such a nice guy and the way he approached the race, you could tell his passion for the sport.”

“During my career I was incredibly grateful to receive National Lottery support which gave me access to world class coaches, physios, technical support, facilities, equipment and training. I’m so glad that the National Lottery continues to fund star athletes like Duncan! ”

A marvelous moment, a fine athlete, and a very worthy charity!