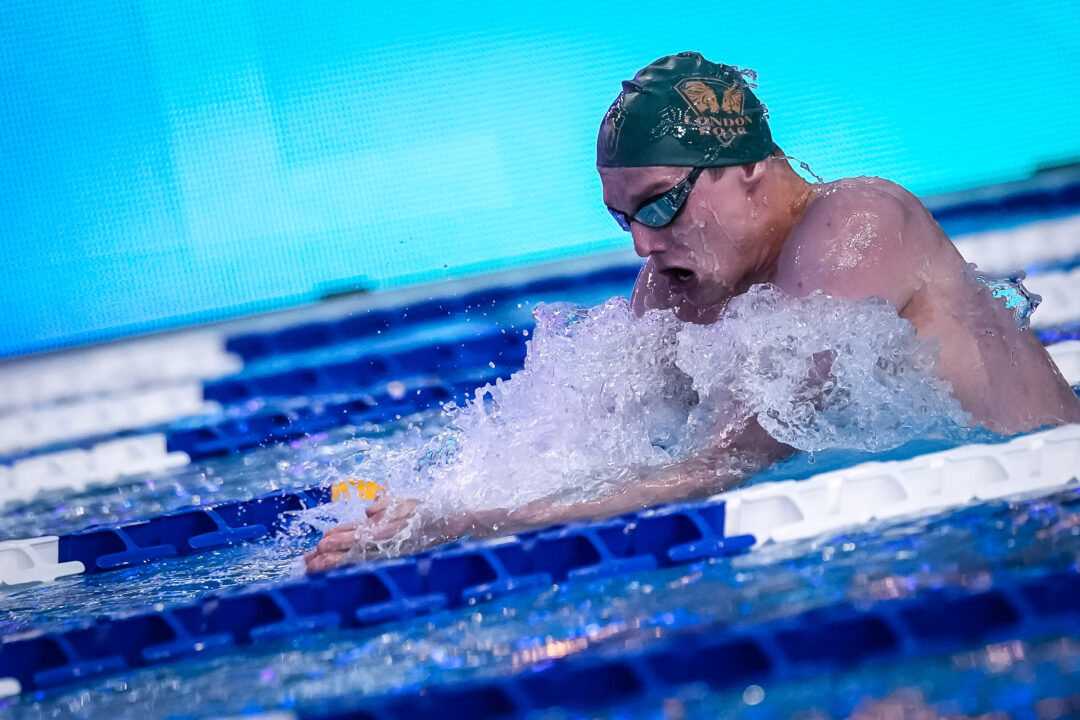 Duncan Scott added another British record to his resume with a 51.92 winning performance in the men's 100 IM on Day 2 of Match 6. Current photo via Mike Lewis/Ola Vista Photography

Duncan Scott of London Roar won the men’s 100 IM on Day 2 of the sixth match with 51.92, thus becoming the first British man in history to swim the event in less than 52 seconds.

Scott took down a nearly ten-year-old record that was set by James Goddard when he clocked a 52.05 at the Berlin World Cup in October 2011. Goddard placed second in that race to Michael Phelps (51.65) and beat Kenneth To (52.46) and Sergei Fesikov (52.59). Fesikov was the World Cup record-holder at the time with 50.95.

In Naples, Scott won his first ISL 100 IM, beating Thomas Ceccon of Aqua Centurions (52.12) and Vladimir Morozov of Tokyo Frog Kings (52.43), both of whom had a career victory under their belts coming into the race. Scott had a massive back half, coming from fifth at the halfway mark to first at the final wall. Ceccon and Morozov ran in second and third throughout the race.

Wait till he gets that 2free LC record back

Based on his split in the relay in Tokyo I think he’s certainly got a sub 1:44 in him. Also from interviews I think he’s used his narrow misses in the individual 200 free and IM at the olympics as powerful motivation, so he could be dangerous over this next three year cycle. I was worried it could have gone the other way and damped his enthusiasm and drive but glad to see it go the other way.

Also for isl I think in the grand final he dips under 1:40 and challenges for the textile record in the 200 free.

I hope so. I really have this feeling that at Paris he’s going to have his Emma Mckeon Tokyo 2020 moment where he finally pulls off a multiple gold winning performance after several minor medal performances at major championships.