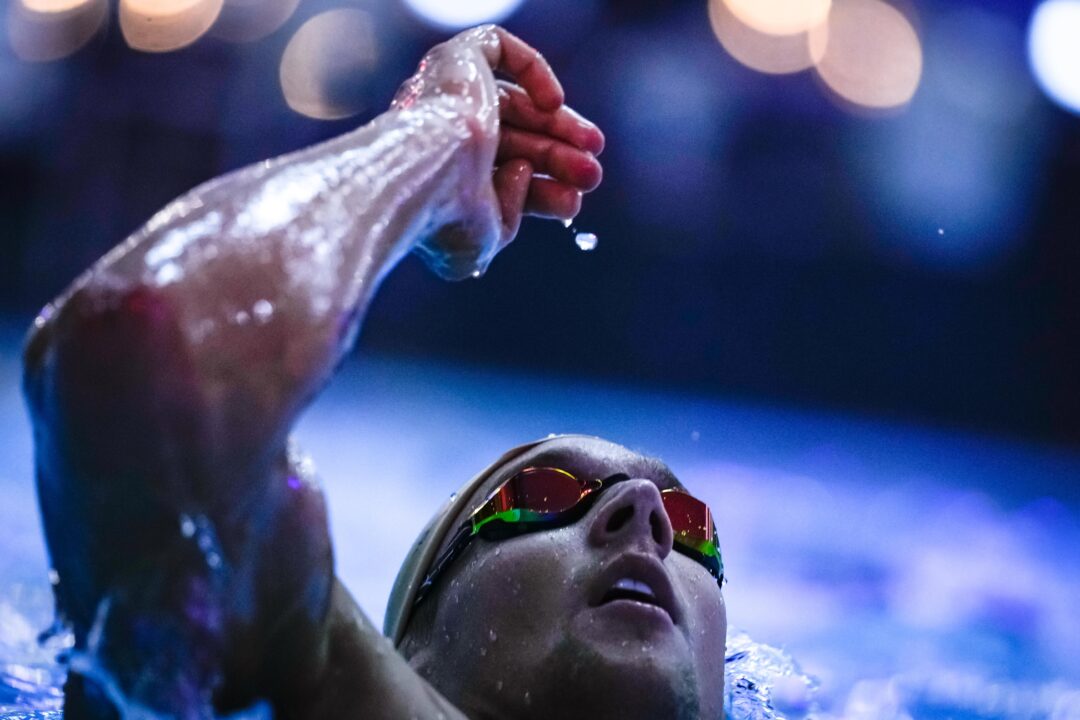 The Cali Condors have to be the favorite for this match, but the Tokyo Frog Kings and the London Roar are both strong in areas the Condors aren't. Current photo via Mike Lewis/Ola Vista Photography

The Cali Condors have to be the favorite for this match, but the Tokyo Frog Kings and the London Roar are both strong in areas the Condors aren’t, and it’s unlikely the ‘Dors will win by as wide of a margin as they have in either of their previous two matches (300 points and 150 points). Even so, the Condors are the team to beat this season as their roster is full of sprinters that can win or place top-3 in just about every stroke discipline. The 50s and 100s practically belong to the Condors, which means their relays are stacked as well.

London Roar will see a benefit with the return of Kyle Chalmers, Emma McKeon, and Freya Anderson. Chalmers, when paired with Duncan Scott on the relays, could foil the Condors’ Caeleb Dressel–Justin Ress duo. McKeon and Anderson, meanwhile, are a huge boost to London’s sprint and middle-distance efforts on the women’s side, respectively. The Aqua Centurions, meanwhile, look strong but haven’t put up many impressive numbers yet this season. The Tokyo Frog Kings have only appeared once in season 3, though they seem capable of making the semifinals and possibly even challenging Toronto and LA for a spot in the league final in January. At least, that’s how things look before Match 6 has begun.

The Cali Condors have a robust butterfly crew with Caeleb Dressel, Angel Martinez, Coleman Stewart, Kelsi Dahlia, Erika Brown, Katerine Savard, and Beata Nelson. Dahlia and Dressel swam some of the fastest times in history in Match 4 and have to be the favorites in the women’s and men’s 100 butterflys, respectively. The London Roar pretty effectively counters Cali with Emma McKeon, Vini Lanza, Teppei Morimoto, Marie Wattel, Ilaria Bianchi, Laura Lahtinen. Morimoto is a stronger 200 butterflyer than anyone Cali has on the men’s side, though he will face strong opposition from the Tokyo Frog Kings’ Daiya Seto in the 200 IM, should Seto swim that event. Tokyo also brings Leah Gingrich and Keanna MacInnes in the 200 butterfly, as well as Aly Tetzloff, Harriet Jones, and Takeshi Kawamoto in the sprints.

The Aqua Centurions have some strong sprint butterflyers but are a little weaker in the 200 fly. Their butterfly crew includes Alessia Polieri, Laura Taylor, Leonardo de Deus, Szebasztian Szabo, Matteo Rivolta, Holly Barratt, Silvia di Pietro, and Elena di Liddo. If the Aqua Centurions manage to win any butterfly event it is most likely to be Szabo in the men’s 50 butterfly… if he can get past Dressel. Aqua’s butterflyers are good enough to keep their medley relays competitive though.

The Cali Condors will face some intense competition from the London Roar in backstroke this weekend. The Roar brings in Minna Atherton and Kira Toussaint on the women’s side, arguably the best female backstroke duo in the league this season. The Condors, however, have Olivia Smoliga, Beata Nelson, and Sherridon Dressel. It would not be surprising to see the top-4 finishers in all 3 women’s backstroke events this weekend coming from either Roar or the Condors. On the men’s side, Coleman Stewart, Justin Ress, and Brodie Williams make for a solid men’s breaststroke crew, though they are probably a little overpowered by the Roar’s Guilherme Guido, Christian Diener, and Luke Greenbank. Even though Stewart is probably the best all-around backstroke swimmer out of the six of them, Ress and Williams don’t quite match Diener and Greenbank, especially in the 200- and 100-meter races.

The Tokyo Frog Kings have a decent men’s backstroke crew with Grigory Tarasevich and Richard Bohus, either of whom could shake things up in the men’s backstrokes. Tokyo will rely on Paige Madden, Aly Tetzloff, and Cassie Wild to get it done on the women’s side though. This is slightly problematic as Madden and Tetzloff are both better at freestyle and could be spread a little thin. The Aqua Centurions have Thomas Ceccon and Matteo Rivolta to get it done on the men’s side, though their women’s side faces a similar problem to Tokyo in that they rely on swimmers that specialize in other strokes such as Federica Pellegrini and Alessia Polieri. Aqua does have Holly Barratt who is primarily a backstroker, but their roster still lacks depth in this discipline.

The Cali Condors bring the most robust breaststroke squad to Match 6 with Lilly King, Emily Escobedo, Molly Hannis, Nic Fink, Kevin Cordes, and Oleg Kostin. They could get some pressure from the Aqua Centurions and Arno Kamminga, Fabio Scozzoli, Nicolo Martinenghi, Martina Carraro, and Arianna Castiglioni. Most likely, the Centurions will make a larger dent in the men’s breaststroke than the women’s. The London Roar is strong in women’s breaststroke with Annie Lazor, Alia Atkinson, and Jenna Laukkanen, but thinner on the men’s side, relying on Ross Murdoch and Sam Williamson. The Frog Kings could make some noise in breaststroke, but it is arguably their weakest discipline. Kanako Watanabe, Miranda Tucker, Yasuhiro Koseki, Alessandro Pinzuti, and if necessary, Daiya Seto, comprise Tokyo’s breaststroke roster. Strong all together, but strong enough to challenge the Condors or London?

The Cali Condors bring in an all-star sprint crew, including Caeleb Dressel, Justin Ress, Erika Brown, Olivia Smoliga, and Kelsi Dahlia. It is in the 200 and 400 freestyles, however, where the ‘Dors have problems. Khader Baqlah, Tom Peribonio, and Leoni Kullman, as well as Townley Haas, represent the Condors’ middle-distance crew, though they’ve had a rough go in season 3 thus far.

The London Roar sees the return of Kyle Chalmers who can swim the 50, 100, and 200 freestyles as fast as anyone else in the ISL. Meanwhile, Duncan Scott can fill in anywhere Chalmers is not, and Dylan Carter, Kenzo Simons, and Katsumi Nakamura make for a good sprint supplement. Zac Incerti and Edward Mildred round out the middle-distance crew. On the women’s side, Emma McKeon, Marie Wattel, Kim Busch, and Kira Toussaint make for a solid sprint contingent, while Freya Anderson, Laura Lahtinen and Katie Shanahan supply the middle-distance. In short, the London Roar has all their bases covered in the freestyle events.

The Tokyo Frog Kings have sprint prowess with Vladimir Morozov, Mallory Comerford, Aly Tetzloff, Julie Meynen, Gabby DeLoof, Bowe Becker, Pedro Spajari, and Ivan Girev. Tokyo has middle-distance depth to back up its sprinters with Paige Madden, Chihiro Igarashi, Nandor Nemeth, and Maarten Brzoskowski. Most likely, the Frog Kings will have a rough time in the sprints, but they’ll have an edge over Cali in middle-distance.

The Aqua Centurions have had some success in the relays, thanks to having clutch sprinters when it counts. Silvia di Pietro,  Alessandro Miressi, Thomas Ceccon, Laura Taylor, and Holly Barratt fill out the sprint block, while Federica Pellegrini can swim the 100 freestyle to the 200 backstroke to the 400 freestyle. Matteo Ciampi, Stefano Ballo, Mariia Kameneva, and Martina Caramignoli are the middle-distance specialists rounding out Aqua’s roster.

Caeleb Dressel, Beata Nelson, and Marcin Cieslak are a strong force for the Condors in the 100 IM, but the 200 and 400 IMs are thinner, falling back on Angel Martinez and Mark Szaranek. The Tokyo Frog Kings fill in these gaps well with Daiya Seto, Yui Ohashi, Leah Gingrich, and Daniil Pasynkov. They need to watch out for the London Roar though, who bring in Duncan Scott, Sydney Pickrem, Vini Lanza, Christian Diener, and Katie Shanahan. We can give Cali the edge in the 100 IMs, but the 200 and 400 IMs will be dominated by Tokyo and London, as well as the Aqua Centurions, who boast recent 1-2 400 IM finishers Ilya Borodin and Chase Kalisz. Borodin and Kalisz can also cover the 200 IM on the men’s side, meanwhile Thomas Ceccon is the Centurions’ best bet for points in the men’s 100 IM. Mariia Kameneva, Rika Omoto, and Fantine Lesaffre round out the Centurions’ roster for the women’s IMs.

The Cali Condor women are used to dominating the medley relays, but they should receive significant pressure from the London Roar this weekend. The Condor men are probably untouchable though in the medley relay. The freestyle relays will be a dogfight between Cali and London, and the Aqua Centurions could even be in the mix for a win in the men’s 4 x 100 freestyle relay. Still, the relays seem like Cali’s races to lose.

And I am still waiting for my money from season 2

Is it just you or it’s a universal delay to all?

Universal but no-one says anything

Alert: Dressel not doing 50fr tonight. Will swim 200IM instead. Getting interesting

wait where do you find the start lists?

I say he wins

Easily one of the most exciting matches thus far and CBS doesn’t want to broadcast it. Pathetic.

I think I would normally agree with you, but showing the Air Force/ Navy football game on the 20th anniversary of 9/11 is not pathetic.

Most exciting match this season so far! Just paid my $3 to subscribe

There’s a lot I want to say but all I’ll say for now is I have a feeling we’re about to see some top 5 swims of all time this weekend.