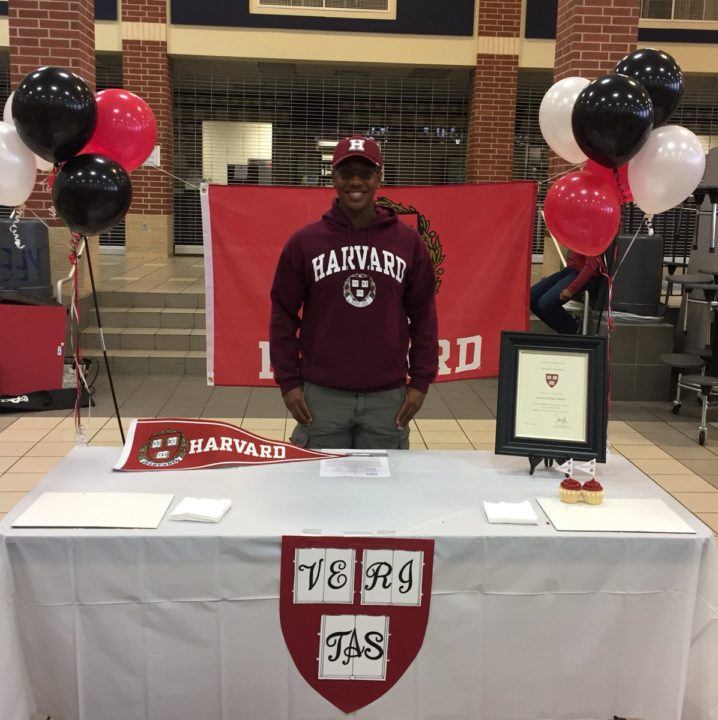 Braxton Marion from Cypress Fairbanks Swim Club and Cypress Ranch High School in Houston will swim for the Harvard Crimson in the fall. Current photo via @CyRanchSwimDive on Twitter

Braxton Marion, who hails from Houston, Texas, celebrated signing day in February at Cypress Ranch High School and was fêted by his school for his commitment to Harvard University’s class of 2022.*

Marion specializes in free, back, and fly, and swims year-round for Cypress Fairbanks Swim Club. He contributed runner-up performances in both the 100 fly and 100 back as the Cypress Ranch boys’ team won the District 17-6A Swimming and Diving Championships in January the CFISD Natatorium. He also led off the second-place medley relay (50 back PB of 24.75) and swam the third leg of the runner-up 400 free relay. He also improved his best times in the 100/200 free and 200 back during his senior year season.

*Technically, there is no “signing” per se for an Ivy League school. The conference does not belong to the National Letter of Intent program. Most athletes, however, apply during the Early period and receive their letters of admission in December, so they participate in their schools’ NLI ceremonies in the spring.