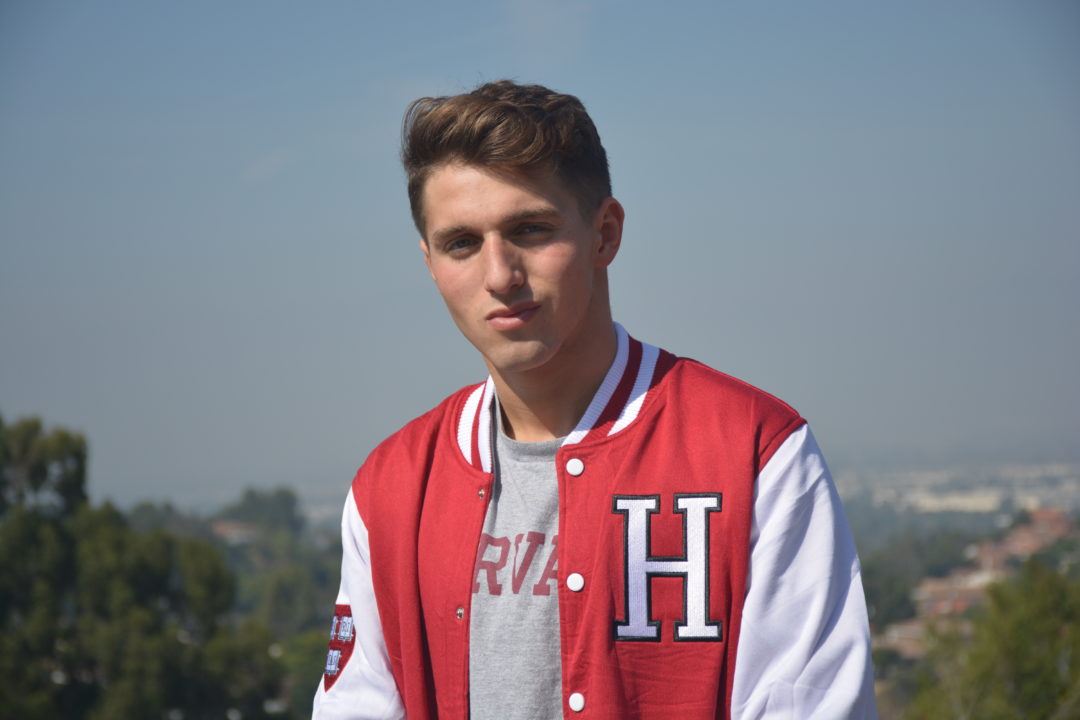 At the 2020 Patriot League Champs, Feld would’ve placed in A-finals in the 400 IM and 200 back, so she should be an immediate contributor to the program.

Carlson should immediately be an impact player for ECU, a team rebuilding after their temporary program cut led to a mass exodus of transfers last year.

Open water specialist Simon Lamar, a senior at Sonora High School in La Habra, California, has verbally committed to the application process at Harvard University*. Jake Johnson and Umitcan Gures have also indicated their verbal commitment to Harvard’s class of 2022.

“Proud to announce my verbal commitment to Harvard! Thank you to all those who have been a part of the journey. Can’t wait to contribute to HMSD! #veritas”

Lamar swam for his high school through League Championships but did not go on to CIF in May as he was preparing for Open Water Nationals the following week. The gamble paid off for him, as he qualified for World Championships in the 25km race.

Lamar represents FAST Swim Team out of Fullerton, California, where he excels at the longer range of the freestyle events. At the 2016 Winter Nationals he placed sixth in the 1650 free, 18th in the 400 IM and 29th in the 500 free. At last summer’s Junior Nationals, he was third in the 800 free, third in the 1500 free, and 10th in the 400 free. Lamar is even more impressive in open water. He won the bronze medal in the 7.5km race at 2016 FINA World Junior Open Water Swimming Championships in Hoorn, Netherlands, and placed sixth in the 2017 10km at U.S. Nationals in May, earning the title of Junior National Champion.

Lamar is a USA Swimming All-American. His top SCY times are:

Wow, Harvard’s been reeling in top 100 recruits the last few years. Definitely looking to be a top 15 program this year.

To the person who downvoted my comment, screw you.

its gonna be real tough for them to finish in the top 15 at NCAAs this year… i doubt theyll finish that high.

The first Dean Farris comment of the new season.

Imagine caring this much about a comment you made online

prof – you need to calm down

“has verbally committed to the application process at Harvard University*” The Admissions Committee may have a different view of things.

There are only 8 schools in the Ivy’s. They’ll make that top 15.

The only man to keep Schooling from the hype headlines.