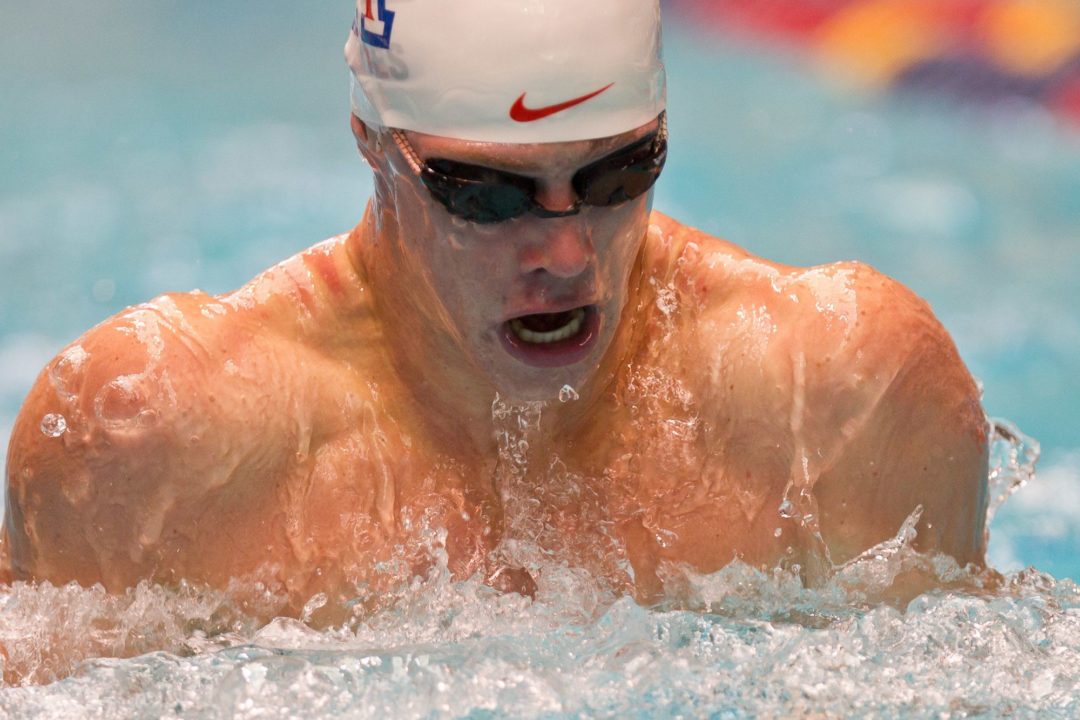 The whole lot of the Arizona Wildcats stepped up bigtime on day 2. It began with their 200 medley, and...

The whole lot of the Arizona Wildcats stepped up bigtime on day 2. It began with their 200 medley, and continued on to Giles Smith, who was really the big catalyst for the Wildcats on this day. They ended up with the top seed in 3 events, and a #2 seed in the 4th, and will hope to climb back into the battle in finals.

Meanwhile, Cal slowed down a tad (but only a tad) and still performed very well on what is expected to be their best day of the meet.

Much like in yesterday’s 400, the Arizona Wildcats took the top seed in prelims of the 200 medley relay in 24.23. That gives them a solid cushion headed into finals (thanks to again great middle legs – this time from Kelley Wyman (23.41) and Giles Smith (20.02). They’ve still got some room to drop here however. Nicholas Popov anchored the relay in 19.54, and either him, or another of the big group of Arizona sprinters, should be able to get down closer to a 19.2 at a bare minimm in finals.

If they do switch the order (perhaps Brown on the anchor), the Wildcats could chase Texas’ American Record of 1:23.97 in the finals.

But Cal, winner of both relays on Thursday, is lurking just a few tenths behind in 1:24.51. They too have a near-guarantee of improvement on at least one leg. That’s because Tom Shields split only a 20.26. That’s a tenth slower even than the first half of his 100 fly on yesterday’s 400 medley relay. Expect him to go under 20 seconds in finals. Shayne Fleming had an awesome anchor for them as well, with an 18.73. He’s built confidence and gotten better with each swim in this meet so far. It takes a 1:23-mid to win this relay tonight.

Stanford qualified 3rd in 1:24.62, including a fastest-split-in-the-field from freshman David Nolan in 21.22. He seems motivated after an average performance on day 1. As expected, they were hurt worst by the lack of a sprint breaststroker. Aaron Wayne’s anchor of 18.58 atoned for that somewhat, however.

Every team who finished the relay legally will earn an evening swim. Tennessee DQ’ed, with scratches from Georgia, Harvard, and Iowa. Many will point to North Carolina making this final with a 1:30.58 as the big flaw in the NCAA invite procedure, where so few relays are invited. In hindsight, those three teams that scratched will wish they hadn’t.

Arizona continued the momentum built off of Smith’s fly swim thanks to Austen Thompson’s 4:43.31 for the top seed in the men’s 400 IM. Right behind him though is Michigan’s Kyle Whitaker, who was last year’s runner-up, in 3:44.33. Both of those swimmers have been way faster this year. The two should be out way in front of the field tonight, though Whitaker is the one with history of getting better from prelims to finals (he dropped two seconds last year, Thompson added).

This final will have very much a midwest feel to it, with three Big Ten swimmers in the top 4. Behind whitaker was a big surprise from Indiana’s Sam Trahin in 3:44.49 and Michael Weiss from Wisconsin in 3:44.63. Weiss dropped time in the 500 on Thursday, so he may be the one capable of going even lower (he was about eight-tenths faster at Big Tens.

Cal got their requisite A-finalist, and a big freshman contribution, from Adam Hinshaw in 3:44.83. hat’s a big lifetime best for him. He was followed by two other freshman though in Drew Cosgarea of Stanford (3:44.93) and Eduardo Solaeche-Gomez (3:45.21).

That’s still an add for Solaeche-Gomez, but between him and a B-Final swim from Dan Wallace (3:46.15), the Gators looked better than they did day 1. The opposite is that Connor Signorin added 3.5 seconds to finish 17th and out of the evening, as did Carlos Omana.

Texas got one in the A with an 8th seed from Nick D’Innocenzo and one in the B with a 16th seed from Austin Surhoff. Surhoff went out very well in the race, but died badly on the last 200 yards.

Cal also got a second finalist, and a similarly huge drop, from Adam’s older brother Ben Hinshaw in 3:47.02.

Tom Shields cruised to a comfortable 45.58 top seed in the 100 fly, with Arizona’s Giles Smith rolling through with a 45.63. Despite the close times, Shields should still be the favorite in finals to win handily, but Giles will give him just enough to think about that it could badly disrupt Shield’s finals plan.

Jimmy Feigen provided a huge boost for Texas by making the A-Final in 5th in 46.21, tied with Florida’s Marcin Cieslak with a huge season-best. (Remember that at SEC’s, Cieslak swam the 200 free on day-3 instead of this 100 fly).

Texas put two in the final to match Cal with a 46.29 from Neil Caskey, showing how much of a boost he will provide by rejoining the Texas medley in the finals. Duke’s Bent Tuben took 8th in 46.35, which breaks his own school record by three-tenths.

Stanford’s Bobby Bollier has struggled mightly in this meet, and missed the final with a 46.94. Despite being a season-best time, a full second faster than he was at last year’s NCAA Championship.

Cal's Tom Shields knows he has a daunting task ahead of him, as this 100 fly was his 2nd of a projected 7 races on the day. (Photo Courtesy: ©Tim Binning/TheSwimPictures.com)

Texas’ Dax Hill, the favorite in this 200 free, looked every bit of that with a 1:33.43 in the prelims. He went out very hard and came back to the field on the last 100, especially Notre Dame’s Frank Dyer, who will be next door in lane 5 as the 2nd seed in 1:33.94. USC’s Dimitri Colupaev was 3rd in 1:34.12, just a hair ahead of Louisville’s Joao de Lucca, who had the fastest time in the country coming into this meet (Hill’s prelims swim cleared it by .01).

Texas got a huge second swimmer into the A-Final (badly needed) with freshman Clay Youngquist taking 8th in 1:34.44. There are three freshmen in the B-Final (Will Hamilton, Tyler Messerschmidt, and Cristian Quintero) but Youngquist was the only one in the A.

Texas got another scorer thanks to Kyle McNeilis’1:35.28 for the B. Cal could have had a 3rd swimmer in the B-Final, but Sam Metz and his 1:34.8 were DQ’ed for a false start.

And the freshman did it again – after breaking out mid-season with the fastest time we’ve ever seen from a freshman, Arizona’s Kevin Cordes swam a 51.32 in the prelims of the 100 breaststroke to take the top seed, a new Arizona record, a new freshman record, and a new American Record in the event. That took down the 51.35 done by former Northwestern swimmer Mike Alexandrov at the 2010 USA Swimming Winter Nationals (when he was a post-grad).

This swim by Cordes was, in fact, the 3rd-fastest 100 breaststroke in history, behind only two NCAA Championship-winning swims from Cal’s Damir Dugonjic in 2009 and 2011.

Louisville’s Carlos Almeida was 2nd in 51.85 ahead of a tight bunching that included Carl Mickelson (51.86) and Cal’s Martin Liivamagi (51.88). Liivamagi was the tops of a group of three Cal swimmers into the A-Final (Nolan Koon and Trevor Hoyt) to repeat what they did last year. They also tacked on a freshman Christian Higgins (better in the 200) in the B-Final in 53.15.

There’s a lot of good variety, and great experience, in the B-Final, with Princeton senior Jonathan Christensen 9th in 53.00; Penn senior Brendan McHugh in 10th in 53.03; Old Dmonion senior Arni Arnanson in 11th in 53.07; and Duke’s Piotr Safronczyk in 12th in 53.11. Safronczyk is listed as a freshman, but in reality he’s a 4th-year transfer from Division II.

A pair of top freshmen, Nic Fink and Richard Funk from Georgia and Michigan, just missed the final. Florida’s Matthew Elliott dropped time to go a 53.76, a good sign for the Gators. Michigan’s Bruno Ortiz was DQ’ed in prelims, and despite a lofty seed wouldn’t have finaled anyways.

Texas’ Cole Cragin took the top seed in the prelims of this 100 back, which is right where you’d expect him to be with how much of his race he swims underwater, in 45.95. Right behind him was Auburn junior Kyle Owens in 46.02 and Arizona’s Mitchell Friedemann in 46.05.

David Nolan (46.21) took the 4th seed in what ended up being a quite slow prelim. More than one of those swimmers was way faster leading off their 400 medley relays, so they should all dip easily under 46 seconds in the finals.

Taking advantage of the slow final (The cut line was half-a-second below last year) was Texas freshman Kip Darmody as the 5th seed in 46.28; he looked like the only swimmer who was max’ed out in this race, but it paid off with a guaranteed 11 points. Tom Shields of Cal, the defending champion, was 6th in 46.41 as he continued to wisely reserve energy through this morning swim. Mathias Gydesen didn’t pull of the A-Final double with Shields (both were in the 100 fly top-8), but he was 9th. Shields will instead be joined in the faste head by Marcin Tarczynski in 46.45.

Arizona did take a step back here, after many forward in this session, when Cory Chitwood slipped on the start. He was as fast as anybody on the last 75 yards, but his first 25 put him in a huge hole and he was only 20th in 47.34.

Arizona's Cory Chitwood grimmaces after slipping on his start in the 100 backstroke. He would miss the finals altogether. (©Tim Binnings/TheSwimPictures.com)

800 free relays are swum only as finals.

One of the big misses of the day to me is Dan Lester in the 100 fly. Even though he’s coming off Australian Trials (where he finished 7th), was hoping for a good swim out of him and a false start hurts.

Agreed. He was on a tough turnaround. He’ll have the 200 now to focus on.