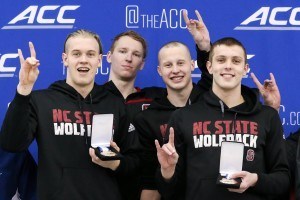 Since finishing 12th last season, NC State has improved their 200 medley relay tremendously. The Wolfpack put up a 1:23.19 at ACCs, to take the top seed heading into NCAAs. 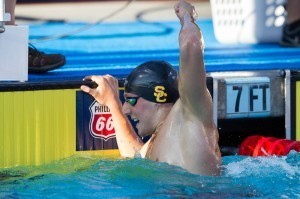 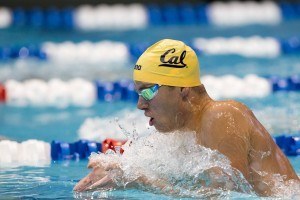 Cal Edges Out Stanford In Final Dual Of The Season

Josh Prenot had a pair of wins today, helping his Cal Golden Bears get by Stanford in their final dual meet of the season.

Tyler Messerschmidt
Tyler Messerschmidt is an NCAA All-American born to parents Eric and Allison Messerschmidt on September 11, 1992, in Phoenix, Ariz. He swam club for the Phoenix Swim Club and competed at the high school level at Desert Edge High School. He was a six-time state champion in Arizona, whose young career was highlighted by state records in the 100 and 200 yard freestyle, including the 100 freestyle record previously held by American freestyle legend Gary Hall, Jr.

Messerschmidt’s next big task was helping Cal to another NCAA title as a key sprint freestyler. The Golden Bears-Longhorns showdown started immediately, as Texas put down the top seed in the 200 free relay, the first swimming event of the meet, in prelims. Cal was the 2nd seed going into finals. Messerschmidt dropped two tenths from prelims to lead off in 19.23, and the Golden Bears would go on to grab their first relay victory of the meet. His 19.16 in prelims of the 50 free on the same day was a personal best, but it was just shy of pushing him into the A final. In the B final that night, he dropped down to 12th with a 19.33. The next day, Cal barely squeezed into the A final of the 200 medley relay, and an 8th place that night would not fare well in their tight duel with Texas, who had put up the fastest time that morning. Cal switched out butterflier Marcin Tarczynski and freestyler Shayne Fleming for Tony Cox and Messerschmidt, respectively. Cox and Messerschmidt each swam much faster than the original 3rd and 4th legs, and Messerschmidt’s 18.65 anchor helped Cal to another victory, coming back from 8th in prelims to take the maximum amount of points in one event. While he was unable to score in the 200 free (1:35.07), Messerschmidt did put up a solid time of 42.50 in the 100 free prelims. While this was a strong time for him, he sat only in 13th. That night, Cal took the lead from Texas after trailing after day two, and Messerschmidt felt the momentum shift. He dropped over two tenths in finals and pushed ahead the entire B final to move up to 9th and further solidify Cal’s new lead. Messerschmidt then led off Cal’s 400 free relay in a 42.64, not as fast as any of his individual 100 free swims, but it helped Cal to finish 2nd behind only Auburn in the event. After that race, Cal had overcome the Longhorns and won the NCAA title.

2014-2015
In his senior season Messerschmidt qualified for the NCAA Championships again, this time during each year of his NCAA eligibility. Messerschmidt first took on the 200-yard free relay, where he was placed as the leadoff leg, setting up Cal as one of the leading splits in the field. Cal’s third leg, Fabio Gimondi, couldn’t hold off Texas’ Jack Conger and Texas took the lead all the way until the end, leaving Cal the silver. He followed up that performance by swimming the individual 50-yard free — he finished 6th, going 19.19. He returned for day two, this time starting off with the 200-yard medley relay where he was the anchor leg. Cal led the entire way after Ryan Murphy’s back stroke leg, and Messerschmidt finished it off helping Cal win gold. On day three Messerschmidt swam the 100-yard free in an extremely evenly split hit, but in the final he didn’t have his best swim and added nearly a half-second from his preliminary time, leading him to an 8th place finish for another All-America honor. He led off the 400-yard free relay, going nearly an identical time, giving Cal the boost they needed to medal, this time finishing with a bronze.