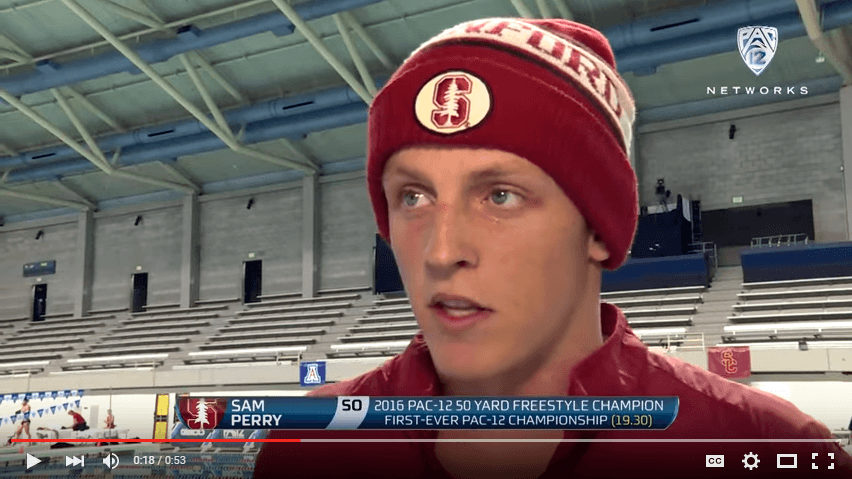 Sam Perry leads a Stanford team that holds a solid lead over USC heading into the final night of action at the 2016 Pac 12 Men's Championships. Current photo via StockImages

Not only is a conference championship on the line, but for a number of swimmers, this will be their last chance at securing a NCAA qualifying time.  We’ll keep you posted on swimmers who post times that should get them NCAA invites as the evening goes on.

Stanford continues to build its lead, taking two of the top three spots in this event.  Sophomore Liam Egan won the final heat by almost five seconds, beating Arizona junior Ty Fowler 14:44.85 to 14:49.44.  That swim puts Egan 8th in the country this season and puts Fowler 11th.  Stanford senior Danny Thomson had the fastest time heading into the final heat with a 14:52.12 and finished 3rd overall.  Utah’s Bence Kiraly finished 4th in 14:53.28, followed by ASU senior Juan Tolosa, swam a 14:55.22, which should punch his ticket for the national championships.  USC took 6th and 8th, with swims from sophomore Pawel Furtek (14:56.00) and senior Ted Singley (14.57.80).  In between them in 7th place was Cal freshman Nick Norman (14:56.53).

With California backstroke stars Ryan Murphy and Jacob Pebley battling each other to a 1-2 finish in the long course version of this event at the Orlando Pro Series meet, this event appeared to be wide open coming into today.  But USC freshman Patrick Mulcare swam the fastest time this morning and repeated that feat tonight, touching in first in 1:39.64, almost 1.5 seconds faster than anyone else.  That gives him the 5th-fastest time in the NCAA this year, and moves him ahead of Texas Longhorn Ryan Harty as the fastest freshman in the nation heading into NCAA’s.

Stanford sophomore Sam Perry earned 8th place in this event last year.  This year, he held off Arizona junior Renny Richmond to complete a sweep of the sprint freestyle events at this meet.  Perry was ahead of Richmond at the 50, but Richmond closed on Perry over the second 50, with Perry hanging on to win 42.72 to 42.78.

USC junior Steven Stumph earned his second consecutive victory in this event.  His time of 1:54.01 was .40 slower than his time from this morning, and 1.51 seconds off his time from last year, but it was still plenty fast enough to win this event by a comfortable margin.  Stanford freshman Matt Anderson took 2nd in 1:54.77.  ASU sophomore Christian Lorenz outsplit Cal junior Hunter Cobleigh just enough over the final lap to take 3rd, 1:55.32 to 1:55.34.

The top three finishers in the B-final had notable times.  USC freshman Carsten Vissering touched in 1:54.09, which would have finished just behind Stumph in the A-final.  California freshman Carson Sand swam a 1:54.92, while teammate and sophomore Connor Hoppe, last night’s winner in the 100 breast, touched in 1:55.23.

California freshman Andrew Seliskar completed his sweep of his individual events by holding off Arizona sophomore Justin Wright down the stretch and take the win, 1:41.53 to 1:41.76.  Seliskar, who came into Cal recruited as one the most versatile high school swimmers ever, won both individual medley races, swam backstroke on Cal’s medley relay in the absence of Ryan Murphy and Jacob Pebley, and was part of the Golden Bears’ winning 800 free relay.

California freshman Michael Thomas, swimming in the unscored C-final, made the most of his opportunity, swimming a 1:43.49 that gives him a good chance at a NCAA invite in the event.

California wrapped up the meet with a victory in the 400 free relay, while Stanford took 2nd place, with their overall victory already secured before the race began.  Justin Lynch led off for the Golden Bears in 42.71, the fastest opening 100 in the field, and Kyle Coan, Andrew Seliskar, and Long Gutierrez followed him to give Cal the victory in 2:51.47.  Gutierrez had the fastest anchor leg (or any leg, actually) at 42.47, not too long after swimming a 200 fly.

(Notably, Tyler Messerschmidt, who’s been a staple of Cal’s relays for years, did not swim this relay after swimming a 50 free time trial after the individual events wrapped up.  At the moment, Messerschmidt does not appear to have any individual times fast enough to secure a NCAA invite).

Stanford’s quartet of Sam Perry, Cole Cogswell, Connor Black, and Spencer DeShon took 2nd place in 2:52.04.  While the Cardinal had an insurmountable lead going into this relay, and would have won even if they had DQ’d, the 2nd place finish rounded out their team championship nicely.

Very surprised how relatively slow the 100 free final was this year. The winning time would have been 5th last season, and way off the marks set by Morozov 3 years ago or the 41.9 from Soedel just 2 seasons back. What’s going on in the PAC 12?

Slight correction to the article – Ralf Tribuntsov swam in last year’s 100 free A final as well.

And also Reed Malone was in the A final last year as well.

Thanks for the catch. Fixed.

Good for Michael Thomas – hope he can keep the momentum rolling off that swim into NCAAs.

I know in the past some Pac-12 guys have tried to make NCAAs without shaving and then shaved down on Day 3 of the conference meet or for the last chance meet the day after when it looks like their times aren’t good enough – might this be one of those instances?

He desperately needed that 2 fly, that will be his ticket to the dance… Not sure what happened with his backstroke, his finals performance was over a second off his junior year PB. Not sure you can chalk up an entire second to a shave, but no swimmer never has a bad race 🙂 wishing you fast swims from here on out, MT! PA is pulling for ya!

Can someone please find out what’s going on with Messerschmidt? He’s been so solid since his freshmen year last year was a great year for him and then this happens something’s not right

Tyler was out for an extended period with an injury. he lost a lot of the fall training period. just glad he’s back swimming. hope he still qualifies.

Cal still wins 3 of 5 relays without some of their biggest guns. If they can get Messerschmidt qualified tomorrow and in form, Texas better watch out!