Cal Edges Out Stanford In Final Dual Of The Season 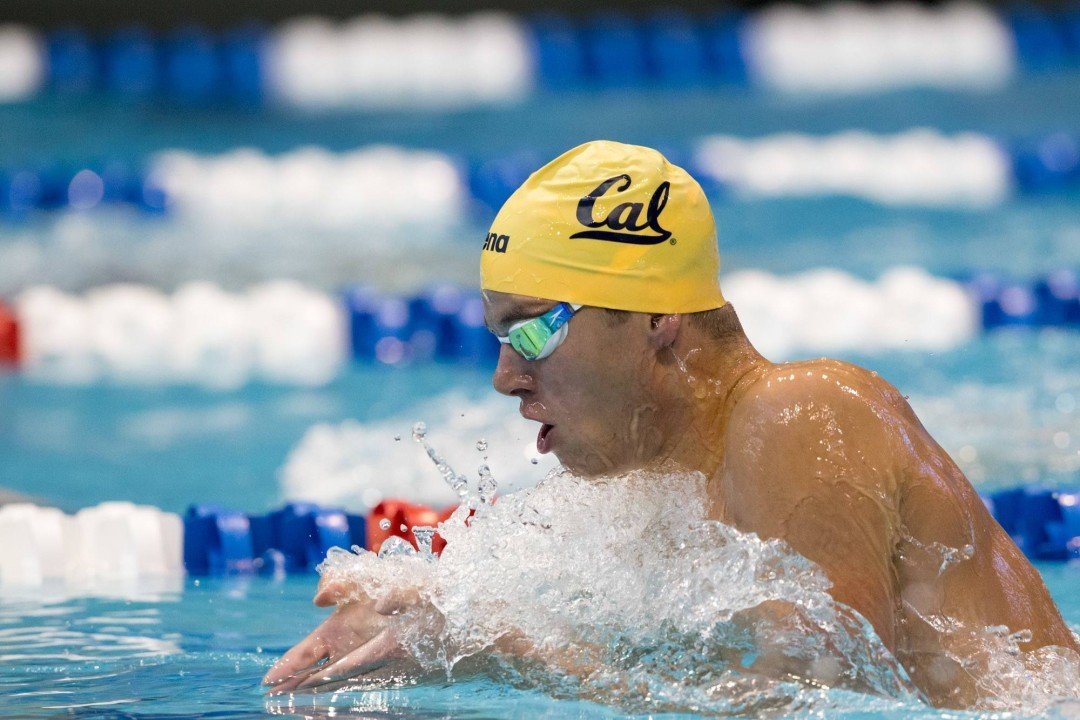 Josh Prenot had a pair of wins today, helping his Cal Golden Bears get by Stanford in their final dual meet of the season. Archive photo via Tim Binning/TheSwimPictures.com

The Stanford men celebrated Seniors Day at the Avery Aquatic Center as they hosted the Cal Golden Bears in both teams final dual meet of the season.

Trent Williams and Long Gutierrez kept Cal’s win streak alive, going 1-2 in the 200 freestyle. Williams got out fast and held on, winning in 1:36.60. Gutierrez outlasted Stanford’s Sean Duggan for 2nd in 1:37.44, and Cal’s Kyle Coan was 4th. After these first three events, Cal had already created a lead of 25 points over Stanford.

Cardinal Sam Perry put an end to Cal’s dominance, claiming the 50 free in a time of 20.09. Perry edged out Cal’s backstroke star Ryan Murphy who was 2nd in 20.20, and his teammate Tyler Messerschmidt was 3rd in 20.33.

2016 US Olympic hopeful Josh Prenot got Cal back in the win column, claiming the 200 IM in 1:45.38. Prenot trailed teammate Jacob Pebley at the halfway mark, but Prenot’s 29.33 breaststroke split (fastest in the field) gave him the lead and he was able to maintain that lead on the freestyle. Stanford’s Abrahm Devine overtook Pebley on the breaststroke as well, finishing 2nd in 1:46.98. Pebley settled for 3rd in 1:47.72.

Stanford’s divers got them back in the meet in the 1-meter event, sweeping the top 4 spots. Bradley Christtensen scored highest with 363.15, Tarek Abdelghany was 2nd with 343.50, and Connor Kuremsky was 3rd with 332.25. Stanford pulled within 14 points of Cal after the 1-meter, trailing by a score of 63-49.

Ryan Murphy and Long Gutierrez gave Cal a much needed 1-2 finish in the 100 freestyle, giving them a cushion in the points race once again. Murphy won in a quick time of 43.95, with Gutierrez close behind in 44.10. Sam Perry of Stanford was 3rd in 44.14, and his teammate Spencer DeShon was 4th in 44.90.

Stanford swept the diving once again, with Bradley Christtensen taking the 3-meter with a score of 440.63. Connor Kuremsky was 2nd (385.13), and Tarek Abdelghany was 3rd (382.95). A second diving sweep pulled Stanford within 13 points of Cal with jus the 200 breaststroke and 200 free relay remaining.

Despite the big relay win to finish the meet, Stanford wasn’t able to make up their early deficit, ultimately falling to Cal by a score of 130-113.

Both teams will compete at the Pac-12 Championships which begin February 24th in Federal Way, WA.

With this time I don’t think Stanford will be able to send many swimmers to NCAA. What a disappointment for the coaching staff! Since Skip has gone, the Men’s swimming program hasn’t improved much. So many talents but the coaches couldn’t do much with them. On the opposite, the women’s team is on the rise with Greg Meehan at the helm.

Nothing against Ted and staff personally, but in term of performance wise, it’s time for a change at the top and revamp the program.

Can’t wait to see what these guys will do once they really start to taper after Pac 12’s.

It’s sad that Stanford’s divers will never get to carry home a trophy despite carrying the team all season.