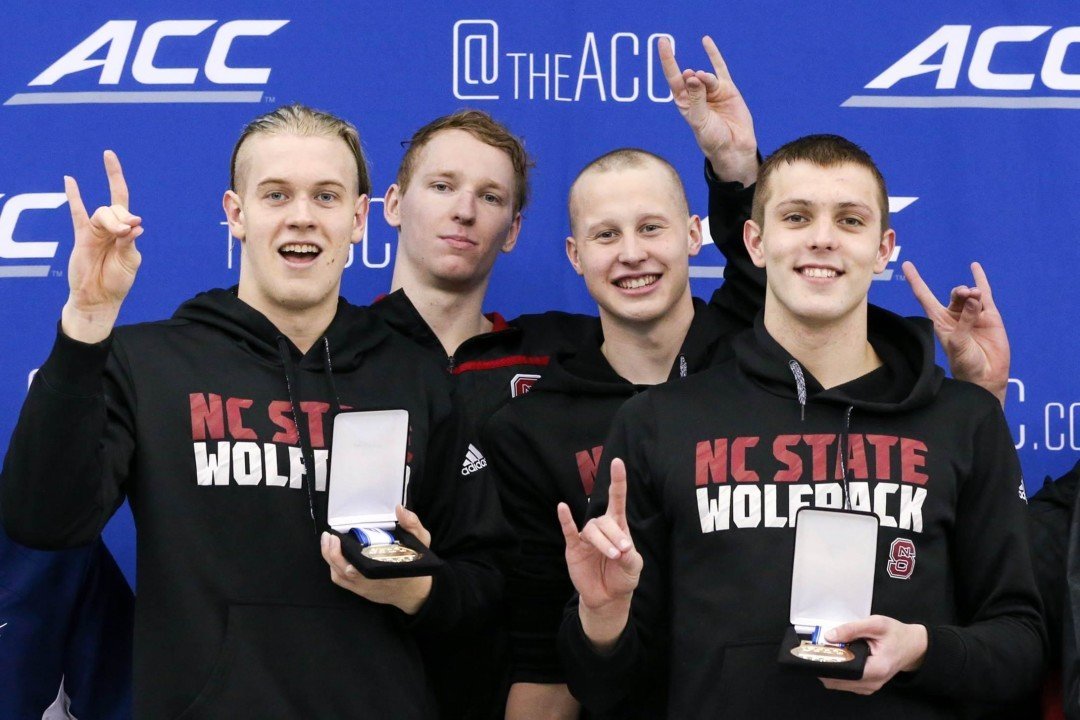 Since finishing 12th last season, NC State has improved their 200 medley relay tremendously. The Wolfpack put up a 1:23.19 at ACCs, to take the top seed heading into NCAAs. Archive photo via Tim Binning/TheSwimPictures.com

Since finishing 12th last season, NC State has improved their 200 medley relay tremendously. The Wolfpack put up a 1:23.19 at ACCs, to take the top seed heading into NCAAs. Their biggest strength is their back half, made up of Simonas Bilis and Ryan Held. Bilis posted a 20.27 fly split on that relay, and will look to crack 20 seconds on that split to give the team an edge. Held was a blazing 18.16 on the anchor, getting closer to the 17-second mark that only Vlad Morozov has achieved. Hennessey Stuart and Derek Hren have been solid on the back and breast, with splits of 21.22 and 23.54. If they can improve on those splits, we could see the Wolfpack on top of the podium this year.

Florida’s 1:23.69 from the SEC Championships has them as the 2nd seed, with the potential to challenge for a top 3 finish. The Gators got a quick 20.93 from Jack Blyzinskyj on backstroke, and an impressive 23.43 breaststroke split from Caeleb Dressel. Although breaststroke isn’t a primary focus for Dressel, he can still hang with the best breaststrokers on that split. That Gators can make that work since they have Corey Main, who split a 19.00 at SECs, to swim the freestyle leg. Their flyer, Jan Switkowski, has been in the 20-low range this year. If he can dip under 20, the Gators are a big threat.

Arizona, the 3rd seed, won this relay at the Pac-12 Championships this season, putting together a 1:23.74. The Wildcats have gotten big swims from their newcomers this season, as 3/4 of their relay will be freshmen. Chathams Dobbs is toying with the 21-second barrier on the back split, and Chad Idensohn has given Arizona a 19.95 on the fly leg. Notably, their fastest breaststroker Blair Bish split a 23.28 on the B relay at Pac-12s, where he was 3 tenths faster than their A relay split. That means their team could be even faster come NCAAs.

Tied with Arizona for the 3rd seed are the Auburn Tigers, who swam a 1:23.74 at SECs. Their breaststroker, Michael Duderstadt, split a 23.22 for them in that race. That was the 2nd fastest split of the field. Peter Holoda is also a huge asset for Auburn. He anchored in 18.57 to bring the Tigers up to a close 2nd. Holoda also outsplit Alabama sprint star Kristian Gkolomeev to touch out the Crimson Tide.

Speaking of Alabama, they come in at 5th, just a hundredth behind Auburn and Arizona. Gkolomeev has been 18-mid as their anchor this year, and has proved he can be even faster than that with his 18.24 at last year’s meet, where they came in 2nd. Connor Oslin should get the Tide off to a good start on the backstroke leg. He’s been a 21.01 this year already, not far from his 20.78 in NCAA finals last season.

Tennessee has the 7th fastest time heading into NCAAs, with a 1:24.09. Their breaststroker, Peter Stevens, has put up the fastest split in history at 22.72. Freshman Kyle Decoursey has given them a sub-19 anchor leg with an 18.84. They’ll need to get a bit more out of their back and fly legs to stay in the top 8 this year. Sean Lehane has been 21-mid on back, and Tyler Mills has been 20-high on fly.

This race will get interesting beyond just the top 8 seeds. The defending NCAA champs in this relay, California, enter the meet as 12th with a 1:24.62 from Pac-12s, but that may not accurately reflect what they can do. At that meet, they were without Ryan Murphy or Jacob Pebley, who were competing in the Orlando Grand Prix. Instead, Andrew Seliskar swam the back leg for them at Pac-12s in 21.97. Murphy led off their winning relay in 20.64 last season. That alone cuts 1.3 seconds off their seed time.

Aside from the backstroke leg, the team has a solid 23.36 from Connor Hoppe on the breast split and a 19.13 from Tyler Messerchmidt on the anchor so far this season. Messerchmidt has been off in his individual swims, but still put up a good relay performance. He’ll need to be under 19 if they want to repeat as champions. Swimming in between those 2 on the fly leg will be Justin Lynch, who came close to cracking 20 on the fly split with a 20.16 at Pac-12s.

Texas also sits outside the top 8, coming in with a 1:24.34 for 9th. Their backstroker, freshman John Shebat, has been having a great season. He led off this relay for the Longhorns in 21.17, which means he’s already been faster than Kip Darmody was on their 3rd place relay last season. Joseph Schooling, who is currently the fastest 100 butterflier in the NCAA, will swim the fly leg for the Longhorns. He’s swum 19.9 on multiple occasions, including a 19.94 at Big 12s.

To win they’ll need a big swim out of John Murray on the breast leg to keep them going on the back half. He’s swam 24-low at Big 12s, but has been as fast as 23-mid from last year’s NCAAs. Following him up in the free leg could be either Brett Ringgold or freshman Tate Jackson. Both have already been sub-19 this season, but Jackson had the faster split at Big 12s with an 18.78.

Dark horse: The USC Trojans come in as the 11th seed with their 1:24.50 from Pac-12s. They haven’t returned any members of their 6th place relay from last season, but still have plenty of talent. Ralf Tribuntsov led off that relay in 21.11, Carsten Vissering was 23.69 on breast, Alex Valente was 20.33 on fly, and Kyle Grissom was 19.31 on free. Tribuntsov has plenty of speed, and he’s split 21-mids to the feet in his 100 backstrokes. He’s capable of going under 21 in the 50 for this relay, and that would help them get into the top 8.

Picking Alabama 7th is laughable considering they returned everyone.
But then again last year they took 2nd and swimswam didn’t pick them in the top 8 so it’s nothing new.

People last year, myself included, thought Texas would destroy this relay. Not the case considering they ended up like 4th. And on top of that, a backstroker to replace- and do not give me that Conger can replace him crap because we all know Congers backstroke is not anywhere near what it used to be (which is fine, his fly is better than his backstroke ever was) Shebat can maybe get close to 21 but certainly not under. Texas will have to rely heavily on the back half, which is much harder in 200 medley, than 400. Now NC State. I do not see them dropping time. Even if all three legs of the relay drop, Held will almost certainly… Read more »

Held was not at or near full rest, as ACC’s is not as big a meet as NCAA’s and not nearly as big as Olympic Trials. I think he can continue his success and keep his splits down around 18.1. The question for State is on the front half, and if Stuart can break 21 or if Hren can break 23.5 or lower. If both those guys can do that, they can drop time, possibly dip under 1:23, and possibly win.

your statement is slightly confusing. you say he was not near full rest at ACCs but then say his split will stay around 18.1. Wouldn’t his times get noticeably faster with a full rest, say around 17.8? Regardless it will be difficult for him to replicate the 18.1.

No way Murphy has a .5 advantage. Oslin from Bama was only a tenth behind him last year.