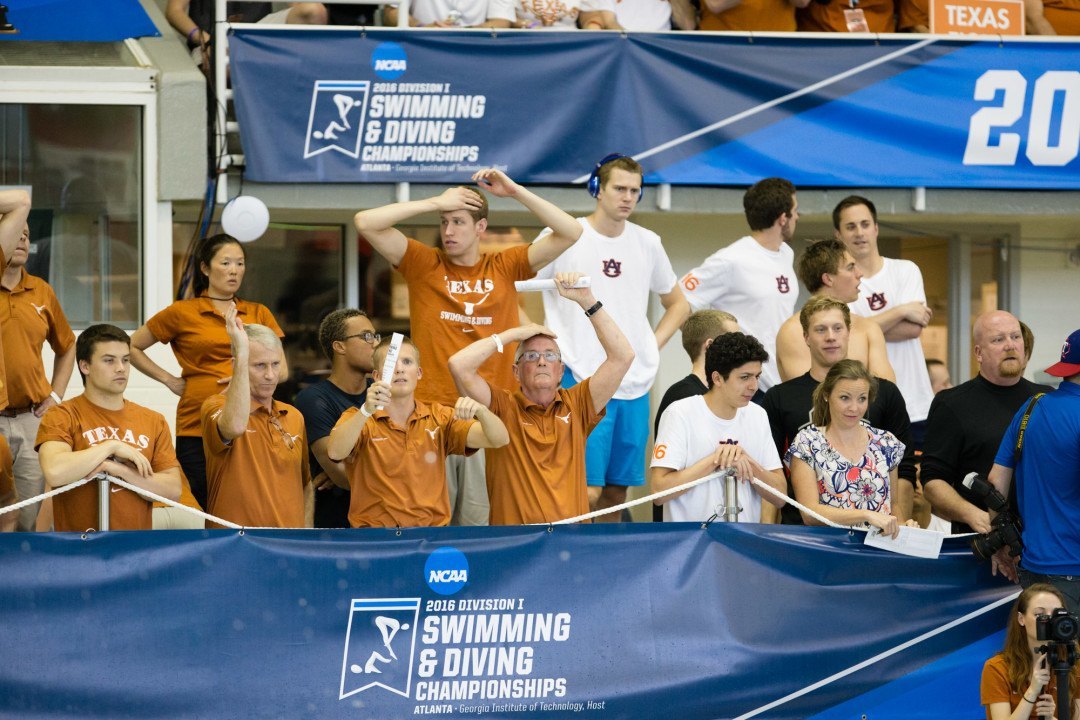 The NCAA Champions from the University of Texas outscored the 8 scoring teams from the Big Ten at the men's NCAA Championship meet. Stock photo via Tim Binning/TheSwimPictures.com

The Texas men were so dominant at the 2016 NCAA Swimming & Diving Championships that they single-handedly outscored all but 3 conferences at the meet.

Their 541.5 points is 5 more than the 8 Big Ten teams that were represented at the meet by swimmers scored combined.

Texas was joined by West Virginia at the meet, but the Mountaineers failed to contribute to the scoring load.

By sheer overwhelming dominance, the SEC, with 6 of the top 10 teams, came away with the most points at 1440.5. That’s more than twice as many as the next-highest scoring conference, the Pac 12. The SEC also had the most diving points at 121.

The Big Ten was the lowest-scoring conference among the “power 5,” due in large part to a 139.5-point slide from their swimmers versus seed. A 101-point performance from the conference’s divers, the second-most behind the SEC, helped lift them, however. The Big Ten’s highest-placing team this year was Indiana at #9, with Michigan coming in at 12th.

Top honors among mid-major conferences went to the Mountain Pacific Sports Federation. The school was represented by two scoring teams, BYU (40 points) and Hawaii (12 points), which put them ahead of the Ivy League’s 49 points (from 5 teams).

This was a year to celebrate for the mid-majors. In general, while the top swimmers at the meet put on the most incredible record-breaking display we’ve seen outside of the supersuit era (and maybe even moreso than that), the big teams also had a lot of faltering from their mid-pack athletes. The result of those slips, along with a few breakthroughs from mid-major veterans like Chris Swanson and Cleveland State’s Philipp Sizatski, was 47 scoring teams, up from just 40 last year.

Below, see a table breaking down each conference’s performance at the meet.

Does it help or hurt that OSU has 52 swimmers on their roster? Survival of the fittest doesn’t always lead to the best results. No focus at all.

Notre Dame did not score any points so only 10 out of the 12 ACC programs scored.

That’s right – they showed up because they were seeded to score. I’ve corrected.

That headline is priceless

My god, your comments on Iowa are spot on! As a recent grad of the University (and yes I did swim), it turned into a running joke at how someone as incompetent as Marc Long could be the head coach of a major division one program. He follows the NCAA rules, sure. But he is one of the dirtiest and alimiest people I’ve ever met. I’m now a coach and well connected within my home states swimming community, I’ll never promote the University of Iowa swim program to any talent in my state. I’ve emailed Gary Barta (the head a.d.) multiple times in regards to the program not improving. He either responds with typical “I’m not allowed to discuss” or… Read more »

I live in Iowa City, grew up in Iowa, and I sent several kids over to swim for the Hawkeyes in the past. I can’t ethically bring myself to ask athletes I trained to consider Iowa after the past 9 years and all the issues that have taken place with that program.
*Disclaimer: Marc Long and I were in each other’s weddings and I worked with him at the USA-S club level.

Even if you don’t look at Connor Dwyer just focus on the in-state and Midwest kids that have come through since the new CRWC pool was built. The results are not there.

Here are some big factors:
1. Most Big Ten schools (and their AD’s) make the conference championships a big deal and make it a big focus of the season. They taper all out for it outside of a handful of swimmers (and most of them being on Michigan).

2. Michigan was a bit down this year. They are reloading considering who they had the last 2 seasons. Mike Bottom will get them back on track but he did make great strides the last 2 seasons with the women’s team.

3. The Big Ten is full of foreign swimmers. This includes quite a few foreign swimmers aiming at earlier Olympic Trails / Qualifying periods. Some of these red-shirted… Read more »

What would Paul Powers look like now if he went to Florida? Perhaps Hoffer should meet with Troy.

It seems that the overwhelming truth of political mastermind, Marc Long, has surfaced once again. Manipulation, narcissism, sociopathic tendencies? Take your pick. The man has failed to have a successful team in IC since becoming head coach. But what’s worse is he has succeeded in ruining scores of swimmers’ talent, interest, and mental health in the process. When will the a.d realize that as long as Glenn Patton’s golden boy is head coach, there will be no progress made for the University of Iowa’s team.

I don’t know how the heck Michigan could get worse with all the deck personnel they have. At B1G they wouldn’t allow the host team a 4th person on deck. Michigan, by my count, had 10. Seems to be an advantage of having a combined coaching staff.

Mike Bottom is all about growing the sport, and I completely agree with his belief that a sport won’t attract fans if they only perform well once a year. It’s cool that Texas has big drops at NCAAs, but I respect NC State way more, swimming really fast at ACCs, winning their conference which is a big deal, and swimming just a touch faster on most events at NCAAs.

For the sport to grow, we need fast swims all the time. That’s what Michigan tries to do, and I believe more teams are trending in that direction, considering the insane duel meet and invite times we see all year. It didn’t work out for UofM this year. But as… Read more »

Auburn has the swimmers (and diver) to be a top 5 team. Hopefully they transition from trying to win SEC’s every year to performing at NC’s. They have underperformed every year and clearly need to change something

Agree. MI men very disappointing swims all around. Been years since they finished out of top 10 at NCAA’S!