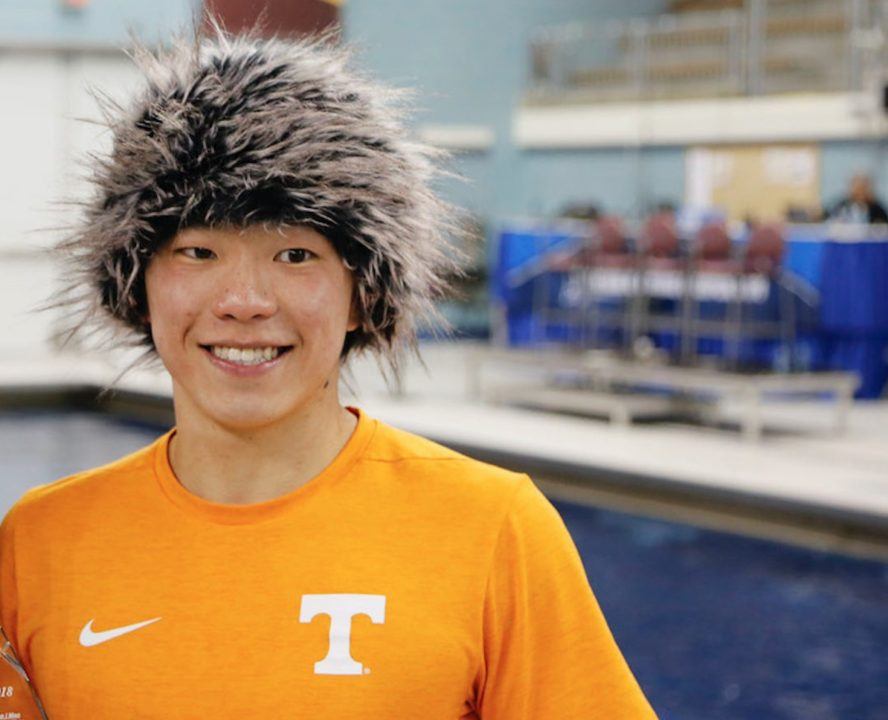 Colin Zeng was the highest-scoring diver in the NCAA last year, and Tennessee returns the bulk of its relays, which combined for 52 points in 2018. Archive photo via Tim Binning/TheSwimPictures.com

The Tennessee men rolled to 11th place at the 2018 NCAA meet largely on the back of diving transfer Colin Zeng. The former NCAA champion left Ohio State for Tennessee between his sophomore and junior seasons and delivered in a big way in his new stomping grounds. Zeng was the highest-scoring diver at men’s NCAAs, putting up 52 of Tennessee’s 123 points, winning the platform title and finishing inside the top 4 on all three boards.

Tennessee did most of its remaining damage through relays. The Vols scored in all five relay races, highlighted by a 6th-place showing in the 200 medley relay. Senior Peter Stevens was a powerhouse, with a 22.9 breaststroke split, and junior Kyle Decoursey split 18.5 on the end of that squad. The other four relays were in B final territory: 14th in the 800 free, 12th in the 200 free, 15th in the 400 medley and 14th in the 400 free.

Stevens led in individual points, but beyond Zeng, Tennessee had no one score double-digit points individually. Only 6 of the 20 relay legs were held down by seniors, so even though most of the team’s individual scorers graduated, the bulk of its points return.

Kyle Decoursey could single-handedly shift this grade up or down a full letter when all is said and done. The senior struggled individually at NCAAs, missing finals in both the 50 and 100 frees. But he was the powerhouse of their relays, splitting 18.58, 18.55, 18.68, 18.81, 41.68, 41.71, 42.04 and 1:33.92 across the freestyle distances from a relay start. Carrying that heavy an event load for the Vols may have tempered his individual impact some, but Decoursey has a chance to be one of the best sprinters in the NCAA after a number of the top names graduated in 2018.

Decoursey’s lifetime-bests (19.12 from SECs last year, 42.07 from SECs in 2017) would score in both sprint races, but he has to prove he can be at his best in the condensed NCAA Championships format, or at least close to how fast he’s traditionally swum in the expanded, five-day SEC meet lineup.

Junior Alec Connolly is coming off a breakout season. He was 20.07/44.12 as a freshman, but cut to 19.48/43.19 last year. If he continues to progress the way he and Decoursey have, the Vols should have a talented duo of experienced sprinters to bookend their relays.

Two of the teams better incoming freshmen bolster depth: Andy Thomas out of Pennsylvania is 1:35.8 in the 200 and 20.8/44.2 moving down in distance. Franco Reyes out of Illinois specializes on the opposite end of the relay spectrum, with 20.1 and 44.6 freestyle times.

The past couple seasons, Tennessee has had a lot of distance free talent on its roster that hasn’t always converted into NCAA production, owing often to injuries. This year, they have highly-touted recruit Taylor Abbott, an open water star who had a solid year in the pool last year (a lifetime-best 4:18.9 in the 500 and right at his best of 14:55 in the mile) but still didn’t qualify for NCAAs.

Garcia and Dunphy both specialize in other strokes, but could step up to score at SECs. Points at the NCAA level are probably too big an ask, though, as this won’t be the event of strength it was during McHugh’s career.

This group should be pretty good in the 100 fly, thanks to the Australian Braga Verhage. He holds down the 100 fly/100 back combo well, and placed 10th in the 100 fly at SECs last year. A couple weeks later, he actually cut six tenths of a second to go 45.90, though that wound up .01 seconds out of the eventual NCAA invite time. He’s probably in line to take over both medley relay spots with Ryan Coetzee graduated.

Decoursey can go as fast as 47.5, and freshman Franco Reyes has also been 47.5 in that event.

Up to the 200, McHugh once again vacates the team’s top spot, but Hinawi (1:44.43) is a decent option, though he has to double with the mile on the final day of NCAAs.

The 100 back will be an area of strength for the Vols. Matthew Garcia (46.49) and Joey Reilman (46.54) were very solid backstrokers last year, and Verhage can also go 47.11 in the second half of his 100 fly/100 back double. Last year Reilman led off the 400 medley at NCAAs and Verhage the 200 medley, but with Verhage likely taking both fly spots, it might be down to Garcia and Reilman to divvy up the backstroke roles.

Connolly could swim either 100 fly or 100 back as his tertiary event, but this one is probably his best bet after winning the SEC C final (47.46) last year. It’s going to take a big year for any of those four to score individually at NCAAs, but they should at minimum be able to hold down medley relay legs with good individual scoring upside.

Reilman was the team’s top 200 backstroker last year in 1:41.25, though that’s still a second away from the NCAA’s ridiculous scoring time. The Vols return two more men in the 1:41s last year: Nathan Murray (1:41.26) and Garcia (1:41.85). That’s very good depth within striking distance of NCAA scoring – it still probably won’t be a huge points haul at Nationals, but the backstrokes look well set for SECs at the very least.

Stevens is a big loss, not just from an individual perspective but for relay value as well. Consistently one of the best sprint breaststrokers in the country, Stevens was arguably the reason both medleys could finish in scoring range.

That said, Tennessee’s top recruit is aimed at replacing Stevens. South Africa’s Michael Houlie is actually coming in the door with comparable long course times to those Stevens had by the end of his college career. (Houlie is 27.6/1:01.4/2:16.7 in long course breaststroke, Stevens 27.0/1:01.2/2:27.5). Houlie is a lot better at the 200 and could be a bigger individual scorer, though the tradeoff is that he’s not as likely to pull out an elusive 22-second split on the 200 medley relay. Still, he should fill in the breaststroke spot well, assuming he can make decent headway in learning how to swim in short course yards.

Dunphy is easily the top 200 threat after going 1:54.66 last year. That’s only about three tenths from NCAA scoring range. Junior Jared Clance went 1:58.4 at the team’s last chance meet last year and could be in line for a breakout season. Houlie’s long course time suggests he should be well under two minutes, and freshman Dillard has also been 2:01.

The reason Tennessee still ranks so highly after graduating most of its top swimmers? Diving. Colin Zeng could easily match or exceed his 52 points from last year, especially with 1-meter champ Michael Hixon graduated for Indiana.

Every relay graduated someone, but 4 of the 5 relays only graduated a single leg: Stevens is off both medleys and Coetzee off the 200 medley. But between Dunphy/Houlie and Verhage, those teams shouldn’t be totally sunk.

Each of the free relays lost essentially its slowest split from 2018. The 200 free relay graduates Coetzee’s 19.8, but shouldn’t be hard-pressed to replace that split with one of its talented freshmen: Reyes or Thomas. Same goes for Hirstein’s 43.2 on the 400. McHugh was 1:35.2 on the 800 free relay, but Thomas has been nearly that fast in high school.

That’s reason to believe that neither diving nor relay points will take a significant hit in 2018. It’s the 19 individual points from 2018 seniors that will be the biggest issue to replace. But a better NCAA meet from Decoursey and/or continued development from Connolly would go a long ways. It’s also fair to project Dunphy as a scorer in breaststroke, with Houlie as a high-ceiling wildcard.

This isn’t the most well-rounded roster – the hole at IM, in particular, is a liability in dual meets. But don’t let that make you underestimate this Tennessee team, which is built to be sneaky-good in SEC and NCAA competition.

So did Franco Reyes transfer from Georgia Tech? I haven’t seen anything on it other than him appearing on the preview.

A top 12 finish in 2019 will be great for the Manly Vols diving and swimming team. The Lady Vols should carry the swimming program though with a Top 5 finish in the books. A sneaky good program. The Manly Vols might be bringing in more help at mid-year.

Their football team needs some work though 😉