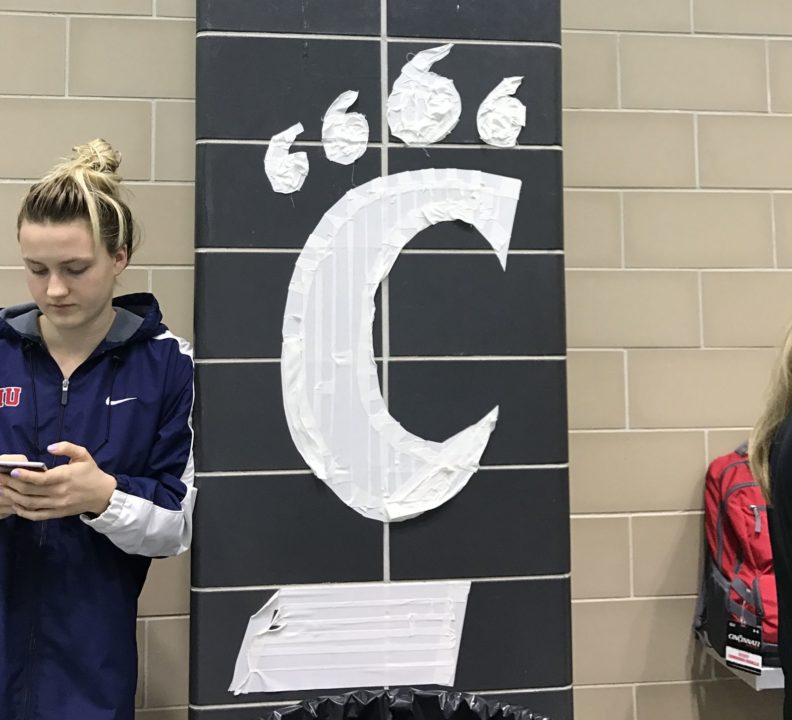 Cincinnati hosted D3 powerhouse Kenyon for the Bearcats’ Senior Day at Keating Aquatic Center on Saturday, January 27th. The Bearcats won a combined 27 events en route to beating the Lords in both the men’s and women’s meets.

Chris Bready broke his own pool record in the 1000, posting a 9:04.70, winning by 28 seconds over runner-up Toby Van Dyke. Bready threw down a slight negative split (4:43.43/4:32.27), while going only 2 seconds slower than what he split at the 1000 in the 1650 at Winter Nationals in December. Bready leads the AAC rankings by 4 seconds over his teammate, Din Selmanovic.

CINCINNATI – It was a successful senior day at the Keating Aquatic Center on Saturday as University of Cincinnati swimming and diving wrapped up the regular season. The Bearcats men won 219-81 while the women won by a score of 213-87.

The meet began with some impressive diving scores from seniors Mitch Godar and Ellen Posch while the swimming portion of the meet was highlighted by a new pool record by senior Chris Bready. Posch clinched a NCAA zone cut, making her the fourth Bearcat to do so this season. That is a record high for the program.

// TOP SWIMS
• The Bearcat women opened the meet with a win in the 200 medley relay. Lindsey Niehaus, Kennedy Herbert, Katherine Gob and Maddie Exton swam the event in 1:44:28
• UC’s men followed with a win in the 200 medley relay with a time of 1:33:15. Joey Puglessi, Zach Hostoffer, George Epsly and William Sigala earned the victory
• Rocky Laabs won the 1,000 free, coming to the wall in 10:10:42. Senior Sara Wanasek finished second and Laura Johnston came in third
• Senior Chris Bready broke his own pool record in the 1,000 free. He finished in 9:04:70, four seconds shy of his own school record. Toby Van Dyke took second in the event and Tyler Jones took third
• Senior Sydney King was second in the 200 free while Michaela Wheeler was third
• Din Selmanovic won the 200 free with a time of 1:39:80. Justin Crew finished second
• Niehaus took second in the 100 back while Tal Kidron took third
• Puglessi and Remington Oland finished second and third in the 100 back, respectively
• Senior Herbert won the 100 breaststroke with a time of 1:04:73. Grace Seibert took third
• The trio of Zach Hostoffer, Chris Quarin and Macon Graves swept the 100 breaststroke. Hostoffer’s time was 56:61
• The 200 fly was also swept by the Bearcats. Simone Palomo took first in 2:04:77 followed by Katie Qualls and Samantha Wheatley
• Senior Ryan DePietro won the 200 butterfly in 1:52:71 while Epsly took second
• Niehaus won the 50 free with a time of 23:75. Claire Farrell was second and Exton third for another UC sweep
• Sigala won the 50 free in 21:38. Alex Fortman was second
• Exton captured the win in the 100 free in 51:84. Wheeler placed third
• Sigala led a sweep of the 100 free with a time of 45:66. Fortman and Justin Crew finished behind him
• Puglessi won the 200 back in 1:51:58. Dom Polling was second
• Natalie Obando was second in the 200 back followed by a third-place finish from Tal Kidron
• Dee Sopapong won the 200 breaststroke in 2:22:63. Herbert took second and Seibert third
• UC men swept the 200 breaststroke led by a 2:08:47 finish from Quarin. Zach Baecker was second and Graves third
• Laabs earned her second win of the day in the 500 free with a time of 5:01:25. Caroline Sheehan and Sara Wanasek finished second and third for a UC sweep
• Selmanovic took the 500 free with a time of 4:29:48, just out-touching Bready who took second
• Palomo won again in the 100 fly with a time of 57:32. Exton was third
• Sigala also earned another win as he swam the 100 fly in 50:56. Epsly finished the event in third
• Wheatley took second in the 200 IM in 2:06:59 while Wheeler placed third
• Polling won the 200 IM in 1:52:76 while teammate Ryan DePietro finished second
• UC women took their final event of the day, the 200 free relay, with a time of 1:35:64. That event was swam by Gob, Niehaus, Abby Johnstonand Farrell

// TOP DIVES
• Senior Ellen Posch scored the win in 1-meter with a 269.10. Tricia Roscoe and Claire Schuermann took second and third, respectively
• Posch also won 3-meter with a 305.80, which propelled her to third all-time in the UC record book. Schuermann placed second and Kaley Pook third in the event
• Senior Mitch Godar won the men’s 1-meter with a score of 343.70, a personal season-best. Louis Hunt came in second and Issac Karn placed third
• Godar also won the 3-meter with a 351.90, also a season-high and good enough to move him up to second-best in UC history. Karn was second while Gus Staubitz finished third

// COMING UP NEXT
• The postseason is approaching as the Bearcats aim to take home a conference title
• The American Athletic Conference Championships are set for February 14-17 in Dallas, Texas
• NCAA Zone Diving Championships will be held in early March with NCAA Championships in swimming held mid-March

CINCINNATI, Ohio – Wrapping up its 2017-18 dual meet schedule at the University of Cincinnati on Saturday afternoon, the Kenyon College women’s swimming and diving team dropped a 213-87 decision to the NCAA Division I Bearcats.

Despite the final outcome, the Ladies turned in some impressive individual swims. Leading the way for team Kenyon was freshman Crile Hart, who captured a trio of event victories. She nailed down her first win by clocking in at 56.20 in the 100-yard backstroke. Next, Hart raced to victory in the 200-yard backstroke with a time of 2:03.85. Finally, she finished off her day by completing the 200-yard medley relay in a winning time of 2:06.38.

Junior Hannah Orbach-Mandel provided some reinforcements for the Ladies. She notched Kenyon’s first win of the day by taking the 200-yard freestyle in 1:52.58. Five events later, she grabbed the runner-up spot in the 100-yard freestyle by clocking in at 52.54.

Those four event wins were all for the Kenyon women, but they did register a couple more top-three finishes and those came from freshmen Amy Socha and Makena Markert. Socha was second in the 100-yard butterfly and Markert was third in the 100-yard breaststroke. Their respective times were 58.08 and 1:07.50.

The team loss put Kenyon’s final dual meet record at 4-3. The Ladies will now focus all their attention on the upcoming North Coast Athletic Conference Championship, which starts Wednesday, February 14 at Denison University.

CINCINNATI, Ohio – NCAA Division I University of Cincinnati earned a 219-81 victory against the Kenyon men’s swimming and diving team on Saturday afternoon in a dual meet at the UC Campus Recreation Center.

Kenyon did notch a couple of event wins and several more top-three finishes during the day.

Ben Baturka dialed up the team’s lone individual event victory in the 100-yard backstroke with a time of 50.74.

In the final event of the afternoon, the 200 freestyle relay, David Fitch, Weston Carpenter, Tommy Weiss and Reilly Shields touched the wall with a winning time of 1:25.27.

Kenyon’s quartet of Baturka, Shields, Marcus Hong and Kieran Allsop added another runner-up spot for the team with a 1:33.48 time in the 200 medley relay.

During diving competition, Ryder Sammons placed fourth in both the one-meter and three-meter boards.

Up next for the Lords is the North Coast Athletic Conference Championship set for February 14-17 at Denison University’s Trumbull Aquatics Center.