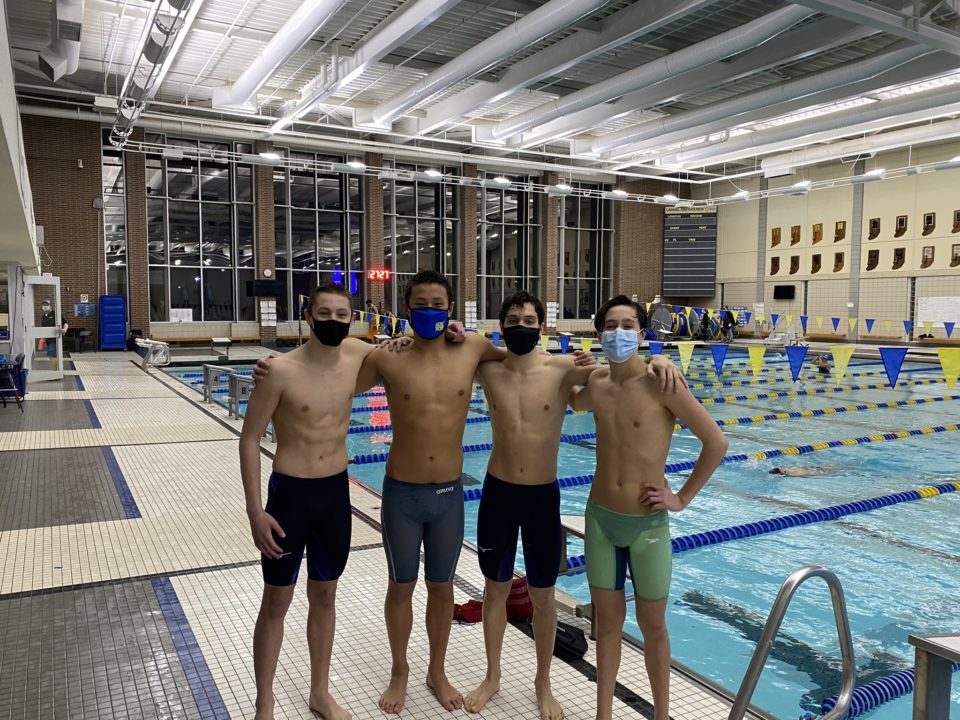 Racing on day 2 of the Carmel Swim Club’s three-day tri meet with nearby Lakeside Aquatic Club and far-away Fort Collins Area Swim Team, the 13-14 boys of the host team set another National Age Group Record in the 400 free relay on Sunday.

Following the record-setting swim in the 400 medley relay from Saturday, the group of Carter Lancaster, Lewis Zhang, Emile Haig, and Gregg Enoch combined for a 3:08.77 in the 400 free relay during a time trial session on Sunday.

The new face on the relay was 13-year old Lewis Zhang, who replaced breaststroker Brandon Malicki from the medley relay. Otherwise, the two relays were the same, including swim order.

Including his leadoff leg on the 400 medley relay, he has swum times in four different events that now rank him among the top 20 all-time in 13-14s across two days of competition:

Lancaster is scheduled to swim the 200 IM and 200 breaststroke on the meet’s closing day on Monday.

CSC has gathered some speedy 13-14 boys in the last year.

Way to go Carmel! So many amazing swims and new cuts.
Thrilled that all of the kids get this opportunity.

OK this is an honest question, Jason Lancaster His dad was really fast to. He had the 200 IM National record for almost 20 years at 1:46 back in I like 94 till Kyle Whitaker broke it,another Indiana men I may add, but I wonder if his son is faster than he was at this age?