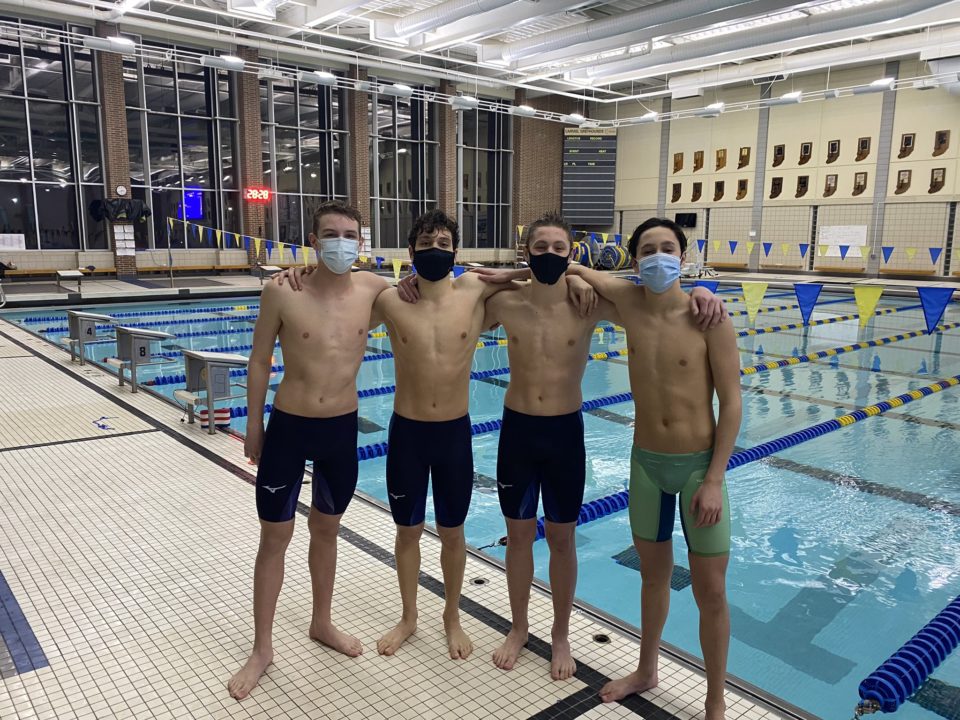 During a tri-meet, Carmel Swim Club crushed the NAG in the boy’s 13-14 400 medley relay by over 2 seconds, which was set by NCAP earlier this year. Current photo via Carmel Swim Club

A tri-meet between Carmel Swim Club, Lakeside Aquatic Club, and the Fort Collins Area Swim Team resulted in some historic swims on Friday and Saturday. On Friday night, swimmers competed in long course time-trials, while the rest of the weekend will consist of short course yards racing.

On Saturday, a quartet of swimmers from Carmel Swim Club lowered the 13-14 NAG in the boys’ 400 yard medley relay. The team of Carter Lancaster, Brandon Malicki, Emile Haig, and Gregg Enoch combined for a time of 3:24.49 to take over 2 seconds off of the old record, set by Nation’s Capital Swim Club at the PV Senior Championships back in March.

Carmel’s relay made up the majority of its record-setting pace on the first two legs of the relay, with Lancaster splitting over 2 seconds ahead of Mullens’ pace and Malicki getting to almost 3 seconds ahead of Evans. Although they lost some ground on the back-half, the relay still managed to demolish the record. Since the beginning of this season, both teams have combined to drop over 4 seconds off of the 2016 record, set by King Aquatic Club, which stood at a 3:28.16.

Individually,  Lakeside’s Annabel Crush posted a best time in the 200 freestyle, dropping over a second to finish in 1:46.48. Crush is currently the #7-ranked female swimmer in the class of 2021. Next year, she is slated to swim for NC State.

17-year-old Gretchen Lueking finished second to Crush, posting a personal best as well. Lueking dropped over a half second to finish in a time of 1:46.51.

On Friday, Lueking also had a strong showing, dropping over a second in the 100 meter freestyle to finish with a time of 56.32. Her time puts her .03 away from the Olympic Trials cut, which stands at a 56.29.

Are the Lancaster brothers related to Jason Lancaster?

It looked like a fast meet and the Carmel kids, once again, were lighting it up. There’s a Gregg Enoch that was on that relay. I’m sure there has to be some relation to the Enoch boys that were on some of Carmel’s state championship teams in the 1990s & 2000s.

Yes, they are his son’s

Yep! Father/son. Congratulations to Carmel for continuing to do amazing things!

Hadley and Rothrock will do wonders on Rocky Top. Congrats to them!

Looks like that split from Lancaster is a pretty massive best which moves him from 83rd to 8th in the all time list for 13-14 boys.

I’m gonna guess this is Jason’s son/nephew. Back in the day, Jason held the 200 IM state record for a long time. Speed must run in the family.

Congrats to Carmel’s 13-14 boys … it would have been something to see their record-smashing swim in person but for the pandemic! That group of boys (and girls) has been fun to watch the last 2-3 years! More good things to come!