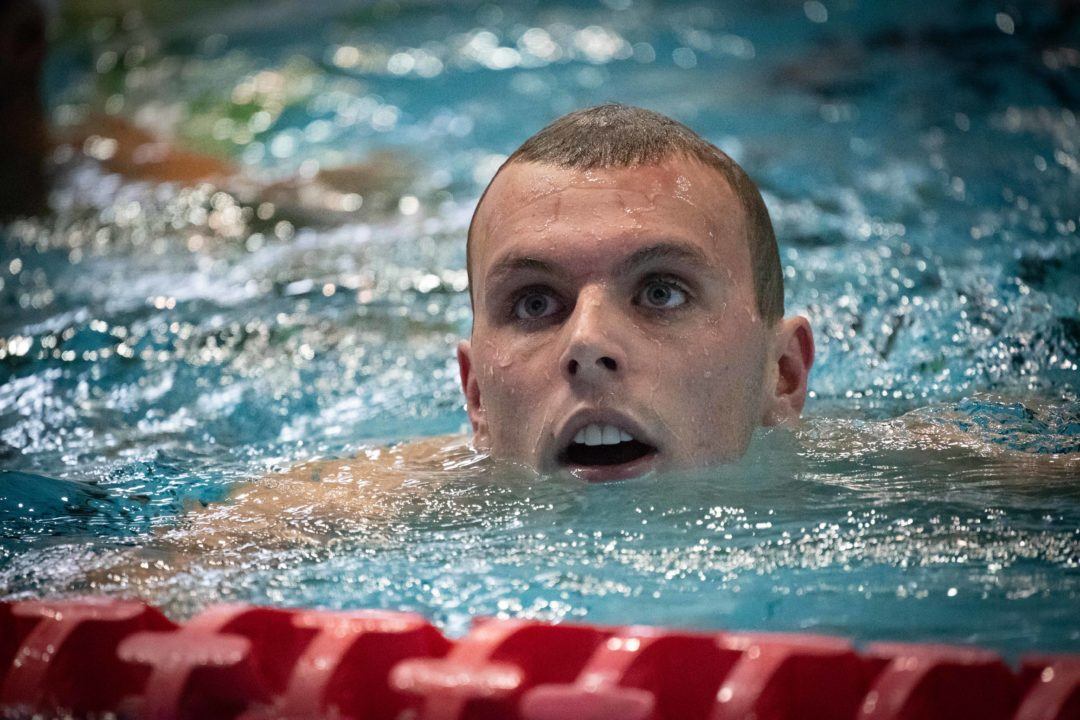 Betting odds have come out for the men's 100 freestyle at the World Championships, with Caeleb Dressel (-150) the favorite over Kyle Chalmers (+162). Archive photo via Mike Lewis/Ola Vista Photography

After betting odds were released a few days ago for four head-to-head matchups at the upcoming FINA World Championships, there are now full odds available for the men’s 100 freestyle.

On Betway Sports, there are a total of 18 swimmers you can bet on to win the event. Check out the odds below:

The implied odds essentially state that based on the line, Dressel should win the race 60.00% of the time.

In terms of who the pick would be here, it’s tough to say. In our preview we have Dressel, Chalmers, and then Vladislav Grinev in that order, which reflects the odds. Miressi, who we have fourth, only has the ninth-best odds, but he would need the stars to align perfectly to actually win outright.

The race between Dressel and Chalmers is closer than the odds indicate, so despite the fact I did pick the defending champ to win, a bet on the Olympic gold medalist makes sense. I also give Grinev a chance to win based on what we’ve seen from him this season, maybe around 20% of the time, which is better than where the odds have him (14.29%).

A bet on any of those three is explainable, but if I had to make a selection, I’d go with Chalmers at the current odds. The line has Dressel too big of a favorite to warrant a bet given the variability of the sport (that’s what makes this so fun!).

However, if confidence on Dressel is sky-high, he’s a great parlay piece (multiple bets in one) to throw in with other picks.

Given the limited amount of swimming betting that is out there currently, it’s unlikely that after the prelims (and semis) the odds would fluctuate to reflect what the swimmers have done. Perhaps that will come in the future, but chances are they’ll get shut down before the event starts (or maybe even before Worlds starts). But if they’re still out there after the 400 free relay, which is on the opening night, you’ll have a better sense of who is on form and may be able to take advantage.

We’ll keep an eye on the lines and see if more odds are released over the course of the next week.

Chierighini at 4th still looks weird to me. I know he’s been 47, but after following his time at Auburn I didn’t think of him as an Olympic finalist for an individual event.

I had the same feeling after his NCAA career but now…? It’s looking more and more like he’ll prove us wrong.

The best bet in there is Scott, I think most other odds broadly reflect their actual prospects (arguably slightly low on Chalmers, but US bookies would take a beating if they gave Dressel and Chalmers closer odds and Dressel still won).

Imho the best bet is Miressi: he is young, has already a gold at European level, a PB under-48 (from last year) and a great odd.
Even if he doesn’t win (or he bust) you only lose 10$ (to trying winning 400)

Is it true that Park went 47,97 at Korean nationals?

First I’ve heard, who told you that?

It is on fina ranking db, this park seonkwan who is on the bet list

he did that , its correct ,i remember well .