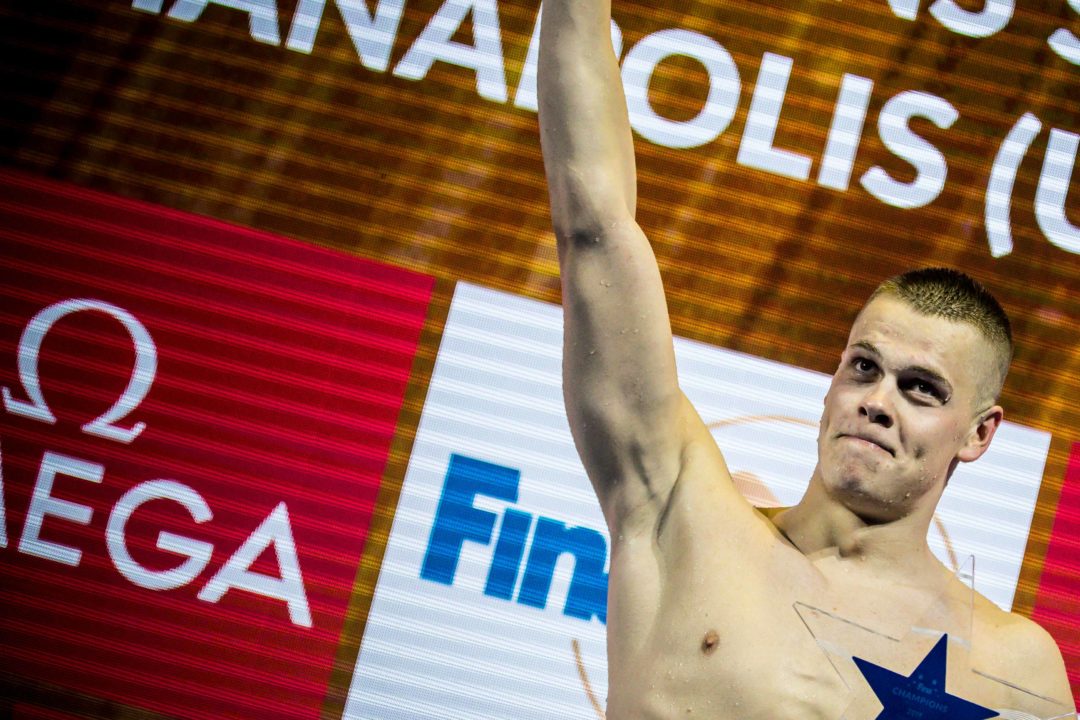 Who will finish higher in the 200 free at the 2019 World Championships: Danys Rapsys (above) or James Guy? Guess right, and you can make some money. Archive photo via Jack Spitser/Spitser Photography

While it might sound foreign to our American audience, in Europe one can set gambling wagers on almost any subject under the sun, from World Cup matches on down. That includes aquatic sports – with bookmakers having begun to release odds for the 2019 FINA World Aquatics Championships in both swimming and water polo.

While we expect more odds to be released in coming weeks, to date betting site bwin.com is the only one we could find that has swimming odds posted for Gwangju (at least, that I was able to access in the United States). Specifically, they have odds for “head-to-head” matchups in 4 races. In these bets, you choose which of 2 swimmers will place higher in a specific race. That is, you’re not picking a swimmer to win the event; rather, just a swimmer to finish higher than the other listed in the bet. In event of a tie or a scratch (in prelims), it’s a dead heat and everyone gets their money back. If one fails to advance from the prelims or semi-finals, the other wins.

Each of these 4 bets seem to have been intentionally chosen as “trap” bets, where there’s a heavy favorite, with a low payout, seeing if the emotional gamblers from the other side can be baited into making a bad pick with promises of a high payout.

Below, check out the 4 matchups, focused on European participants, and who we’d pick in each:

It’s interesting how dramatically-swayed towards Rapsys this line is, given how close their lifetime bests are. Rapsys has been 1:45.12, while Guy’s best is 1:45.14. The difference is timing: for the 24-year old Rapsys, his best time came last year, and 8 of his 9 best times have come in the last 18 months.

This is another line that feels too big in favor of the favored. Wellbrock has been 2.5 seconds faster than Christiansen has, with Wellbrock’s best time coming in April of this year in 7:43.03 (a necessary taper to meet the brutal German qualifying standards).

So, Wellbrock is again the favorite of the two, but does the line justify the size of that advantage?

Both swimmers are still young – Christiansen is only 22, Wellbrock only 21. Christiansen finished higher in the 800 (4th) at Worlds in 2017 than did Wellbrock (7th), and was 8 seconds faster. At last year’s European Championships, Wellbrock (3rd) was 1 place and 1 second ahead of Christiansen (4th).

Of the 4 bets being offered by bwin, I like this one the least. But, again, I’ll take Christiansen, the underdog. I think there’s always risk with a swimmer who drops 2 seconds at their trials, that they won’t be able to repeat it, and the Wellbrock payout doesn’t justify that risk.

This would have been a way more fun bet in the 400 free, where Titmus’ 3:59.35 at Australia’s Trials meet is just .07 behind Ledecky for 2nd in the world. As is, Ledecky is still the world’s dominant force in the 800. One day, Ledecky will no longer be the fastest woman in the world in the 800, but that day doesn’t seem to have arrived yet – and if someone’s going to catch her, it seems more likely that it will be China’s Jianjiahe Wang.

I’m also a little skeptical that Australia, working out the details of a new, closer-to-championship selection meet ahead of next year’s Olympic Trials, has nailed down a 6 week turnaround yet. While the Americans have tons of experience with this from the NCAA system, it’s still fairly new to Australia, and Titmus looked like she was in full form in early June.

So, the smart pick here is Ledecky. But, the rate of return on a wager is only 3%. You can get a 6-year CD from Goldman Sachs for 2.95%. Save the risk, buy the CD instead.

I’m actually a little surprised at how low the odds are for Sjostrom in this race. While the world is closing in on her in the 100 fly a little, with no Ikee, she’s still in a league of her own in the 50. Last year, she led the world with 25.07 – faster than anyone in history besides her has ever been – and the next-closest swimmer who is racing at Worlds was Cate Campbell, in 25.47. Yes, Sjostrom and Kromowidjojo were 1-2 at Worlds in 2017, but the reality is that Sjostrom is still in a league-of-her-own in this race.

This is actually my favorite bet of the four – the %13 return isn’t spectacular, but it’s solid given the margin of confidence.

And for those interested in water polo, bwin has odds for that too: the US women are favorites (-500, implied probability 83.33%), and rightfully so: they’ve won the last 2 World Championships and won the most recent major international tournament: the FINA World League. Greece, who the US just swept in California in a 3-game series, is matched with Russia, Australia, and Italy as vice-favorites (+1400), followed by Hungary. Italy played the US to 10-9 in the World League final.

In the men’s tournament, the familiar trio of Serbia (+120), Croatia (+260), and Hungary (+300) are the top three picks by the bookmakers, albeit with much lower confidence that the American women. Serbia beat Croatia at the recent World League final, while Hungary, playing without many of their stars, finished just 5th (including a shocking opening loss to Canada). We can’t read too much into that lost given their roster at the tournament, but I like the defending champions  Serbia at that number.

Parlays with a couple of hedges to guarantee profit.