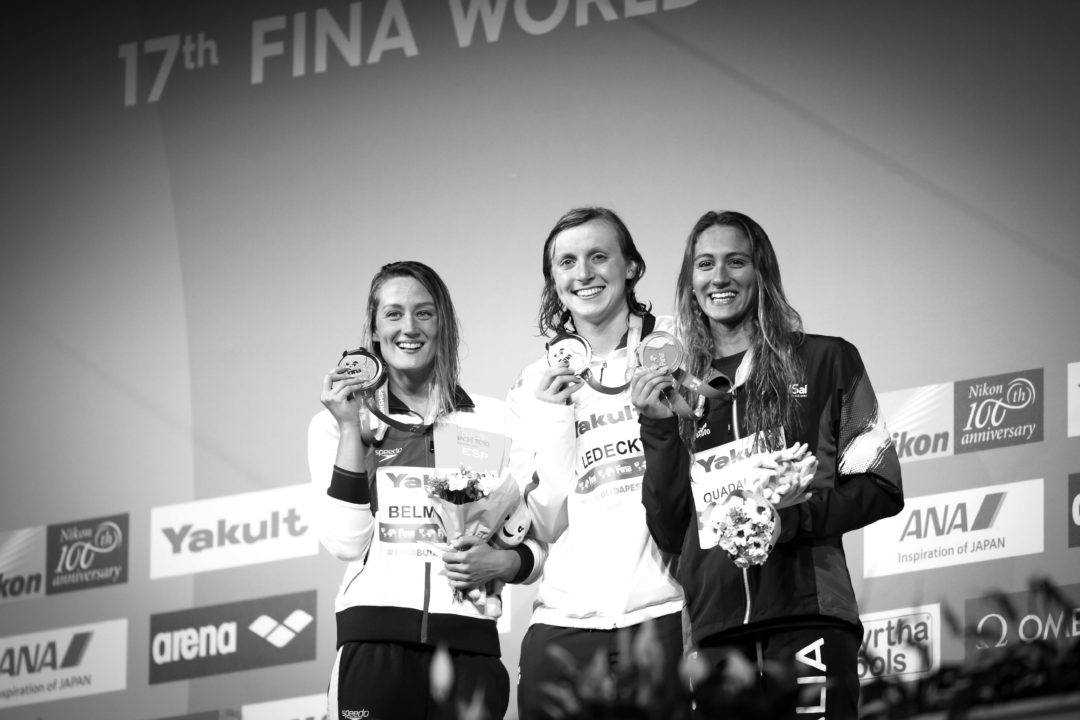 Mireia Belmonte scored the silver tonight in the women's 1500 free, looking better than she ever has before. Current photo via Mike Lewis/Ola Vista Photography

Belmonte didn’t come to Budapest to win medals in those events, though, and she got right down to business in the 1500 free, one of her strongest races. After sailing through the prelims in 2nd place with a time of 16:05.37, she put together the best race of her life in the final tonight. Showing up looking very different from her Day 1 prelims self, Belmonte engaged in a great battle with another European competitor, Italy’s Simona Quadarella, for silver.

The Spaniard surged ahead of Quadarella at the 1200 mark, and punched down the last 300 meters to easily touch for the silver at 15:50.89. That was a fantastic swim for her, breaking her own national record by around seven seconds. Further, she became the 7th-best performer ever in this event.

Looking ahead, Belmonte would presumably have a great shot at silver in the 800 free, though in addition to Quadarella, Boglarka Kapas, and some of the other 1500 finalists, Leah Smith will be a formidable opponent. Belmonte also has the 400 IM and 200 fly, two events in which she has some history in. The 200 fly, specifically, is the event in which she won gold last summer in Rio, making her the first Spanish woman to become an Olympic swimming champion. Based on how well she swam the 1500 free, she’s building a lot of hype around her other races– especially the 200 fly, where she has the best shot at gold.

In European news besides Belmonte, Adam Peaty twice broke the 50 breast world record, settling at 25.95 after the semifinals, while Hungary scored two men into the 200 fly final with Laszlo Cseh and Tamas Kenderesi. Russia earned two bronze medals with Aleksandr Krasnykh in the 200 free and Yulia Efimova in the 100 breast, in addition to Italy scoring a bronze with Quadarella’s 1500 free. Hungary went without a medal tonight, but Dominik Kozma did break Cseh’s 200 free national record tonight with his 1:45.54 for 6th.