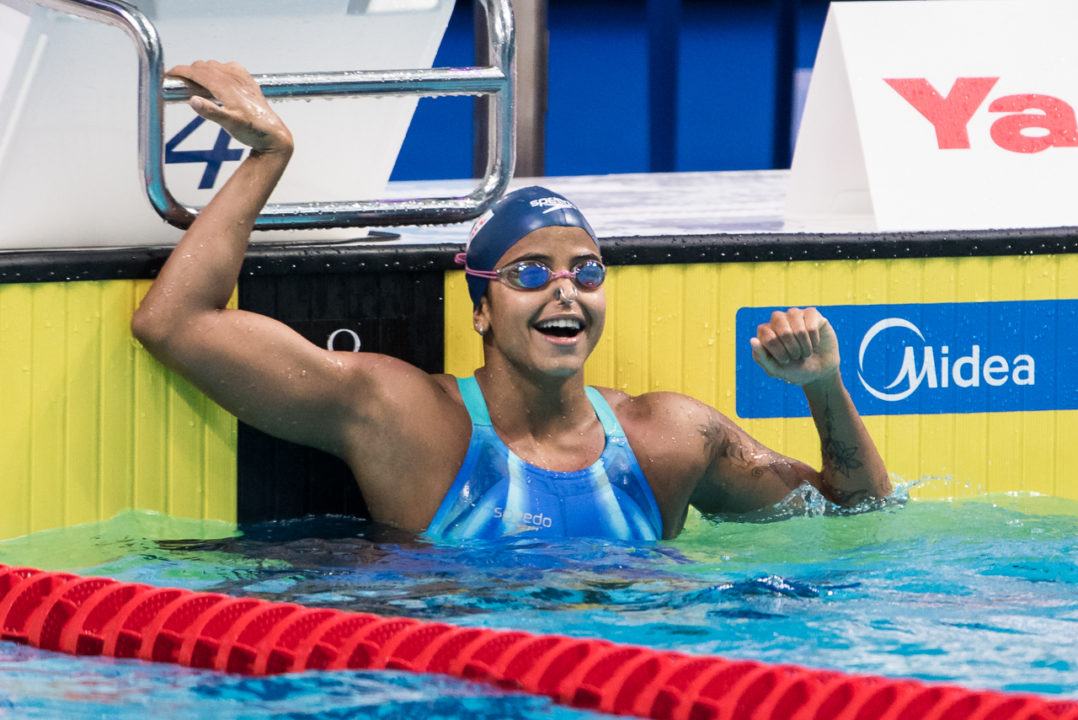 Tonight in Budapest, Etiene Medeiros won both a personal victory and a cultural victory for Brazilian women with the country's first ever long course swimming title in a women's event. Current photo via Peter Sukenik/www.petersukenik.com

Though the Brazilian men have won 21 long course world championship medals and 13 Olympic medals in the pool, until today, the Brazilian women had won just one spot on the long course worlds podium. Few other countries with Brazil’s size and status have the same level of disparity between men’s and women’s programs.

The explanation is at least partially cultural. As recently as recently as 1979, it was illegal for women to play many sports, including soccer, competitively or recreationally, although they weren’t barred from swimming. Though women’s sports have made astronomical progress in recent years, studies have shown that societal factors discourage Brazilian girls from participating in athletics.

In recent years, sprint star Etiene Medeiros has been on the forefront of a wave of Brazilian female swimmers that are seeing success on an international level, including Manuella Lyrio, Joanna Maranhao, and Larissa Oliveira. None have been able to approach Medeiros’s packed resume that includes multiple short course world title, a short course world record, and a silver medal in the 50 back in Kazan. However a long course world championships title continued to elude the Brazilian women.

Until tonight, that is. Today in Budapest, Medeiros put up a 27.14 in the 50 back for a South American record, the third-fastest performance in history, and her country’s first-ever long course world championships title. Medeiros outswam defending Kazan world champion Fu Yuanhui of China by .01 to come within .08 of the world record.

Today’s world title was a triumph, both for Medeiros and for women’s sports in her country.

You all forget she tested positive before Rio and FINA and her country made it all work without any penalty because she was the lone hope for a medal on the women side. Its just sad to see dopers triumph. Same as joao gomes cesar cielo and many others

I was really upset about Fu’s loss, but this piece of news has cheered me up!!!! Congrats!!!!

Me being on the look-out for her pre-meet thanks to SwimSwam’s special page devoted to her in the Worlds preview issue <3.

Look at those guns, dang girl.