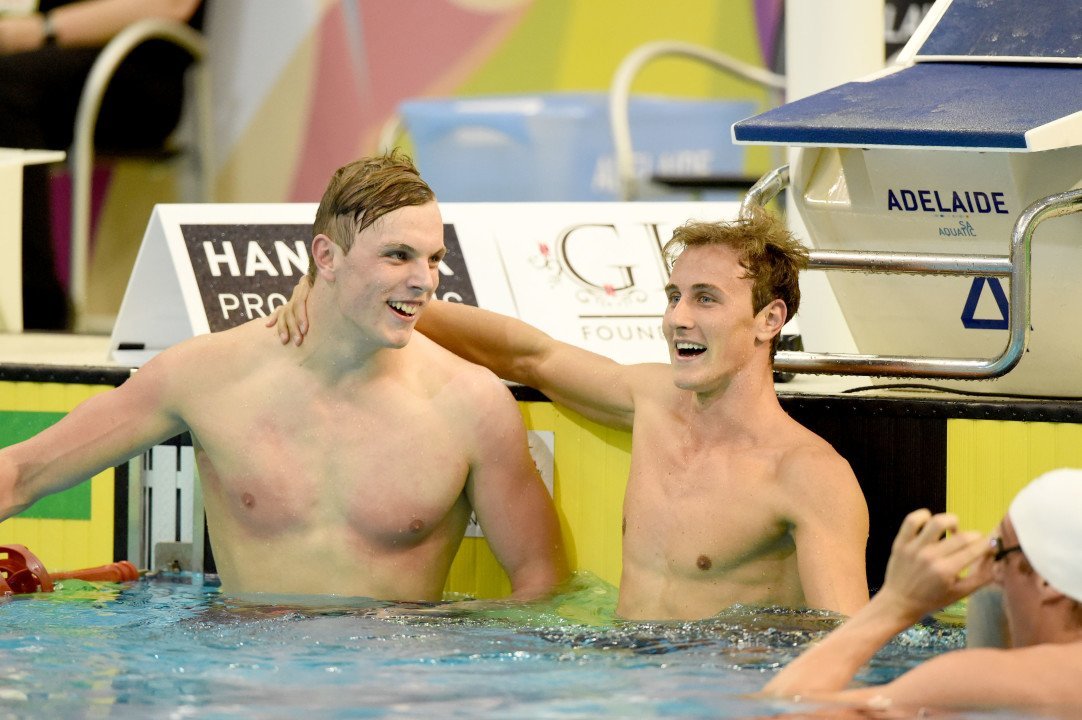 At the past 2 Olympic games, one of the major headlines has been the rivalry between Team USA and France in the 4x100 free relay. While the rivalry continues this summer, a new team is in the mix. Archive photo via Swimming Australia

At the past 2 Olympic games, one of the major headlines has been the rivalry between Team USA and France in the 4×100 free relay. In 2008, Jason Lezak anchored for the U.S. in a 46.0 to run down France in what was arguably one of the most exciting moments in Olympic history. In 2012, France’s Yannick Agnel turned the tables on the Americans, running down Ryan Lochte to seal the gold for his team.

While the rivalry continues this summer, a new team is in the mix. The Australians look like the team to beat, and will battle to claim their first men’s relay gold since the 2000 Games in Sydney. Team USA and Australia are both looking for redemption after neither team advanced to the final in this race at the 2015 World Championships. Despite a lackluster performance in Kazan, we could see both teams on the podium in Rio just one year later.

The top Australian 100 freestylers heading into the Games this summer are Cameron McEvoy and Kyle Chalmers. McEvoy is a dangerous weapon for the Aussies, owning the fastest textile 100 freestyle time in history with his 47.04 from Australian Nationals this year. Chalmers, a 19-year-old who resembles a young McEvoy at this point in his career, swam a lifetime best 48.03 to rank himself 8th in the world this year.

The next fastest Aussie this season is James Roberts, who swam a 48.32 to earn his place on the relay and narrowly miss an individual berth. Roberts was added to the Australian Olympic Roster, along with Matthew Abood and 2012 Olympic silver medalist James Magnussen, after their 4×100 free relay was officially confirmed for Rio. Abood put up the 4th fastest time at nationals with his 48.89, but Magnussen is the 4th fastest Australian overall this year with his 48.49 from an Australian Grand Prix meet in July. Magnussen had established himself as the fastest man ever in textile with his 47.10 from 2012, and it could go a long way towards helping Australia win the gold if can dip back into the 47-range.

Team USA will bring in Nathan Adrian and Caeleb Dressel for this relay, but the other 2 spots are still to be determined. Adrian swam a season best 47.72 at Trials that ranks him 2nd in the world, and Dressel put up a lifetime best 48.23 to qualify for his first Olympic team. In the past, Adrian has swum sub-47 splits multiple times and has established himself as a very reliable relay anchor. His most recent sub-47 split was a 46.69 at World in 2013. Last summer in Kazan, he anchored Team USA’s mixed 400 free relay in 47.29.

The other 4 men who qualified for the relay at U.S. Olympic trials were Ryan Held (48.26), Anthony Ervin (48.54), Jimmy Feigen (48.57), and Blake Pieroni (48.78). The coaching staff will have to take a look at their prelims splits and evaluate which swimmers are the best options for the finals relay. There’s also the question of whether or not Michael Phelps will swim this relay, which will probably stay up in the air until the day of the race. Phelps scratched the event at trials, so there’s not much we can use to indicate where he’s at in terms of his freestyle right now.

France, the defending Olympic champions in this race, bring 3 men who are ranked in the top 10 this year. Leading the way is Jeremy Stravius, who won French Nationals with a 47.97 for 5th in the world. Sitting in the 6th and 7th spots behind him with a pair of 48.0s are Florent Manaudou (48.00) and Clement Mignon (48.01). The 4th relay spot for France will likely go to Mehdy Metella, who swam a 48.43 at French Nationals. Yannick Agnel, the 2012 relay hero, will return to the Olympics for France, but probably won’t swim this relay.

The Brazilians will be looking to earn a medal on their home turf, and they’ve got Nicolas Oliviera and Auburn-based Marcelo Chierighini to help them do that. Chierighini is their fastest this season, leading the pack with a 48.20 from the Maria Lenk Trophy. Just a tenth behind him at that meet was Oliviera in 48.30. Joining them for the relay will be Joao De Lucca and Matheus Santana, who have season bests of 48.59 and 48.80, respectively. This is Brazil’s last big shot before they refresh a sprint group that’s been so good for so long – there will be a lot of cheering for the home team here, though it will be without Cesar Cielo.

Alexander Sukhorukov, a swimmer based out of Trojan Swim Club, will make the trip to Rio for Russia. Morozov is the fastest Russian of 2016, posting a 48.06 at Russian Trials to finish just ahead of Rio relay teammate Andrey Grechin (48.18). Sukhorukov (48.55) and Alexander Popkov (48.41) took the 3rd and 4th spots at trials, with a pair of 48-mids to qualify for the relay.

USC-based Vlad Morozov will be absent from Rio after being named in the WADA-sanctioned McLaren report. That’s a big blow to the Russian relay, as Morozov is the fastest Russian of 2016 with a 48.06, and blasted a 46.95 split on this relay for the Russians at 2015 Worlds. The Russians should still be good enough to final, but without Morozov, their medal chances have been significantly impacted.

Italy has a big weapon in this race with sub-48 sprinter Luca Dotto. Interestingly, Dotto has been significantly faster on relays than in his individual swims. At Italian Nationals, he set a new Italian Record with a 47.96 relay leadoff, half a second faster than he swam individually. The Italians were 3rd at Worlds last year, and will bring back Filippo Magnini from that relay. Joining them will be Luca Leonardi and NC State alum Jonathan Boffa.

Japan, the 6th place team at 2015 Worlds, will enter the mix with Shinri Shioura as their big relay weapon. Shioura has been 48-low this year, swimming a 48.35 that ranks him 18th in the world. Also swimming sub-49 for the Japanese heading into Rio was Katsumi Nakamura, who cracked the top 25 with his 48.53.

France wins again. Usa and Aus for the other two medals.

Yes, McEvoy, Chalmers, Maggie & Roberts will be hard to beat. Bring it on, one of the races of the meet, Australia, USA & France, all with big chances. The most open of all the relays, should be a great race.
The Aussies to win it with McEvoy closing it with a low 46.

USA all the way.