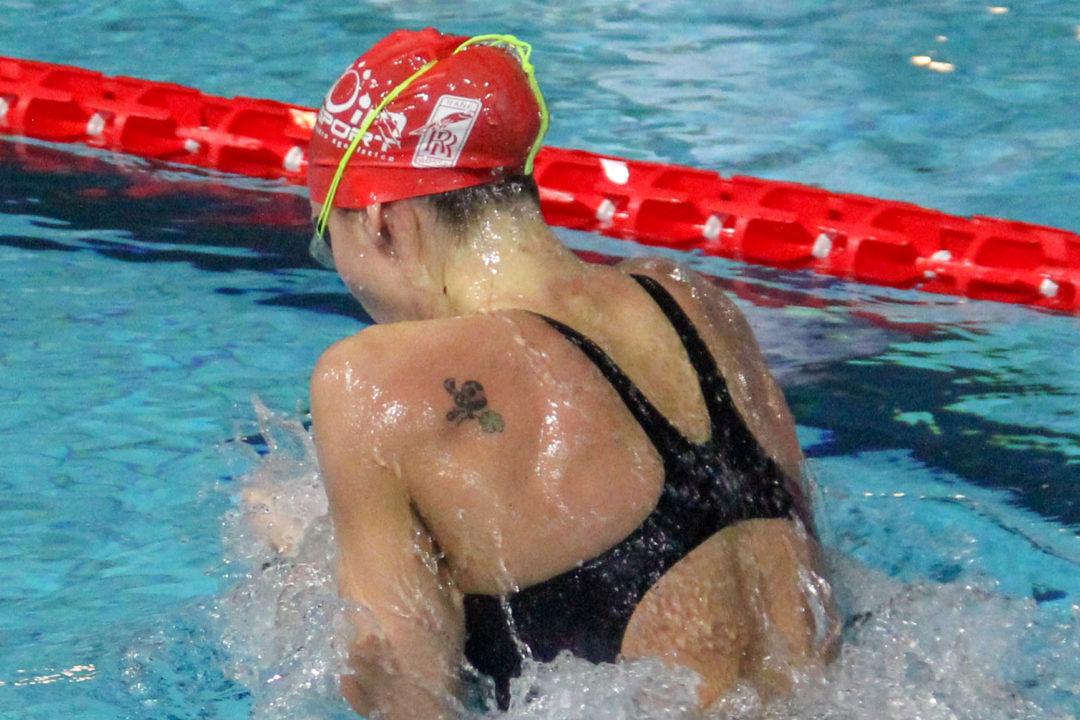 Francesca Fangio (above) became the 3rd Italian woman to break a National breaststroke record in less than a week when she took down the 200 meter mark. Archive photo via Giusy Cisale/SwimSwam.com

After 14-year old Benedetta Pilato broke an Italian Record in the women’s 50 breaststroke in prelims, 2 more National Records were broken on Friday in the afternoon session at the Nico Sapio Trophy.

First, in the men’s 200 backstroke, a breakthrough came from 21-year old Lorenzo Mora. He clocked a 1:50.45 in the event to win by almost 4 seconds. That time was good enough to add his name to the list of Italians who are qualified for the European Short Course Championships, and also broke the National Record.

The old record of 1:50.75 was set in 2015 by the more-recognizable name Simone Sabbioni. Sabbioni previously held all 3 Italian backstroke records in short course.

Mora’s previous best time of 1:50.92 was done almost a year ago at the Italian Short Course Championships. His own improvement seems to be based mostly on a little more stability in his splitting – he wasn’t as fast on the 2nd 50 as he was in his previous personal best, but also had less of a cliff on the final 50.

The day’s 3rd record came in the women’s 200 breaststroke, where Francesca Fangio became the 3rd Italian woman to break a National Breaststroke Record in less than a week. She took down the standard in the 200 breaststroke with a winning time of 2:20.56. That broke the 2013 mark set by Giulia de Ascentis at 2:20.93.

For the 24-year old Fangio, the swim improves upon her previous lifetime best of 2:21.22 done at the 2018 Italian Championships – the same meet where Mora’s previous best time came.

Other Highlights from Day 1 in Genoa:

Thanks for reporting “of note” about Laszlo Cseh too.

Never heard of this Lorenzo Mora before. Might keep my eye on him and see if his time will translates to long course.
Also, I think it is pretty unlikely that Fangio broke the world record by 12 seconds which this article is seeming to suggest she has done.

For a girl that is absolutely psycho. She is a gun.