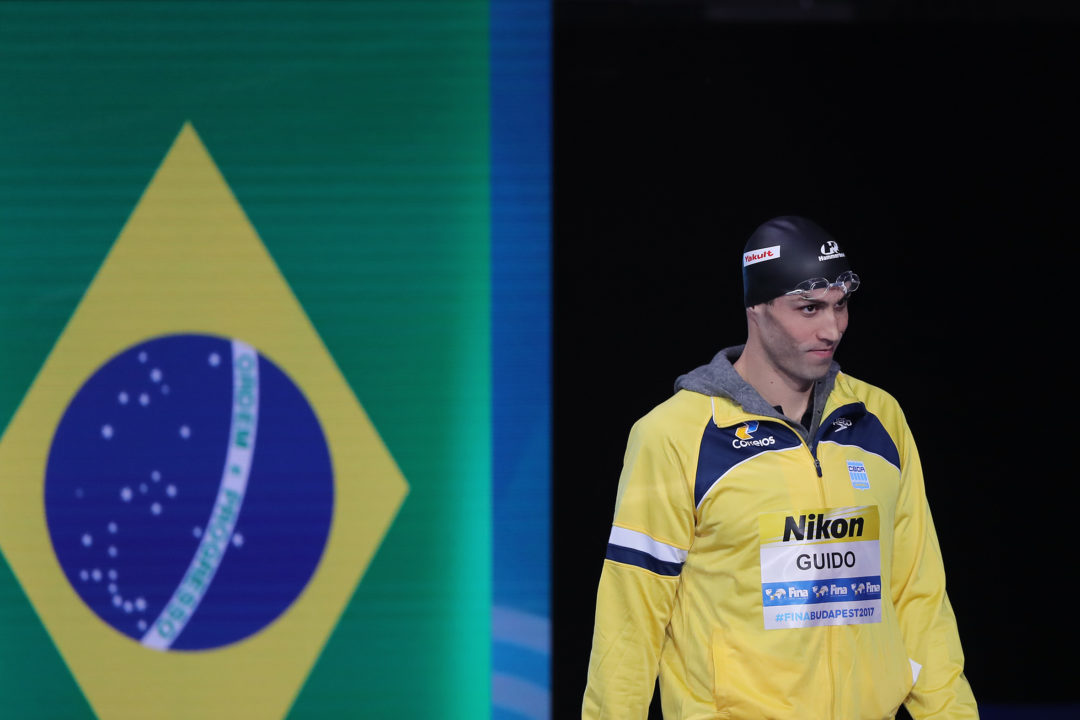 Guilherme Guido break the Brazilian and South American Records in the 50 meter backstroke on Saturday, making him the 2nd-best in the event's history. Archive photo via Satiro Sodre/SS Press

32-year old Brazilian Guilherme Guido, part of a seemingly-ageless group of 30-something sprinters from his country, broke the Brazilian and South American Records in the 50 backstroke on Saturday with a 22.55. He was swimming representing the top-scoring London Roar in the Bupapest stop of the ISL, which coincidentally wear the same colors as the national teams of his native Brazil.

Guido is now the second-fastest performer in the history of the event, behind only Frenchman Florent Manaudou. Manaudou, the 2012 Olympic champion in the 50 free, swam 22.22 in the 50 back at the 2014 short course World Championships in Doha, Qatar. He made his return to big-time swimming for this ISL, which according to him was a big-time driver for his re-engagement in the sport, but can absolutely fly over 50 meters of anything. He was also the 2015 World Champion in the 50 fly.

Manaudou, representing Energy Standard in the ISL opening series 3 weeks ago, swam 23.77 in the 50 back. Guido was already the World leader this season thanks to a 23.06 from Lewisville last weekend, but has now gone well under that.

So what’s the difference for Guido? SwimSwam’s Brazilian correspondent D’Artagnan Dias says that Guido has learned to stay off the lane rope. Among Guido’s most infamous races (in long course) came when he swam 53-high while hitting the lane rope 6 times. While not the typical fix that a swimmer of Guido’s caliber is focused on at this age, it is about the most impactful improvement a swimmer can make in their 30s, and that seems to be showing in his results.

I think 2014 Manadou could’ve challenged 2018 Dressel in SCY. Before Dressel what Manaudou did in Doha was the most explosive swimming display ever.

Manadou is challenging Dressel as they are now…

Come on. 2014 Manadou would have destroyed Dressel at SCY.

Truth is: He is swimming without hitting anything, a great start, streamlined underwater and turns= great time!